Toyota has scheduled to introduce the RAV4 TRD Off-Road at 2019 Chicago Auto Show with a host of changes that enhance the off-road ability.

RAV4 TRD Off-Road from the Japanese carmaker, Toyota, is the fifth generation of RAV4 which was launched last year. Toyota has been working on expanding the RAV4 range with a new TRD Off-Road variant and set to bring it on at 2019 Chicago Auto Show.

Being underpinned from the Adventure variant, this model will come with a long list of updates which have been developed by Toyota Racing Development (TRD). The RAV4 TRD Off-Road is underpinned from the Adventure variant

The color of the model offered will be ranging from

Remarkably, the roof will be painted in Ice Edge White color.

As for the exterior design, it is a tad similar to the design seen on the regular Adventure spec-trim except for the TRD body kit. However, the considerable changes are made under the skin to enhance the off-roading. This new off-road variant will be available in 18-inch matte multi-spoke alloy wheels with black finished. The special Falken Wildpeak Trail tyre is also equipped to ensure the driving safety under all-weather conditions. Particularly, the square shoulder design can reduce punctures and the open-shoulder layout can build up the unique design for the car. There are likely four color options on offer

To add more safety standards, the suspension also pitched to boost the ride quality on the bad road condition. As a result, the rebound control has been established as well. The body control accordingly will be in a better offer as well.

In terms of interior, the RAV4 has not witnessed any major changes as it has been derived from the regular model. Several tweaks seen on the interior can be named as 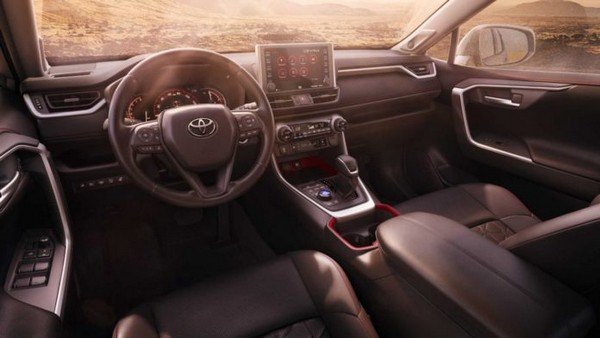 Regarding the powertrain, the new variant will receive the power via a 2.5 L petrol with two electric motors which have 222 PS output combined. The power is transferred to all four wheels thanks to CVT gearbox.

As for the price, Toyota has yet to reveal the price detail for the RAV4 TRD Off-Road.