What Is Amazing And What Is Not So Good About The Indian-Spec BMW i8 Roadster?

14 0
The BMW i8 Roadster is the top-of-the-line variant of the BMW i8, the best-selling plug-in-hybrid sportscar in the world. Once launched in India, what are going to be the pros and cons of this variant?

The BMW i8 is expected to be launched in India on November 14, 2018, with the top variant in the line up being the i8 Roadster. Boring words such as fashionable, modern, etc. are not enough to describe the vehicle. Actually, it is not an exaggeration to say that it has a sensational design, powerful performance and it opens a window to the wonderful world of sporting mobility in the future. Having said that, are all these features suitable for Indian conditions? When launched in India, can this vehicle effectively compete with other ones in its segment? Read on to discover.

The whole body of the vehicle comes with laminated and long panels which stick out and look as if they are floating. The beautiful butterfly doors which can be opened upwards instead of outwards, making the appearance of the car become sensational. When you open the roof, the chassis and the body demands quite a lot of strength to keep its reinforcement. However, the carbon fibre-reinforced plastic (CFRP) tub of the i8 is already very strong; so it needs little support. Therefore, rather than focusing on the rigidity of the car, the designers can pay more attention to making the roofline lower and quicker as well as the silhouette flatter. With the butterfly doors, the 2018 BMW i8 Roadster has a sensational look

The BMW i8’s carbon fibre-reinforced plastic tub is made from a top-notch material which is strong but very light. Moreover, the soft top only adds to the total weight of the car by 60kgs. Actually, the vehicle has a total weight of only 1,595kgs, which is 60 kgs heavier in comparison with the coupe version. Since car makers have a tendency to make their convertibles much heavier than the coupes, this is truly impressive. The 2018 BMW i8 Roadster is very light and strong

The ultimate goal of the designers is to make the soft top of the i8 Roadster faster and more silent; therefore, they have designed the soft top with added acoustic insulation. The top can be closed or opened with an all-electric system in just 15 seconds with a speed of 50kmph.

The top functions similarly to the i8 Roadster which also receives power from an electric engine. This silent top can be vertically stored and folded in the shape of the letter Z, which requires little space.

4. Easily and quietly transferring to convertible

The convertible has managed to minimize the noise and the rocking when opening or closing the roof, even when it travels at a high speed. The soft roof that has been made silent and firm, seems to be a hard roof. But when the roof has been folded down, the car will not only receive direct sunlight but also a beautiful sky view and become much sexier. 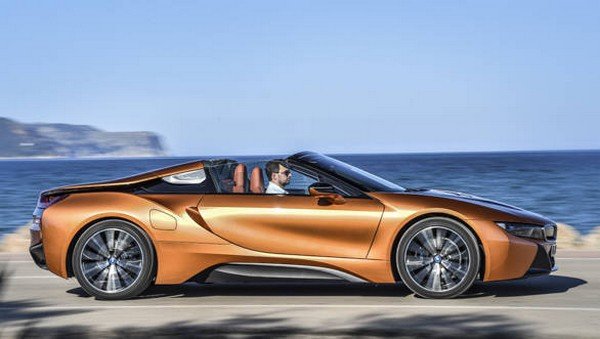 The i8 Roadster receives power from two engine options: an electric one and a 1499cc turbocharged petrol motor, which work simultaneously with each other. The power of the battery is now 143PS of max power and 250Nm of peak torque. The travel range has been increased to 53kms/charge. The i8 Roadster can accelerate up to 120kmph when travelling with an eDrive mode.

Whereas the electric engine sends power to the front wheels, the petrol motor is for the rear ones and the vehicle is also equipped with a hybrid all-wheel drive of BMW. The petrol engine produces 231PS/320Nm. When the two engines working together, the total output is 374PS and the car can speed up from a standstill to 100kmph in just under 5 seconds. It is reported to reach a maximum speed of 250kmph and a mileage of 50kmpl. The 2018 BMW i8 Roadster is powered by a hybrid engine, which can churn out an impressive output

1. Difficult to enter or exit a limited space

Due to the gullwing doors, it is difficult for the car to enter or exit a restricted space, which can cause the driver quite a lot annoyance. Even when you can make a perfect entry, you still have difficulty in getting out of the space. So if you usually have to travel in constrained areas, this vehicle is not a perfect choice.

In the merely electric driving mode, the convertible gives a silent approach without emitting any sounds. This takes most other drivers aback and in some cases, cannot react in time, which may be dangerous, especially in the “crazy” traffic in India. While the electric engine is too silent for you to hear any sounds, the petrol one emits loud sounds, which is quite annoying. For a convertible, customers usually expect a sportier sound from the engine.

4. View restricted due to the A-pillars

The convertible comes with thick A-pillars which prevent the driver from a having a wide view when cornering in narrow roads. Customers have a tendency to favour a sports car which functions well when driving on narrow corners; however, drivers of the i8 Roadster has to be very meticulous and attentive in such cases.

5. Being unsuitable for the Indian conditions

A convertible with the roof open is not really suitable for India, a country of extreme dust, heat and pollution. Because a hybrid unfriendly policy has been put into effect by the Indian government, once launched here at the end of this month, the vehicle will not be entitled to any tax exemption and would be priced at approximately 2.8 crores. This is another point that makes the luxury vehicle less desirable in an emerging market like India. The article has provided you with 5 of the things that we like and don’t like about the top variant of the BMW i8, the Roadster. Hope that after reading the article, you can make a wiser decision regarding the purchase of this luxury vehicle.