What To Expect From The Upcoming Maruti Suzuki Vitara?

The Indian-spec flagship five-seater Maruti Suzuki Vitara will be launched in India in 2019. The new Vitara has been spotted testing many times on public roads and even shot in Maruti dealserships.

On the global market, this crossover is in its fourth generation. Launched in 1988, this 5-seater compact SUV with the flexibility and reliability has been a great success of the Indian-Japanese automaker. The Maruti Suzuki Vitara is projected to be introduced to the Indian auto market by the second quarter of 2019. This vehicle has been spotted testing numerous times in the undisguised production model. While other test cars are equipped with red number plates, this SUV even brings a normal one. If you check online, you can see that Maruti Suzuki has registered this vehicle with the Gurugram North Authority and is ready to launch this vehicle. Read on to discover what to expect from the new Maruti Suzuki Vitara, one of the most anticipated car models by the Indian car buyers. The newest version of the Vitara SUV which is likely to be launched in India is expected to witness minor alterations against the international model but a thorough update in comparison with the Maruti Grand Vitara sold in India for the past years and against the Vitara Brezza.

The 2019 Maruti Vitara is underpinned by the XA Alpha concept introduced by the carmaker a few years ago.

It will sport a sharp front with a revised grille which resembles a twin blade shaving razor, a redesigned bumper, polishing headlamps, a modern and pleasant fascia as well as a clamshell bonnet. The side profile is likely to bear some resemblance to the Hyundai Creta but a little bit bigger with 17-inch five-spoke alloy wheels and a black roof. The outstanding shoulder line and the flared-up rear fender will add to its masculine appearance. Overall, it will have some similarities in terms of the exterior with the Vitara Brezza, but the former is much more premium. Overall, the Maruti Suzuki Vitara will have a muscular and premium look

The new Maruti Vitara will be 4,175mm long; 1,775mm wide and 1,610 high with a 2,500mm wheelbase and a 375-litres boot space. In comparison with its predecessor, the Grand Vitara, this SUV will experience major changes with the reduction of 25mm in length, 35mm in width and 140mm in the length of the wheelbase.

The 2019 Maruti Suzuki Vitara will feature a simple but top-notch cabin with some modern features and a list of passenger and pedestrian safety features. Moreover, the 2019 Maruti Suzuki Vitatra interior will focus on the functional characteristics rather than cosmetic ones of the features. To be more specific, the expected interior feature list of the Vitatra SUV includes 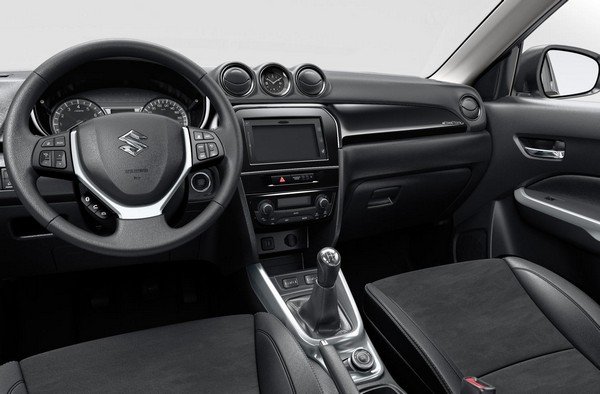 The safety features of the new SUV include Nevertheless, the Indian-bound Maruti Vitara will not be powered by either of these engine options but by other petrol and diesel engine choices. The petrol motor will be borrowed from that on the new Maruti Ciaz. The 1.5L K15 mild-hybrid motor with 4 cylinders can churn out a max power of 130bhp and a peak torque of 220Nm. On the other hand, the diesel motor, in all likelihood, would be the old 1.6L unit with 4 cylinders lent by the outgoing Maruti S-Cross model. This engine can generate 118bhp against 320Nm. Both of the motors send power to the car via a 6-speed manual and automatic transmission.

While the petrol engine will deliver a mileage of about 15.3kmpl in the city and 19.6kmpl on the highway, the diesel engine can churn out 21.2 kmpl/25kmpl. Both of the two engines will have an average fuel efficiency of 17.5kmpl and 23.8kmpl, respectively.

For the petrol variants, the price of the 2019 Maruti Suzuki Vitara will range from Rs 9 lakh to Rs 12 lakh. On the other hand, the price list of the diesel variants will be a little bit higher, ranging from Rs 10 lakh to Rs 14 lakh. With these competitive prices, the new SUV by Maruti, once launched in India can become a formidable competitor of the Hyundai Creta and even undercut it.

The 2019 Maruti Vitara is one of the most waited models by the popular Indian automaker, Maruti Suzuki. While its elder sibling Grand Vitara received a poor response from Indian auto market because of the high pricing, the Vitara is expected to help the company restore its position in the Indian SUV segment in particular and the Indian auto market in general. It is necessary that Maruti compensate for its inadequate in the under-20-lakh SUV segment and the Vitara will mark one of its first steps into this emerging but teeming and potential segment.