23 0
The Tata Nexon Kraz Edition features a host of cosmetic changes that appeal to the young Indian audience. Here's top 10 changes on the 2019 Nexon Kraz.

The Indian home-grown car manufacturer, Tata Motors has recently launched the Nexon Kraz Limited Edition in the domestic market to commemorate one lakh unit sales milestone of the brand’s popular sub-four-metre SUV in around two years. This car is, in fact, the second special edition of the Tata Nexon coming to emulate the resounding success of the first Kraz edition which was launched back in 2018.

The 2019 Nexon Kraz special edition is available in two versions, priced at Rs 7.57 Lakh for the manual variant and Rs 8.17 Lakh for the Kraz+ AMT variant (all prices are ex-showroom, New Delhi). In an effort to spruce up things around the new edition and differentiate the Kraz from the regular car, the automaker has given it a handful of styling tweaks. IndianAuto has worked on top 10 highlighting changes on the new Nexon Kraz as compared to the standard Tata Nexon.

The regular Tata Nexon itself is quite a handsome-looking impressive SUV. Tata Motors had made its intention of breaking into the sub-four-metre SUV segment very clear in 2014 with the Nexon concept but it’s until September 2017 that the final production-spec Tata Nexon was rolled out in the country. Evidently, Tata has spent much anticipation on the Nexon and truth be told, its great effort is thoroughly paid off.

The standard Tata Nexon is quite a successful model of its brand in the compact SUV segment.

Over just two years of its existence in India, the Tata Nexon has gained much recognition from the masses, especially for its great beauty. Therefore, for Nexon Kraz Limited Edition, the automotive company demands something even more exquisite.

In its latest avatar, the Nexon Kraz delivers a decent level of aggression and sportiness, higher than the regular car which is quite sporty itself. While retaining the DNA of the standard Tata Nexon, the new Nexon Kraz gets an exciting Tangerine colour highlights on the exterior, from the grille, wheels to the outside mirrors. The body of the model features all-new TROMSO black paint, giving a dual-tone effect with the sonic-silver accentuated roof. The “Kraz” badge on the tailgate with Tangerine coloured “Z” letter also delivers a contrasting effect.

Needless to say, this exciting colour combination in the Kraz is attractive enough to appeal to the young Indian enthusiastic buyers of today’s date.

Just like the exterior, the interior of the 2019 Nexon Kraz Edition sports a bunch of contrasting cues like Tangerine accents on the seats, stitching and AC vent surrounds. The same colour is used in the grille of the piano black dashboard. The piano black trim on the steering wheel, central console and the doors make up the rest of interior changes on the new Nexon Kraz. The Kraz+ variant, furthermore, gets a badge on the central console. 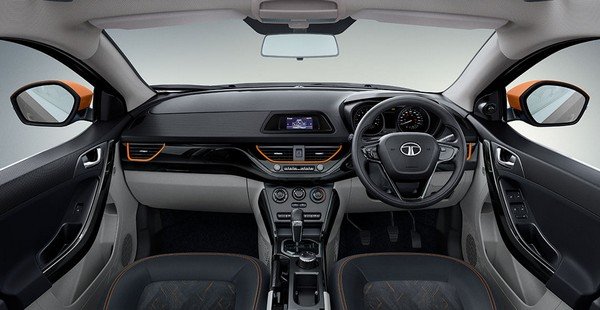 The interior of the new Nexon Kraz has been spiced up by tangerine-black colour constrasting effect.

As based on the Nexon XM variant, the 2019 Tata Nexon Kraz is loaded with a Harman-sourced four-speaker Connectnext infotainment system with Bluetooth support, steering-mounted controls, remote central locking, 12V power outlet at the front, all power windows, and more.

Nothing has been changed in the mechanical package of the Tata Nexon Kraz as it carries on using the same 1.2-litre Revotron turbocharged petrol engine and a 1.5-litre Revotorq diesel motor unit. While the gasoline burner is capable of generating a maximum power of 110 PS and a peak torque of 170 Nm, the diesel counterpart can crank out 110 PS of max power and 260 Nm of peak torque. Transmission choices include a 6-speed MT and a 6-speed AMT as standard in both the mills.

The all-new Nexon Kraz special edition is expected to hit big in terms of sales during the festive season.

Since the festive season is going to happen soon, Tata Motors seems to hit the sweet spot with the introduction of the new Tata Nexon Kraz Edition in the country. Last year, the Nexon Kraz was considered one of the most aspirational products of the company’s portfolio and this year, in a sportier and trendier avatar, the new Nexon Kraz is expected to make something bigger during the festive season of the year.