Even though the competition gets tougher every year with rivals launching all-new models, the Volkswagen Polo and Vento remain the same, their german styling aging well. Today we pit them against each other in an acceleration test.

The VW Polo has been on sale in India for a decade now, launching back in 2010. While international markets have got a new generation model, the Polo soldiers on in India with mild refreshes and facelifts. It recently got another one for this year which comes with new BS-VI compliant engines and minor tweaks to the exterior like a new grille. It gets a new 1-litre TSI turbo-petrol engine and we tested its acceleration against the all-new Hyundai i20. After beating the i20, we have got VW Vento today to have an acceleration test between the siblings.

As you’ll see in the video he’ll do three runs each on each vehicle to get the best time. For the first run, the Volkswagen Polo gets to 100 kmph in 9.12 seconds, the Vento doing the same in 9.46 seconds. The second run is a bit slower for both as the Polo does the 0-100 kmph run in 9.25 seconds compared to 9.52 seconds for the Vento. For the final run, the Polo gets its tyres hooked up well to sprint to 100 kmph in 9 seconds flat while the Vento also posts its fastest time of 9.39 seconds. Even though both the cars are powered by the same engine and is based on a shared platform, the Vento’s sedan body style adds extra heft, weighing in at 66 kilos more than the Polo. This is the main reason for the Vento being on average around 0.28 seconds slower to 100 kmph compared to its smaller sibling. Both the vehicles were tested in the Highline+ variants. 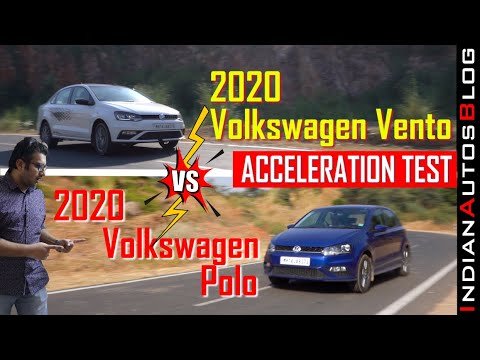 The Volkswagen Polo and Vento ditched their 1.5-litre diesel engines and the older 1.2-litre TSI engines as it failed to meet the new emission norms. In comes a new 3-pot TSI turbo-petrol instead, which makes 110 PS/175 Nm of peak power and torque figures. It can be mated to either a 6-speed manual or a 6-speed torque converter auto, with the 7-speed DSG resigned to history as well.