5 Car Features That Only Made Sense In The 1990s

22 0
As technology evolves and car keeps getting better and better, some features are no longer useful in an automobile. While a few become excessive thanks to more advanced technology, quite a lot of them are straight up weird.

Ah the 1990s~ The decade that brought us the movie Titanic, Toy Story, the rise of Britney Spears and Spice Girls, and the explosion of the Internet. It was quite a good and simple time among political chaos.

Automobile wise, it was not an enjoyable time for a lot of big car manufacturers from Europe and the United States. Meanwhile, Japanese cars rose to the number 1 spot and took over the world. In this decade, cars got rounder than those of the previous generations, and some safety features such as airbags and shoulder belts became compulsory.

Generally speaking, the 1990s was an experimental time for automobile. Some new car features like airbags have stood the test of time and are still widely adopted these days. However, some are just plainly funny and make you wonder why they were thought of in the first place.

You may not see those bulky in-built car phones that much these days, but they actually were status symbols in the past. In the 1990s, factory-installed car phones were very well loved by the rich. They could be installed in the trunk of the car or under the dashboard, and there could even be an antenna outside the car that signaled “expensive car with expensive cellular phone for expensive people right here” for every passer-by.

These big box-like car phone may seem very weird today when almost everyone has at least a paper-thin smartphone in their pocket, but in the previous century, the scientists had to work very hard to find a way to enable people to make or receive a call during the commute. And that was how the in-built car phone came to be. The manual window handle that you have to roll by hands to make the window glass go up and down was created in the 1990s, and it was still present in a lot of cars in the beginning of the 21st century. We had to admit that this feature was a lot of fun to kids sitting in a car back in the days, but realistically speaking, it is not convenient. When someone got out of the car and left the rear window open, and the driver wanted to close it, he or she probably had to pull over, get in the back seat, roll up the window, and get back to the driver seat. Just imagine having to pull over only to close a goddamn window! Everyone would be pissed at some point. Therefore, the invention of electric window and window’s button near the driver’s seat probably have brought a lot of people sanity. 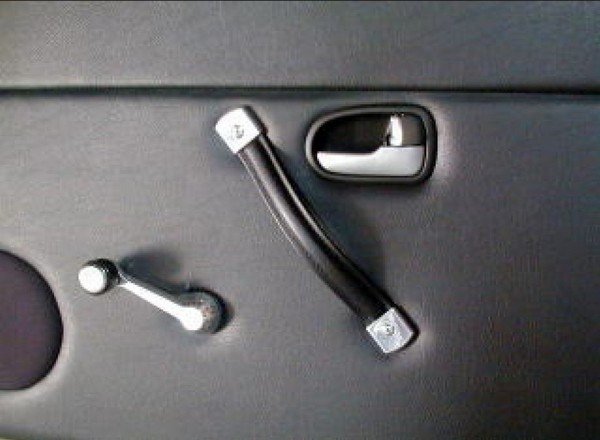 Kids loved this manual window crank but most adults did not

Pop-up headlight first appeared in the 1930s and became super popular in the 1990s. People loved the pop-up headlight because they thought that it really resembled the human eyes with the lid closing and stuff. Also, car companies pushed the agenda by saying that the hidden headlight helped a lot with aerodynamics and enabled cars to go faster, while the reality is that the closed headlight only improved mileage a tad bit when closed. Moreover, most cars looked more aesthetically pleasing with the hidden headlamps because when they are not popped up, they gave the car a smoother, sleeker look that a lot of cars in the previous century lacked.

Despite all of the obvious advantages of the pop-up headlight, it slowly fell out of favour and no longer exists in newer cars because of safety implications.  It is said that malfunctions in the pop-up headlight that prevent it from fully opening could lead to serious danger to other road users. Thus, you could hardly see any car with this feature anymore. 4. Wiper for your headlamp

Wiper for your headlamp first appeared in 1970s, and believe it or not, a lot of people love them, even to this day. Some argue that they have to travel a lot so they have to clean their headlamps regularly to allow them function like they are supposed to be. But to be honest, to the city folks who drive on a daily basis over short distance, there is little to no need for a headlight wiper, or at least, it is not as practical as a windshield wiper. Moreover, for those people who have to go on long road trips frequently, if they have to clean their headlamps regularly, they probably need to clean the whole car regularly. As you can see, the disadvantages far outweigh the advantages, so hardly any car has headlight wipers today. Some love headlamp wiper, some do not; but in the end, it no longer exists in most cars

Now this is a controversial one, as more and more cars in India have sunroofs now than ever, and people still love this feature. But in some parts of the world, the sunroof has been replaced with the panoramic windscreen for a better view of the road, better natural lighting, and less explosion. We will not discuss whether having a sunroof is better for your car or not, because we have already have a series of articles on sunroof on IndianAuto, and it is believed that having sunroof or not is totally a personal choice. That being said, the thing that makes a lot of car companies decide to kick sunroof out of their designs is mostly because of how often it explodes without any warning. In most cases, sunroof explosion does not lead to serious injuries due to the glass raining down on passengers per se, but the complications like loud noise and shock to the driver can make it a pretty dangerous situation. So after the 1990s, sunroof is not that well-loved anymore.