Range Rover is the status symbol that everyone wants to have. Here are top modified SUVs inspired by the design of the Range Rover.

Range Rover is everyone’s dream car. Nothing could ever feel better than having this luxury SUV in your garage. However, this iconic stunning vehicles would cost you a fortune. In fact, the Range Rover is widely-known as the status symbol for the rich. Meanwhile, the premium price tag could not prevent the average folks to dream of owning such a car. Some even attempt to costume their vehicles to look like Range Rover Here is the list of the modified Indian SUVs that look like Range Rover models.

Maruti Vitara Brezza is among the most popular SUVs in the market. The look of the Brezza is appealing to most people. However, it is nowhere close to the design of the iconic Range Rover. That said, the Range Rover-inspired Brezza is the finest work in replicating the look of Land Rover flagship SUV. To mirror the front look of the Brezza, the owner has replaced Brezza’s grille with one unit that resembles Range Rover’s unique looking front grille. Apart from that, it could not look like a Range Rover without the grill-aligned headlamps which are also added to this Vitara Brezza. The lower front bumper is also reshaped to make it more Range-Rover-like. The costuming job is also applied to the rear side. The boot lid is revamped with a sleek thin chrome trim that stays in line with the taillight unit, imitating the original design of the Range Rover. This vehicle also adopts new multi-spoke alloy wheels and low-profile tyres.

This costume project is done by Big Daddy Customs. The original design of the Tata Safari alone is quite bold but this modified version looks much like a Range Rover with a name lettering on the bonnet and similar grille and headlight units. The custom job is done so well that at first glance, you might mistake it for a real Range Rover. The costumed Tata Safari is named Moon Rover. 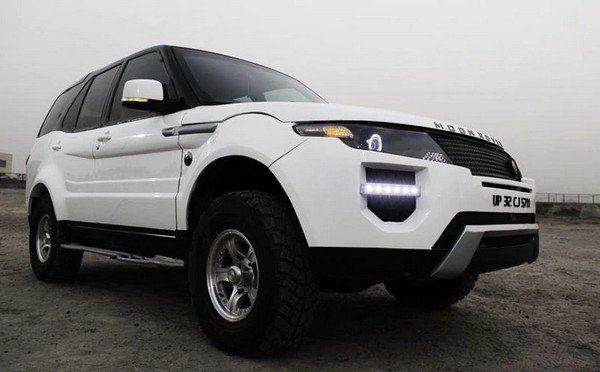 Dubbed as Moon Rover, Tata Safari Range Rover is one of the finest modified units in the lot

Hyundai Creta is also among the best-selling model in the SUV market. With such a huge popularity, it is an easily-accessible model that could be a no-brain target for customization. Bearing the price range of 9.5-15.64 lakh, it is a more affordable alternative for premium SUVs. Here are some successful Rang-Rover-inspired modification project done to Hyundai Creta all around the country.

Firstly, let’s take a look at this car that comes from Kerala. This unit is given a new grille that is similar to that from the Range Rover. The DRLs are given to the headlamp housing. The customizer even delivers the Range Rover lettering to the front fascia and the rear boot lid. Other than that, this Hyundai Creta adopts aftermarket alloy wheels, new tail light and faux air intakes. This modified Hyundai Creta is strongly inspired by Range Rover

Another Range Rover-inspired Hyundai Creta is from Jharhand. Even though it is not the best in the lot, but it features all the essential traits of the Range Rover, from the front boxy grille to the lettering above. The best part is the dual-tone car paints of black and red. The last Range Rover replica is named “Royal Rover” which is actually a Hyundai Creta on its first life. This modified car is not 100% faithful to the original design. The grille remains the same hexagon shape of the Hyundai Creta while taking in a similar design pattern. It also bears the Range Rover badge above the grille unit. The headlight housing is updated with DRLs and projector. The dual-tone paint job is one thing that makes it a real Range Rover-inspired vehicle. 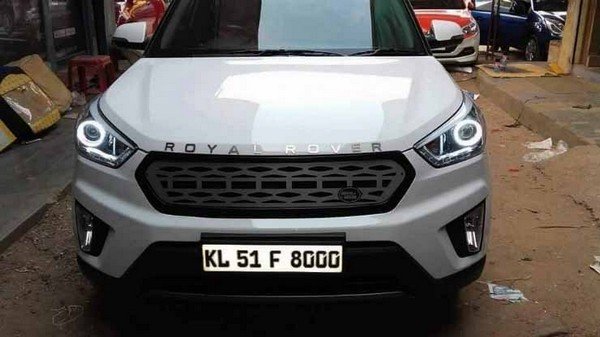 Royal Rover is the name of this Hyundai Creta