Tata has released a new promo video of the hatchback starring Actress/Model Norah Fatehi.  Altroz is the first product by Tata in India this year.

The Indian car manufacturer Tata is all set to launch its first premium hatchback, Altroz, in the Indian market. Altroz is the first product by Tata in India this year. Once launched, it will rub its shoulders with the likes of Maruti Suzuki Baleno, Honda Jazz, Hyundai Elite i20, and Toyota Glanza. Tata has also released several promo videos of Altroz before its launch, and now Tata has released a new promo video of the hatchback starring Actress/Model Norah Fatehi.

Also Read: Tata Altroz: All You Need To Know About The Upcoming Baleno Rival

In the video, the carmaker has stressed on the ‘Gold Standard’ that the premium hatchback will set after its launch. The video shows the actress in a photoshoot and later, after completing the shoot, she walks towards the Altroz. Afterwards, Norah starts driving the car and then the video shows some exterior shots of Altroz. The video simply highlights the good-looking exteriors of the car, mainly focusing on elements like headlight, DRLs, front-grille, and the rear profile. The main focus of Tata is to establish a standard that no other car in its segment has done earlier. Moreover, the video also displays the interior of the car, which consists of a touchscreen infotainment system, steering wheel with audio and phone control, AC controls, ambient lighting on dashboard, and push-button start. 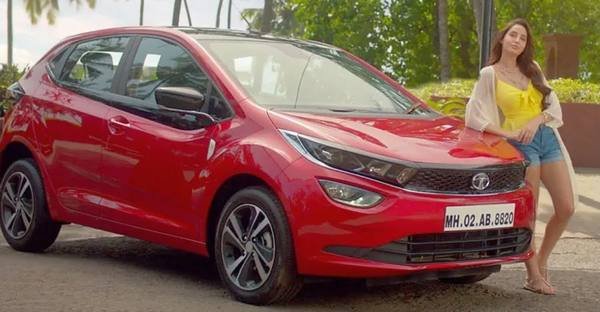 The premium Tata hatchback is based on the 45X concept, which was showcased at the Auto Expo 2018. The car is built on the company’s Advanced Modular Platform (AMP). Tata Altroz comes loaded with features like Automatic rain-sensing wipers, drive modes, 7-inch touchscreen infotainment system, wearable key and wide-opening doors. It derives power from a petrol and diesel engine. Tata Altroz Petrol gets a 1.2-litre, naturally aspirated unit, which puts out max power and peak torque outputs of 86 bhp and 113 Nm respectively. On the other hand, the 1.5-litre, turbocharged oil-burner makes 89 bhp and 200 Nm. Transmission duties are done by a 5-speed gearbox.