Recently, an Audi A4 owner has been issued a fine by Gurugram traffic police after the video which shows its drag race against a Kawasaki Ninja 1000 went viral online.

Traffic police in India are now keeping track of social media in order to detect traffic violations, which seem to be useful with several cases having been detected with the help of social media. Recently, Gurugam cops have fined a driver of an Audi A4 who took part in a dangerous competition between his vehicle and the Kawasaki Ninja 1000 after the video of this competition went online. If you are interested in more car races in India, pay a visit to IndianAuto.

The race took place in Cyberhub, Gurugram. The police revealed the Audi A4 driver’s identity after searching the car’s registration number on their records and have fined him INR 1,000 for dangerous driving. In the meanwhile, the bike rider was not issued a challan because its registration number is only temporary and his name has not been identified. However, a similar challan is expected to be sent to him soon. Commenting about this case, Mohammad Akil, Police Commissioner stated,

“We have taken a stern stance of the video as it is promoting erratic speeding. We have been concentrating on postal challans off late and making them more binding. We urge people to approach more such violations.”

As regards the race, the Ninja 1000 was the winner because of its higher power/weight ratio. Moreover, while the Ninja 1000 is a super sports motorbike, the A4 is a luxury sedan which pays more attention to convenience and entertainment than performance. 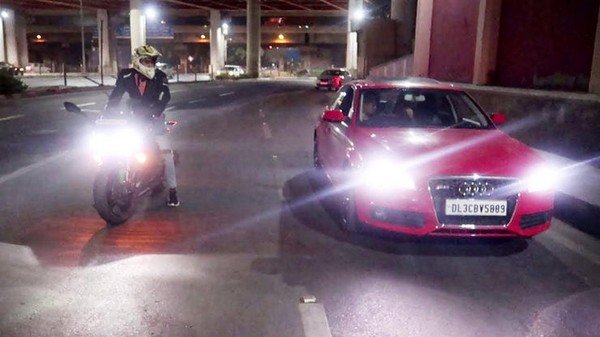 In the competition between the Audi A4 and the Kawasaki Ninja 100, the latter was the winner, thanks to the higher power/weight ratio.

First introduced to the Indian auto market in 2011 with the latest-gen model being launched two years ago, the Ninja 1000 keeps under its hood a 1-litre in-line 4-cylinder DOHC motor which can generate a maximum power/torque figure of 140 BHP/111 Nm. The transmission duties are conducted by a six-speed manual transmission. It is priced at INR 10.29 lakh*

In the meanwhile, the Audi A4 receives its power from both gasoline and oil burners. Firstly, the 1.4L TFSI turbocharged petrol motor can generate a maximum power/torque figure of 148 BHP/250 Nm. The 2-litre TDI diesel motor is good for 188 BHP against 400 Nm. The transmission duties on both of the petrol and diesel versions are implemented by a seven-speed DCT unit. The Audi A4 is priced in the range from INR 41.49* lakh for the base variant to INR 46.96 lakh* for the top variant.