Hyundai Motor India Ltd will launch the Kona EV July 9. The launch of the electric SUV will mark the first EV by Hyundai for the Indian market as well as the first electric SUV in India ever. However, India is not the first market Hyundai Kona will be sold in. It was previously launched in several countries including Australia. For now, the best way we can imagine the upcoming Hyundai Kona is by looking at the Australia-spec SUV. Here is a detailed review of the 2019 Hyundai Kona done by CarTell.tv.

The review video starts with the exterior of the Hyundai Kona. The Australia-spec version, which is essentially identical to the India-bound version, comes with a futuristic and elegant design. On the front fascia, the grille is eliminated, giving a simplistic design for the front end. The charging port is also located in the place which was supposed to be the grille. Apart from the unique grille, other parts, for example, the headlight setting, are similar to the other design of Hyundai, like the Venue. From the side profile, Hyundai has decently crafted the Kona. Riding on 17-inch wheels, Hyundai Kona looks prominent and aggressive but also very good looking. Hyundai Kona EV is available with two battery packs, a 64 kWh and a smaller 39 kWh version

Australia-spec Hyundai Kona sources the power from a 64 kWh lithium-ion battery pack. With this power set-up, the Kona could deliver the maximum power of 201 PS and 395 Nm. This Kona takes 7.6 seconds to run from standing still to 100 kmph. On a single charge, the Kona registered a range of 449 km on WLTP cycle. This range could be considered a decent performance. However, the India-spec Hyundai Kona is expected to get a smaller battery pack – the 39 kWh with 135 PS and 395 Nm. This battery pack could deliver a range of 300 km per charge.

Unlike the conventional car, multiple speed transmission is unrequired on electric cars. In the place of a regular gearbox, Kona would use a single speed transmission which could be controlled easily by using buttons instead of the gearstick. Also, the Kona gets a paddle shift allowing drivers to control the braking power. 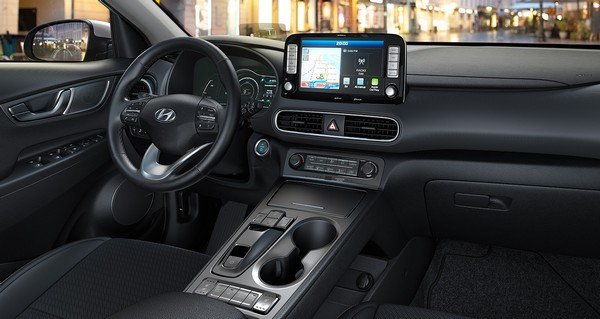 About the charging, the Kona EV comes with a fast charging option. With this technology, it could charge up to 80 per cent in less than an hour and 100 per cent in 75 minutes. On the other hand, the normal charging would take up to 9 hours and 35 minutes.

Hyundai Kona will be launched on July 9 2019. It will be imported to our market as completely knocked out units. According to Hyundai, only dealerships in 16 major cities will sell this car. When launched, it is expected to range from 20 lakh to Rs 25 lakh.