Indian auto enthusiasts usually don't have a lot of options for sporty cars. In this list, we are going to provide you with a list of best sports cars under 50 lakhs in India. Read on to discover.

Sports cars, in its general meaning, refer to the cars which are pleasant to drive and/or have a sporty appearance. Indian auto customers have a passion for this type of cars and are also price-conscious buyers. For this reason, the following list will list out eight best sports cars under 50 lakhs in India.

The first car in the list is the Ford Figo Titanium Blue. After several updates, the 2019 Ford Figo has received numerous design alterations, extra features and new safety equipment. The Ford Figo Titanium Blue comes with additional aesthetic features, which gives a sportier appearance than its lower-spec variants. Besides, the hatchback also gets a more advanced cabin with cutting-edge features. In terms of the performance, the Ford Figo Titanium Blue, in both of its petrol and diesel variants, turns out to be more powerful and can deliver a much more pleasant journey than its competitors. Specifically, the 1.2-litre petrol ‘dragon-series’ motor can generate a segment-leading maximum power of 96 PS against a peak torque of 120 Nm and is mated to a 5-speed MT unit. The gasoline burner can deliver a smooth drive with a strong and constant performance. The motor has a few difficulties when operating at a low RPM; nevertheless, it offers a much more pleasant drive from the 2,500 rpm mark.

The 1.5-litre oil burner, in the meanwhile, definitely offers a pleasant drive. The engine can produce 100 PS against 215 Nm and is coupled with a 5-speed MT like its petrol counterpart. The motor can offer an excellent performance; nevertheless, a little turbo lag appears below 1,500 rpm; after this mark, the power experiences an immediate increase until the car reaches 5,000 rpm. Inside the cabin, you can realize not much engine noise, which is a big surprise for a diesel-powered car.

The suspension has been specifically installed to absorb almost road undulations with almost no jerks transferred to the passengers. The driving wheel also appears to be well weighed-up, offering confidence for the driver to do any quick directional alterations.

For all of these above reasons, with a competitive price of INR 6.64 lakh for the petrol version and INR 7.64 lakh for the diesel one (both ex-showroom, New Delhi), the Ford Figo Titanium Blue deserves to be listed in the list of best sports cars under 50 lakhs in India.

Marking the entrance of the home-grown automaker into the B-segment hatchback segment, the Tata Tiago has helped Tata Motors reach a new level both in terms of the styling, features, and powertrains. The Tata Tiago JTP is a sports version of the regular Tata Tiago. It gets upgraded design package and a more powerful motor as well. Priced at INR 7.56 lakh (ex-showroom, New Delhi), the Tiago proves to be a really affordable sports car offering for the Indian auto buyers.

The Tiago JTP is powered by a 1.2-litre turbo gasoline burner which can produce 116 PS and is really fun to wind to its modest 6,000 rpm limiter. Although the mid-range shove which is usually expected from a turbo petrol motor is not provided by the engine, performance is pretty good. The new tyres and slightly revised suspension help the steering wheel more responsive, which leads to the car’s better performance when cornering. The standard Tiago’s good riding quality has been maintained. Thanks to the meatier tyres, the larger wheels and the new bumpers, the Tiago JTP looks sportier. Some of the unique features such as colour and trim updates along with the leather-wrapped driving wheel also help distinguish the vehicle from the regular Tiago.

Also Read - 2019 Tata Tiago Review: Will This Hatchback Be The Next Dream Car?

Like its Tiago sibling, The Tata Tigor JTP is a more attractive and faster version of the standard Tigor. The JTP gets its power from a turbo version of the naturally aspirated 1.2-litre petrol motor which serves as the power source of the standard Tigor. The domestic car auto manufacturer has not only offered the Tigor JTP with a sportier and more attractive styling but also a more powerful engine as well. The abovementioned 1.2L gasoline burner is borrowed from the Nexon, but even more powerful with a power of 114 PS. The car is claimed to be able to speed up from a standstill to 100 kmph in just 190 seconds. The sedan is also available in two driving modes: Sport and City. The gear stick is precise, light and responsive. All of the above along with a reasonable price of INR 7.61 lakh (ex-showroom, New Delhi) have helped the Tigor JTP become a desirable sports sedan of most the Indian auto buyers.

Launched in May 2019, the Hyundai Venue has been a formidable competitor in the compact SUV segment with a decent sales number which once even surpassed that of the Maruti Vitara Brezza, the king of the segment for quite some time now. Thanks to its reasonable price and modern features, especially the BlueLink connected system, the Hyundai Venue has become one of the best ideal choices for Indian compact SUV enthusiasts. Apart from everything mentioned above, the Hyundai Venue is even equipped with a new 1.0-litre turbo-gasoline burner which can generate an impressive maximum power of 120 PS against a peak torque of 172 Nm. Moreover, this motor is paired with a 6-speed MT unit, which can provide the driver with a greater sense of speed, thereby leading to a smoother performance of the car. Besides the manual version, the 1.0L Hyundai Venue is also available in an automatic version with a 7-speed DCT which is a modern gearbox and sure to offer a pleasant drive.

Priced in the range from INR 8.24 lakh to INR 9.72 lakh*, with contemporary styling, a package of modern features, powerful motor and an advanced gearbox, the Hyundai Venue 1.0L proves to be a real value for money.

In terms of the exterior and interior design, the Polo GT does not get many alterations from the regular version. However, the vehicle is equipped with more powerful motor options: a 1.2-litre TSI turbo gasoline burner which can produce 105 PS against 175 Nm and a 1.5-litre TDI oil burner which can deliver 110 PS against 250 Nm, both of which turn out to be among the segment-leading figures. While the former is mated to a 7-speed DSG, the latter is coupled with a 5-speed MT. Developed to be an attraction catcher, the Polo GT is not only well-known for its impressive performance but also for its decent fuel mileage which is 18.78 kmpl and 21.49 kmpl for its petrol and diesel versions, respectively. The impressive fuel mileage also complements to the breakthrough in the performance of the VW Polo GT, compared with the regular versions. The car can reach an amazing top speed of 190 kmph and accelerate from a standstill to 100 kmph in less than 10 seconds.

Being priced at INR 9.76 lakh and INR 9.88 lakh (ex-showroom, New Delhi) for the petrol and diesel versions, respectively, the Volkswagen Polo GT is a real value for money. With a powerful motor and decent fuel mileage, it deserves to be one of the best sports cars under 50 lakhs in India.

The general design of the Abarth Punto remains intact. However, there are several small changes which make the vehicle special and tasteful. These include the unique scorpion, the orange decals on the sides and the Abarth designed 16-inch rims, all of which contribute to the sporty appearance of the Abarth Punto. As regards the interior, the minimal changes consist of sporty looking pedals and some chrome bits on the instrument cluster. 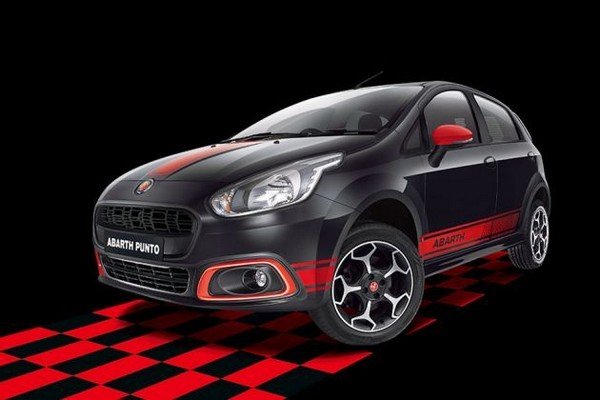 Powered by the T-Jet 1.4-litre gasoline burner which can deliver 147 BHP against 212 Nm, the vehicle is one of the most powerful hatchbacks in India. The steering wheel is precise in direction alteration and gives the driver much confidence when travelling at a 3-digit speed. The Abarth Punto can speed up from a standstill to 100 kmph in only 8.8 seconds, really impressive for a hatchback, right? The car is priced at a price of INR 9.71 lakh (ex-showroom, New Delhi).

The Kia Seltos is available in two different trims: the GT-Line and the Tech-Line with the former being more well-equipped than the latter and is also priced at a higher range, too, from INR 15.27 lakh to 17.27 lakh (ex-showroom, New Delhi). Generally, the GT-Line is the performance version of the Tech-Line with some cosmetic alterations such as a different set of alloy rims and also some red stripes around the alloy wheels and the bodywork. All of these make the GT-Line have a sportier appearance. In terms of the powertrains, the Kia Seltos GT Line receives its power from a 1.4 turbocharged gasoline burner which can generate an impressive power/torque figure of 140 PS/242 Nm, which is a great improvement from the 115 PS/144 Nm of the Tech-Line. The transmission duties on the turbo version are undertaken by a 6-speed MT and a 7-speed DCT. The latter is an advanced gearbox, which offers the driver an enjoyable experience when operating the car.

Also Read - 2019 Kia Seltos Review: Everything You Should Know

How on earth can the list of top sports cars below INR 50 lakhs in India lack a BMW? The 3 Series is among the top-selling cars of the German luxury carmaker, which is only the company in India that produces a sports luxury sedan. With a view to making the 3-Series as a luxurious and comfortable sedan as possible, BMW has developed the 7th-gen 3-Series to be an ultimate and well-rounded sports sedan.

The new BMW 3 Series is available in two versions: 330i petrol and 320d diesel, which receive their power from a 2.0-litre turbo gasoline burner and a 2.0-litre oil burner, respectively. While the former can produce 258 PS against 400 Nm, the latter can generate 258 PS against 400 Nm. The transmission duties on both of the two versions are undertaken by an 8-speed AT unit. As regards the petrol version, generally, the 330i is smooth, effortlessly fast, easy to drive and hardly emits any noise. Moreover, you are free to choose from four driving modes: Sport Plus, Sport, Comfort and EcoPro. The 330i is sure to be an ideal sedan for everyday office commuters and can be even comfortably brought to a racetrack.

For the 320d diesel version, the German automaker has also altered the oil burner a little bit to make it different from the outgoing model. The updated motor is more ready to produce power at low speeds; therefore, it is friendlier at town speeds. The more impressive performance is also reflected through the better acceleration time. In comparison with the previous-gen model, the 0-100 kmph acceleration time of the new 3 Series 320d is only four-tenths, being 6.8 seconds. The latest BMW 3 Series 320d is not only faster but also quieter as well, ensuring that both the driver and the passengers have a pleasant journey.  The ride quality has also experienced an improvement, thanks to the all-new damping system of the suspension. And the steering system can also perform confidently at both low and high speeds.

Being a luxury sports sedan, the BMW 3 Series is not cheap at all. It is priced from INR 41.4 lakh to INR 47.0 lakh (ex-showroom, New Delhi). However, thanks to its well-roundedness and excellent performance, the 3 Series is still one of the best options for sports cars enthusiasts in India.

Above is a list of eight best sports cars within INR 50 lakhs in India. Are you a fan of sports cars? If the answer is yes, which one in the above list would you choose? Please share with us in the comment section below.