Check Out The Cheapest Used Tata Harrier In India

33 0
This is the cheapest Tata Harrier in the second-hand car market in India. Check it out in this article.

The Tata Harrier, with its solid build quality, an aggressive design, a wide range of top-notch features right from the base variant and a competitive price range, has become one of the most popular SUVs in its segments. Interestingly, while the waiting period for this SUV has soared to many months, a few customers have already put their Harrier for sale in the Indian second-hand auto market.

This Tata Harrier has been put on sale by GN Cars, which seems to be a dealer located in Dungri Urban Estate, Ludhiana, Punjab. Right now, it seems like this used Harrier is the cheapest in India, with an asking price of only INR 15.1 lakh. This Harrier is the top-spec diesel variant, which has an ex-showroom price of INR 16.91 lakh in Ludhiana, which translates into an on-road price of INR 19.34 lakh.  According to the advertising post, this used Tata Harrier was produced in April 2019 and has travelled approximately 3,000 km. Therefore, at INR 15.1 lakh, it's a pretty good deal to clinch. This is the cheapest pre-owned Tata Harrier in India with a price of only INR 15.1 lakh.

The post also says that the car suffers no fault but the reason why the owner has put it on sale is unavailable. Perhaps, he/she is going to move to a different location so before moving, he/she wants to sell it; nevertheless, this is only our guess. It is also mentioned in the post that the SUV is without a scratch and is in a very good condition. It has a Telesto Grey paint scheme. Because the car is pretty new, whether it has been registered remains unknown. In numerous cities, the car can be driven without being registered for several months. Moreover, it can be transferred to other states with the necessary documents provided by the seller. 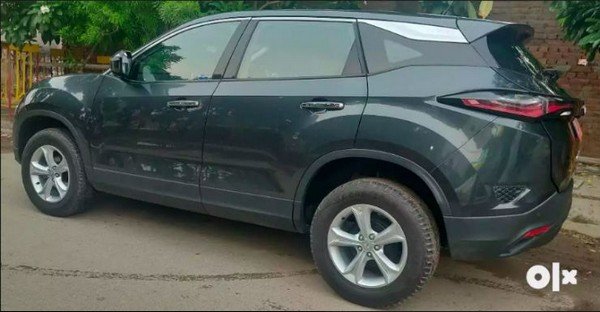 The car is in a quite good condition and can be transferred to another state with the required documents.

The top-notch features list of the Tata Harrier includes an 8.8-inch infotainment system which supports Apple Carplay and Android Auto connectivity, a 7-inch digital-analogue hybrid instrument cluster, rear air conditioner vents, four airbags, ABS with EBD, etc. As for the powertrain options, it keeps under its hood only a 2.0-litre oil burner which can deliver 140 PS against 350 Nm and is mated to only a 6-speed manual gearbox. The most disappointing thing about the SUV is the absence of the all-wheel-drive system. At the moment, it is only equipped with a FWD system. However, to effectively compete in this fiercely competitive segment, it will soon come with petrol engine option, automatic transmission and an AWD system. Moreover, the SUV also has great potentialities for modifications. If you want to know more about the modified Tata Harriers in India, please pay a visit to the stories section of IndianAuto. The Tata Harrier is powered by only a diesel motor mated to a manual gearbox.

In the Indian auto market, the Tata Harrier directly competes against the Mahindra XUV500, the Jeep Compass and the recently launched MG Hector. It will also have to face another rival in the form of the Kia Seltos.