Cristiano Ronaldo Car Collection - Do You Know His 15 Most Insane Cars?

Cristiano Ronaldo is not only well-known for his excellent football skills but also for his impressive car collection. Below is a collection of his 15 most amazing cars, read on to discover.

Being one of the most highly-paid footballers in the world, it is no wonder that Cristiano Ronaldo leads a luxurious lifestyle with numerous extravagant automobiles. He owns at least 15 luxury cars which will be discovered below. Do not hesitate to scroll down to pay a visit to 15 most impressive cars in Cristiano Ronaldo car collection.

Being one of the most luxurious SUVs in the world, the Rolls Royce Cullinan deserves to be included in the Juventus star’s car collection. The car is equipped with numerous top-notch features which include 4-way climate control, an 18-speaker audio system and luxurious seat coverings, etc. The car is powered by a powerful 6.75-litre V12 motor. The second car in the football star’s car collection is the Maserati GranCabrio. This four-seater convertible may not be the most appealing in terms of the appearance but it is one of the most powerful V8 motor sportscars. The V8 powerplant derived from Ferrari is able to produce more than 400 HP. It is no surprise to see Ronaldo usually spends his occasional cruise in this amazing car. The Chevrolet Camaro SS is one of the most affordable cars in Cristiano Ronaldo car collection. The car when being driven with the roof down does not look appealing. In the image below, the football star looked very relaxed as he went on a drive with his mother and one of his kids in his roof-down Chevrolet Camaro SS. Being priced at over $2 million (almost INR 15 crore), the Bugatti Chiron is one of the most extravagant cars in Cristiano Ronaldo car collection. He showed the car to the public in September 2017 just after he played the 400th match for Real Marid. He decided to invest in a dual-tone silver-and black with his signature ‘CR7’ logo mounted on the headrests and on the side of the car. 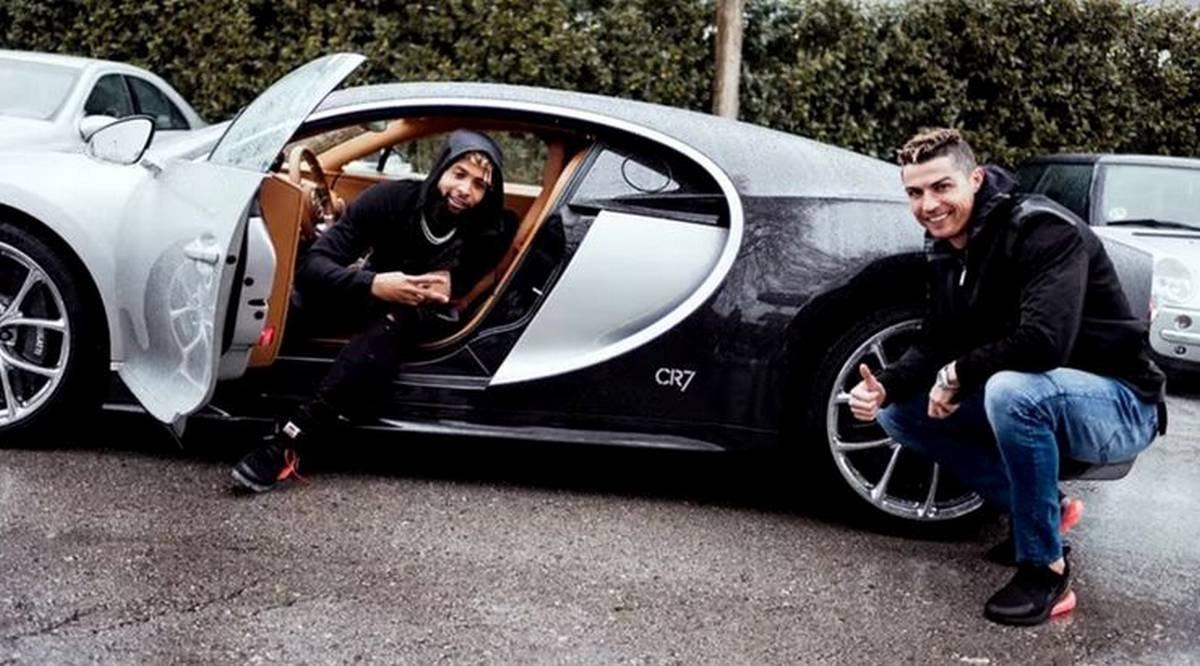 In 2012, Ronaldo bought a Lamborghini Aventador as the 27th birthday present for himself. The blacked-out paint scheme adds robustness to the already aggressive car. The Aventador is powered by a naturally aspirated V12 motor which can generate up to 700 HP. Being a Ferrari fan, Cristiano Ronaldo also owns several cars from the Italian auto manufacturer. The most impressive one is the limited-edition Ferrari F12 TDF. Only 799 units of the supercar were manufactured. The car can reach a maximum speed of 210 mph and requires only less than 3 seconds to accelerate from a standstill to 60 mph. Cristiano Ronaldo car collection also includes a Bugatti Veyron, Grand Sport Vitesse, which features contrasting orange interior. He bought this car in 2016 after achieving Champions League victory with Real Madrid. Being able to reach a maximum speed of over 245 mph, the car is one of the fastest open-top production cars in the world. The McLaren Senna is an ultimate track car which is included in Cristiano Ronaldo car collection. Only 500 units of the car were manufactured and the football star is one of its proud owners. The car gets a silver and polished carbon paint scheme with red accents. The vehicle was purchased in 2019 and has been shot several times with him when the footballer cruised the car in Lisbon, Portugal. Debuted in 2010, the Ferrari 599 GTO was described as the ‘most extreme sports car’ that the Italian automaker had ever manufactured. Although the car was based on the 599 GTB, it is more powerful and aerodynamic, which helps literally double the high-speed downforce of the GTO. Only 599 units of this vehicle were manufactured, which makes it a special car in CR7’s car collection. Cristiano Ronaldo is meticulous about creating an image of control and power, regardless of whether he is on and off the field and this Mercedes Benz S65 AMG Coupe helps him a lot in doing so. The luxury vehicle receives its power from a powerful 6.0-litre twin-turbo V12 motor. In 2008, shortly after he decided to stay with Manchester United, Cristiano Rolando invested more than $50,000 (around INR 3.7 crore) in this Rolls Royce Phantom Drophead. Until today, this luxury car remains one of the most extravagant cars in the world. The 911 Turbo S receives its power from a turbocharged motor which helps the car reach a maximum speed of 200 mph and accelerate from a standstill to 60 mph in just below 3 seconds. Ronaldo purchased this car in 2016 as a compensation for being ignored for what would have become his fifth Ballon d’Or Award. The Mercedes Benz GLE63s AMG is one of the more ‘regular’ cars of the Juventus football star. The top-spec AMG is a monster which can generate 577 HP and is priced from $110,000 (around INR 82 lakh), which is less than Cristiano Ronaldo’s salary in a week. In the image below, the car has been several-year-old, so there are some scratches on the surface. If you are a player of Real Madrid, you will get a new Audi car each year. In 2017, while still at the club, Cristiano Ronaldo chose one of the most powerful models on sale, the RS7. The car is finished in Panther Black and is a very powerful hatchback which receives its power from a dual-turbo 4.0-litre V8 motor which can generate nearly 600 HP. The latest addition to Cristiano Ronaldo car collection is a Bugatti La Voiture Noire, which is also the world’s most expensive car. He bought this car as a gift for himself after helping Juventus win the 36th Serie A championship. Manufactured only 10 units in the world, the Bugatti La Voiture Noire (Centodieci) is priced at around INR 75 crore. The vehicle can reach a maximum speed of 380 kmph and can speed up to 60 kmph from a standstill in only 2.4 seconds.

You choose the view 😉😅

Above are 15 most impressive cars in Cristiano Ronaldo car collection. Which one impresses you the most? Do not hesitate to write to us to share your feelings.