This modified Honda WR-V looks much more appealing, thanks to the new paint scheme all over its body.

Based on the Honda Jazz hatchback, the Honda WR-V compact crossover was introduced more than one year ago. Since then, it has recorded a higher sales number than its elder sibling every month. Nevertheless, there are very few modified versions of the WR-V.

Below, we are going to introduce to you a customized version of the Honda WR-V with such a creative paint job which considerably enhances the look of the vehicle. To get the custom paint scheme, this WR-V was delivered straight from the dealership to the Chennai-based paint shop of Gloss Ceramic Coating. Let’s have a look at this video to have an insight into the process in which the Honda WR-V was modified with a new paint scheme to have a much more attractive appearance.

As can be seen in the video, the modified Honda WR-V looks glamorous, thanks to a brand-new repainted body with the combination of three different colours: red, black and white with the first being the dominant one. Minor features such as the wing mirrors, alloy rims, door handles, the roof and the roof rails have received a contrasting black paint to stand out from the rest.

The motors which this modified version gets the power from remains unknown. The normal version, which is currently on sale in India borrows both of its motor options from the Honda Jazz: a refined version of the 1.2L i-VTEC engine and a 1.5L all-aluminium i-DTEC unit. While the former can generate a maximum power of 87 bhp against a peak torque of 110 Nm, the latter is good for 98.6 bhp against 200 Nm. The transmission duties on the two motors are undertaken by a 5-speed MT and 6-speed MT gearbox, respectively. The car is equipped with a front-wheel drive system and misses out on the four-wheel one and the AMT gearbox on all of the variants in its lineup. 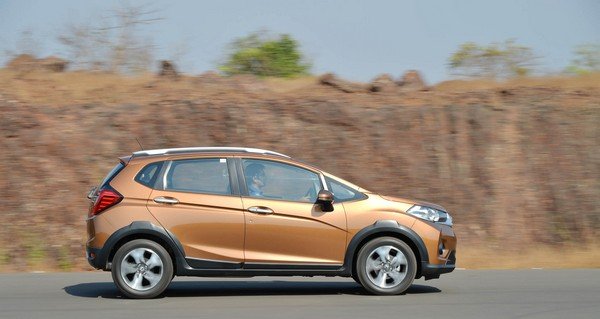 The absence of the AMT unit on the petrol variants of the WR-V is such a surprise to the car community since the Jazz comes with this feature. The reason for this may be that Honda wants to keep the price of the compact crossover at a low level. In terms of price, the Honda WR-V has a starting price of INR 7.89 lakh (ex-showroom Delhi). With this price, it is positioned above the Ford EcoSport, the Tata Nexon and the newly launched Mahindra XUV300. However, this high price tag does not reduce the popularity of this Honda compact crossover with the Indian auto buyers, thanks to its brand value, practicality, amber cabin and reliability.

Although the Honda WR-V compact crossover is based on the Honda Jazz, the engineers have made quite a few alterations to the former. Apart from the exclusion of an AMT gearbox from the transmission options, another outstanding difference between the two models is the suspension department in the Honda WR-V which helps it offer a much better riding quality and off-road capabilities than its elder sibling. Moreover, the higher ground clearance also adds to the off-road capacities of the compact crossover. With the bad road conditions in India, it is not difficult to explain why the WR-V compact crossover outsells the Jazz since its introduction to the Indian auto market.

Since the Indian car buyers have a tendency to pay much attention to their appearance with their car on the road, the modifications are likely to make the Honda WR-V even more popular than currently. Moreover, for such a price-conscious market like India, Honda is expected to keep the price of this repainted version low, maybe slightly higher than the price of the normal version.

What do you think about this modified version of the Honda WR-V, a vehicle rarely receives customizations in the Indian auto market? Share with us in the comment section below.