Recently, a video which shows how the Ford Bronco competes against the Jeep Wrangler in an off-road challenge has been released. Read on to discover.

Since the announcement that the iconic Ford Bronco will be brought back in a new iteration was made, off-road enthusiasts were eager to see what the new SUV will be like. The Bronco was well-known for its true SUV characteristics, therefore, the new one is highly anticipated by the Indian off-road fans. Launched in the North American first, the new Bronco directly competes against the Jeep Wrangler, which is also a very famous off-roader in the world. After a more-than-20-year absence in America, the Ford Bronco has made a return and still enjoys remarkable respect of the American off-road enthusiasts. In the meanwhile, the Jeep Wrangler is famous for its all-terrain prowess. People cannot help wondering between the Ford Bronco and the Jeep Wrangler, which one would deliver a better performance in off-road conditions.

Recently a video which shows the two SUVs compete against each other in terms of their off-road capabilities in Moab has been released. Before going to the details, let’s have a look at the video.

Firstly, a two-door Ford Bronco, which is equipped with a heavy-duty front bumper, 33-inch all-terrain tyres and a 10-speed automatic gearbox, climbs the rock quite simply. On the other hand, a four-door Wrangler Rubicon with running factory 33-inch tyre struggles with the challenge. According to the vlogger, longer wheelbase of the Wrangler is the major reason for its failure to overcome the climb at its first try. Finally, the Wrangler managed to complete the challenge. The last vehicle to climb the rock is a four-door Bronco with 33-inch wheels and a 7-speed MT. It successfully climbs the rock at its first try. 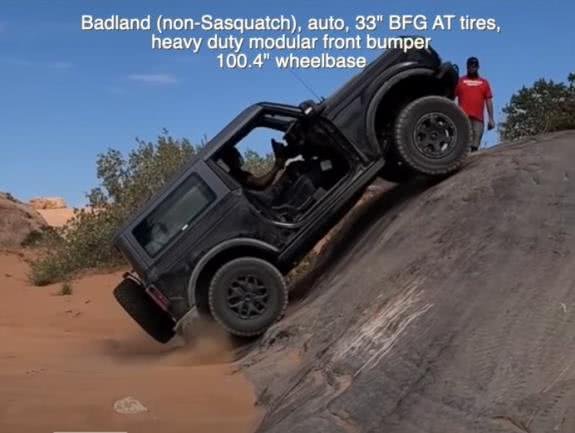 The two-door Ford Bronco manages to climb the rock at its first try.

This Jeep Wrangler Started Life as a Mahindra Bolero

*Please note that this comparison video is published by a channel dedicated to the Bronco forum; therefore, this video does not suggest the Wrangler delivers a worse off-road performance.