How Automatic Emergency Braking Operates On The Suzuki Swift

The Autonomous Emergency Braking (AEB) has been made standard on all automobiles on sale in Europe. This important safety feature will finally be introduced to India in the coming time.

AEB on the Suzuki Swift

According to the European safety regulations, all the cars sold in the old continent must be equipped with AEB, which allows the car to autonomously stop in an emergency if the driver does not brake on time. The Suzuki Swift is not an exception. Watch the video below to get an insight into how this vital safety feature works on the Suzuki Swift.

As shown in the video, when the AEB recognizes an obstacle ahead, it will gradually slow down the vehicle and stop it. In reality, not only will AEB be useful when the driver is unable to detect an obstacle and brake immediately but also when the driver cannot apply the brakes due to other reasons, falling asleep, for example.

Despite the availability of this feature, the Suzuki Swift has received a three-star rating in the Euro NCAP crash test. The reasons for this poor rating include the inadequate protection for the rear passengers and the children who sit in the car.

How does the Autonomous Emergency Braking (AEB) function?

Firstly, a radar constantly scans the road to see if there are any obstacles ahead. In case of emergency, if the driver cannot take the immediate reaction, the AEV will apply the brakes to prevent the vehicle from colliding into another moving area or an immobile object. Radar-equipped safety features like AEB or Adaptive Cruise Control (ACC) will clear the way for the development of driverless cars, which are anticipated to become a common sight on the road in the next 10 years. 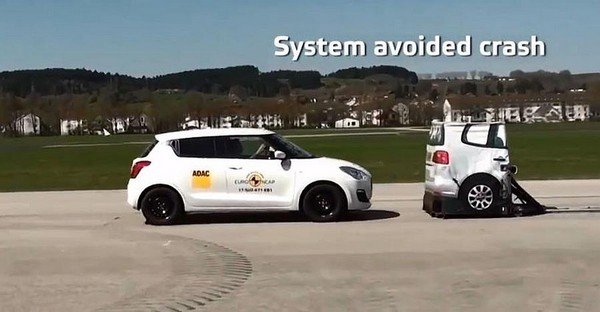 A radar will help the AEB detect obstacles ahead, helping the vehicle stop in time

The potentialities of AEB in India

In India, radar technology on which AEB and other safety technologies like ACC are based on has been limited to military use only. Therefore, these two vital safety features, which have been made standard in many other parts of the world, have not been allowed to be equipped on many luxury cars on sale in India. Volvo cars are a striking example. While all of the Swedish automaker’s cars come with AEB in Europe, none of its products in India are equipped with this feature. Considering the increasing popularity of autonomous cars, the Indian government is expected to give a green light to the use of radar-based techs on civilian cars in the foreseeable future.

Due to the strict Indian restrictions, Volvo cannot equip the AEB on any of its vehicles

Why Maruti Suzuki is the most reliable automaker in India?