24 0
Here's another video in which a designer has customized the newly launched Hyundai Venue into a badass off-roader, with the help of Photoshop. The SUV now looks more aggressive and desirable

Hyundai has recently launched its first sub-four meter SUV into the Indian market, the Venue. The SUV competes against the likes of the Maruti Suzuki Vitara Brezza, Tata Nexon, Ford Ecosport and the Mahindra XUV300. The all-new Venue comes equipped with all the bells and whistles. Moreover, it also offers some segment first features which make the Venue more anticipating. Many people who have seen the SUV in real life have said that it looks a bit small compared to the other vehicles of its segment.  A new video by Yogi Sejwal Design has converted the sub-four meter SUV into a full-fledged off-roader beast. The car now looks no less than a monster truck. 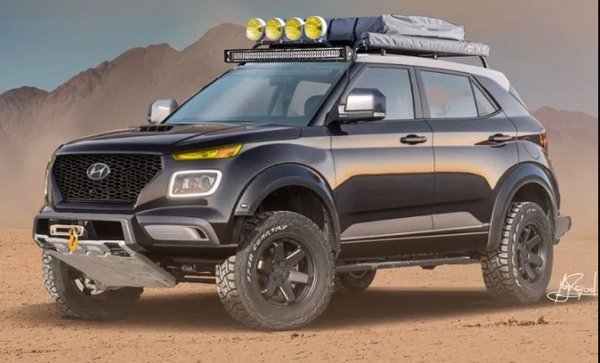 The whole SUV is painted in a shade of bright greyish-black colour while the roof has been kept white.

If we talk about the changes made on the vehicle, the side blinkers now get a yellow tint. On the other hand, the front grille has been replaced with a honeycomb mesh unit. Upfront the car now gets an offroad spec bumper along with tow hooks. The SUV also employs a large bash plate at the front while the ORVMs have been replaced with big square units. The illumination gets upgraded with the help of an LED light bar along with four auxiliary lamps have been added on top. The whole SUV is painted in a shade of glossy greyish-black colour while the roof has been kept white. The flared fenders look aggressive as they are comfortably accommodating the huge off-road spec wheels. The SUV also features custom side steps along with body cladding. The ground clearance has been upgraded, which signifies the soft-road capabilities of the car.

Mechanically, The Hyundai Venue is being offered with three different powertrains. There are two petrol engine options to choose from. The first one is a 1.2-litre, four-cylinder naturally aspirated mill which develops 83 PS of power and 115Nm of torque. It comes mated to a 5-speed manual transmission. The second petrol engine is a 1.0-litre turbocharged direct-injection engine that offers 120 PS and 172 Nm. Transmission options on offer include a 6-speed manual and a 7-speed dual-clutch automatic unit. The diesel motor on offer is a 1.4-litre turbocharged four-cylinder oil burner that produces 90 PS of power and 220 Nm of twisting force. Transmission duties will be done by a 6-speed manual transmission.