Have A Look At This Interesting Suzuki Jimny Roller Skates Advertisement

This quirky advertisement shows two Suzuki Jimnys going through rough terrains. What's special though, is that they are dressed up as roller skates.

The newest-gen Suzuki Jimny has received positive feedback from compact SUV community, thanks to its bold stance, a wide array of bright colour options, powerful engines and high off-road capabilities. The Jimny has been well-known for its efficiency in both city and off-road travelling as well as its cute and slightly quirky appearance. Quirky deserves quirky, right? Keeping this in mind, Suzuki Australia has released a very interesting advertisement on the Suzuki Jimny. Let’s take a look at this advertisement.

This video is titled “For Fun’s Sake”, which really matches the nature of the video. Considering the small footprint of the Suzuki Jimny, its off-road capabilities are really impressive. The video has been successful in showcasing these abilities of the Jimny by featuring it function as roller skates. Regular roller skates can be used only on smooth roads and are useless on uneven ones. Nevertheless, in this commercial, the Suzuki Jimny Roller Skates are able to overcome even the toughest of terrains. The roller skates in the ad even come with fog lights and reverse lights that turn on when riding backwards. The Jimny on sale in the Australia auto market is powered by a 1.5-litre four-cylinder petrol motor which is good for a maximum power/torque output of 101hp/130Nm. Transmission duties are undertaken by either a 5-speed MT or a 4-speed AT gearbox. In Japan, the Jimny is offered with a 0.66-litre turbo three-cylinder motor which can deliver 63hp against 96Nm, which is a method to gain the kei-car vehicle class compliance in the country. With regards to the Jimny’s capabilities, it is available with a part-time 4WD system with selectable low-range ratios, which will be of great use when it going over demanding trails. The Jimny also comes with hill-hold control and hill-descent control, which help ease its handling when travelling off-road. 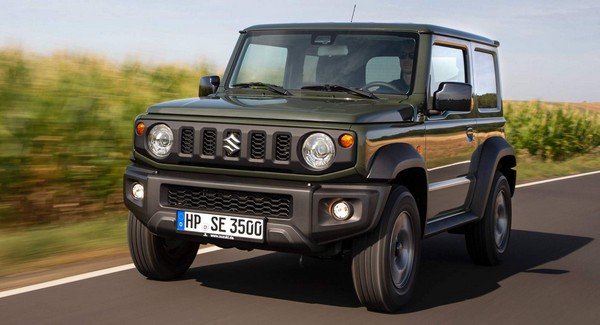 The Suzuki Jimny is in great demand all over the world.

Also Read: Suzuki Jimny Black Bison Edition Will Get You At Awe

The Suzuki Jimny has enjoyed great success across the world, and had also received the 2019 World Urban Car of the Year award. The Suzuki Jimny is also in great demands around the globe, with a long waiting list especially in New Zealand and the UK. Although the Japanese auto manufacturer has no intention of producing roller skates at the moment, who knows, after this advertisement, Suzuki will decide to manufacture roller skates based on the Jimny? Considering Japan, outrageously ridiculous products aren't off the table! The skates will probably sell as well as the car, probably.