Celebrity stunt driver Ken Block has teamed up with Ford to promote the Mustang Mach-E, but sadly, we’ll have to wait for a while to see him impulsively driving the electric SUV. A new video of him driving the Mustang Mach-E has also surfaced over the YouTube, where he's accompanied by the former stig Ben Collins, NASCAR driver Billy Johnson, and actress Molly McQueen. The car which Ken is driving is a prototype car covered with camouflage. The Mustang Mach-E was initially tracking at slow speeds but, after a while, the car picks up some speed, which surprises Ken Block and his crew members. Molly Mcqueen says that the acceleration of the car feels like a sports car and Billy Johnson says “it feels racy.” 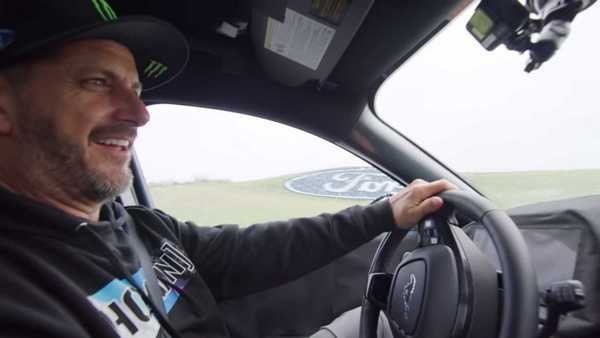 Courtesy Ford and their weird sense of humour, one can hear the engine revving in the video below at 1:52. This is the first time that Block has driven an electric car and he was thoroughly impressed by how the Mustang Mach-E handles and brakes. On the other hand, Collins commented that “it’s a car you can actually drift”, though we guys need to wait and see about that.

The blue oval took covers off from the first-ever Mustang electric SUV last month, but you won’t be able to get one before 2021.

The Mustang EV will hit Indian shores via the CBU route, so it’s obvious that the electric car will be quite expensive.
Right now, we are not sure which one of the two-battery options will propel the India-spec Mustang Mach-E. Internationally, the entry-level model employs a single motor powering the rear wheels. On the other hand, the top-of-the-line trim gets a twin-motor, four-wheel-drive variant. The Ford Mustang Mach-E will rub its shoulders with the likes of upcoming Audi e-tron and Jaguar I-Pace.