Mahindra XUV300 AMT Spotted Testing Prior To Its Launch

Recently, a test mule of the Mahindra XUV300 AMT has been spotted testing uncamouflaged near the Mahindra research facility.

Been on sale in the Indian auto market since February 2019, the Mahindra XUV300 compact SUV has attracted numerous auto buyers, which is thanks to its long list of top-notch features including some segment-leading ones in the top-spec variant and an aggressive price list. With 9000 units delivered to the Indian auto buyers’ garage in less than two months, the XUV300 has defeated the Ford EcoSport to become the third-most hot-selling model in the segment, after the Maruti Brezza and the Tata Nexon.

Also read - Mahindra XUV300 Registers 13,000 orders in the first month of its launch

Mahindra wants to further increase the popularity of its new compact SUV by adding an AMT gearbox to its transmission options on both the petrol and diesel variants. This convenience-enhancing feature will help the Maruti XUV300 increase the competitiveness against its competitors. The Mahindra XUV300 AMT will be introduced to the Indian auto market by the end of this year. Recently, a video which shows a test mule of the vehicle which is not camouflaged at all has been released on the AutoLust Network channel. Firstly, let’s have a look at the video.

As per the video, the test mule has been spotted testing without any camouflage near the Mahindra research facility. The vehicle here is believed to be a W8(O) variant. The test mule gets an “Automatic” badge on the fender instead of the rear, which makes this feature invisible to us. Furthermore, the rear wiper is absent in this test mule, which means that even the top-spec trim of the automatic version will not get this feature. All the other features are expected to be maintained from the manual version.

Underpinned on the Ssangyong Tivoli’s X100 platform, the Maindra XUV300 has been considerably shortened to have a under 4-metre length and completely restyled in terms of the exterior. The vehicle is one of the most well-equipped compact SUVs in India. Its top-spec variant is replete with a wide range of segment-leading features, some of which are even packed on a compact SUV for the first time such as the seven airbags, dual-tone temperature control and disc brakes on all the four wheels. The Mahindra XUV300 AMT is expected to maintain all the interior features of the manual version.

As regards the performance, the engine options will still be carried over from the manual version with a 1.2-litre 3-cylinder turbo petrol motor and a 1.5-litre 4-cylinder turbo diesel unit. While the former can produce a maximum power of 110 bhp and a peak torque of 200 Nm, the latter can deliver a 115 bhp against 300 Nm. The home-grown auto maker is intending to introduce a 6-speed AMT gearbox on both the petrol and diesel variants at the end of 2019 which will send the power to the front wheels of the cars. The Mahindra AMT is anticipated to be priced in a higher range by INR 60,000 than the manual version. An electric version of the Mahindra XUV300 is also on the lineup. Expected to be the first-ever reasonably-priced SUV from the domestic automaker, the XUV300 EV is likely to be priced under INR 15 lakh. It is expected to have a travel range of up to 250-300 kms per charge and can be charged to 80% in just an hour with a quick charging facility. The vehicle can accelerate from a standstill to 100 kmph in just 11 seconds with a maximum speed of 160 kmph. The XUV300 EV will maje its debut at the 2020 Indian Auto Expo before its launch later in the same year. Moreover, a 7-seater version of the XUV300 is also said to be under development; however, it has not been tested on the Indian roads. 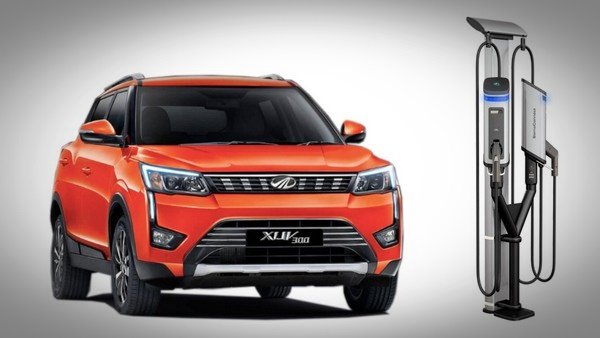 The electric version of the XUV300 is expected to be launched in 2020.