Maruti Esteem Drives Over a Bed of 4,000 Nails

Who would win- an Old Maruti Esteem, or a bed of sharp pointy metal nails? See for yourself here.

Driving over a single nail can puncture your car’s tyres. So you would expect the scenario to be much more violent if you drive over 4,000 nails, right? Well, not really! Our friendly neighbourhood physics does a little magic and prevents the rubber from sinking into the sharp pointy metal. How, you ask? Let us explain to you in detail.

The video above has been posted by a YouTube channel called ‘MR. INDIAN HACKER’. It begins with a young man driving a Maruti Esteem with a bed of nails tied to the roof. He brings the car to a remote location, away from public roads (a smart decision in our opinion). The man then places the nails on the ground, and builds a ramp for his car to drive up to it. He then dashes the car over the nails at speed, and comes out the other side unharmed. After that, he tries a second time, this time disregarding the ramp and driving straight on to the nails, but slowly this time. Again, we see that the tyres do not suffer any punctures or slashes.

In seventh grade, we were taught that pressure equals force over area. The lesser the area, the higher the pressure, and vice versa for the same amount of force. With a single nail, you’ll get a single point of contact with the tyres, which has a tiny area. In contrast, when you have thousands of nails close together, the same tyres would have multiple points of contact with the nails. Thus for the same force (weight of the car in this case), a single nail is capable of significantly more damage, while every additional nail will reduce the pressure by a factor of the total number of nails in contact. 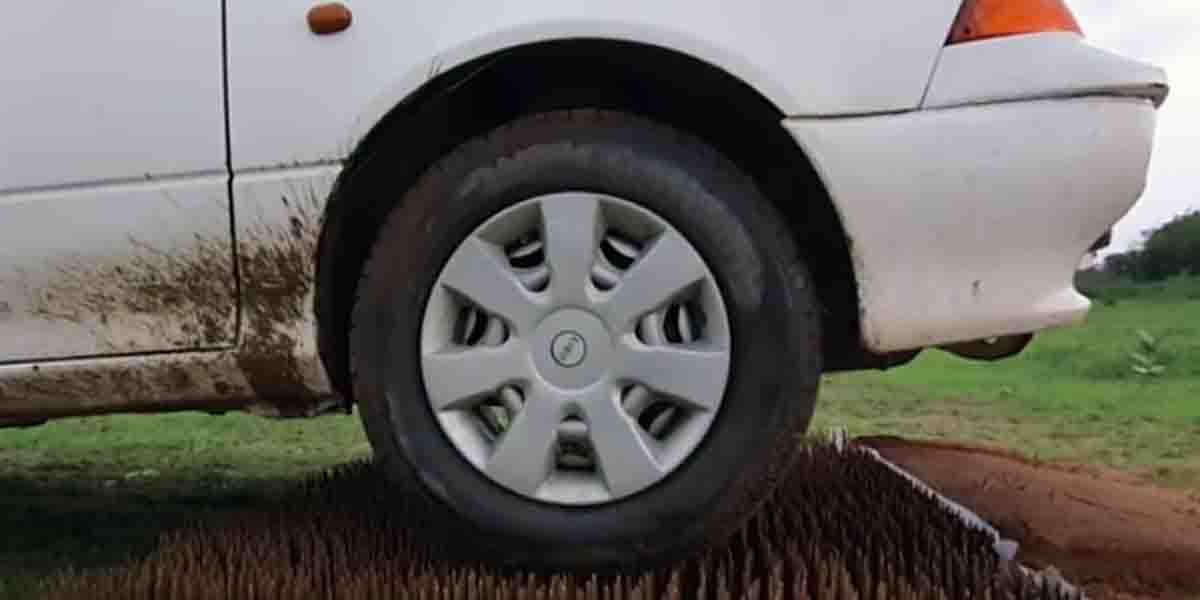 You might have seen a similar trick before, but with a human being laying on top of a bed of nails and remaining unharmed for the duration he/she stays on it. The same person wouldn’t be able to survive if a single nail (or knife) was used instead, as it would stab him/her and lead to death.