Why We Think Maruti Suzuki Jimny Could Be a BIG HIT

With an affordable price and excellent off-road ability, the Suzuki Jimny could be a worthy successor to the now-defunct Gypsy.

At the 2020 Auto Expo, we saw many incredible automobiles, some of which could potentially be revolutionary. Suzuki Jimny was one such extraordinary car, capable of bringing a whole new vibe to the Indian car market. In fact, Maruti Suzuki had showcased the Jimny at the Expo to gauge the public’s reaction towards it. With Maruti Gypsy discontinued, the current-gen Jimny would have been perfect for India. Let’s explore all the aspects of why we believe the Suzuki Jimny could be a big hit in India.

JIMNY | "Nobody But Jimny" | Suzuki

With its boxy, muscular design, the Jimny gives a great first impression. The company boosts its rugged appearance by adding a black plastic cladding which embellishes the low profile. Even the paint colours - black, grey, and moss green - are quite appealing. The black-coloured bumpers add an old-school 4x4 charm to the car to a higher level, further accentuated by the spare wheel attached to the tailgate. The new Maruti Suzuki Jimny is expected to have a ladder-frame chassis, which means drivers don’t have to worry about difficult terrains. The body-on-frame design lends stiffness to the car for better off-road performance, Off-roading is just a piece of cake with the Jimny Despite being a subcompact SUV, the Jimny still has enough cargo place for your luggage

The interior of the Jimny is extremely utilitarian, with a simple design and good plastic quality. The instrument cluster is designed to be as simple as possible in order to help drivers easily understand the information. Besides that, the seats on the Jimny are well-cushioned and offer good support, which is necessary for off-roading. If a four-door version is indeed in the making, we might have a better head- and legroom in the rear seats over the standard car! On the road, the car provides drivers with good visibility with a commanding, upright driving position. The Jimny also offers features such as multi-functional steering wheel, touchscreen infotainment, automatic climate control, etc.

Suzuki's engines and gearboxes are known for their refinement and slickness, respectively, and the Jimny is no exception. It also offers disc brakes on all four wheels with ABS as standard. The SUV has good stability, both on- and off-road, which offers drivers a comfortable driving experience. The high ground clearance on the car ensures your ride doesn't scrape its underbelly on rough trails.

The SUV is powered by a 4-cylinder 1.5-litre petrol engine which can produce a max power of 101 bhp and a max torque of 130 Nm. There are two gearbox options to choose from - a 5-speed manual and a 4-speed automatic. The car is also expected to be a 4-wheel-drive vehicle just like the international version. Because of its compact design and low transfer gearbox, the Jimny can tackle even the trickiest of off-road situations. The 5-door Indian version might affect the car’s off-road ability, but the design might be more pleasing in the eyes of Indian buyers, and the added practicality might also be a bonus. Overall, the new Jimny is a light, compact, agile, responsive, and excellent off-road machine in the subcompact SUV segment. Despite the lightweight and a cheap price, the Jimny slightly holds the same off-road capacities on Land Rovers and Mercedes-Benz G class, which cost at about 8 times more.

Land Rover Defender VS Suzuki Jimny - the off road test 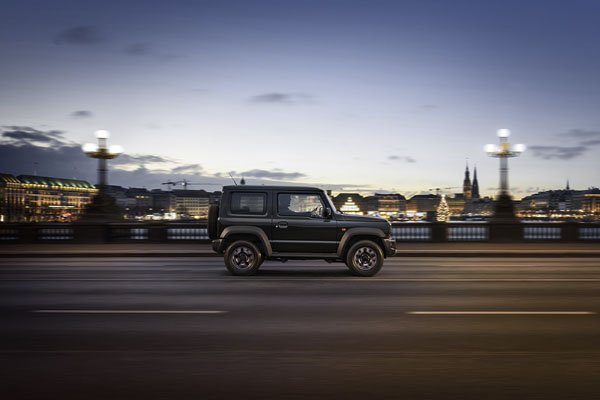 Compact SUVs are becoming more common in the Indian auto market, so launching the Jimny is a good strategy of Maruti Suzuki, especially when the Gypsy was discontinued. However, to compete with other rivals such as the Ford EcoSport and the Mahindra TUV300, the Jimny needs to have interesting features and unique traits. In terms of price, the Jimny is a formidable opponent towards the SUVs in the same segment. The car will be sold at about 9 to 11 lakhs depending on the variants.

The price is not the only advantage of the Maruti Suzuki Jimny. If launched as the new-generation Gypsy, the car would also attract a lot of people with the power of nostalgia. Not only will the Jimny be a worthy successor to the Gypsy King, but it would also create a new segment of its own in the Indian car market - an entry-level 4x4 SUV. The Jimny has already created a hype in the market even without an official launch. Who knows if it might become the next best-seller.

All in all, the Maruti Suzuki Jimny is quite an impressive car. With a compact yet muscular design, great interior, decently powerful engine, and great off-road ability, it would surely give the other competitors in the subcompact SUV segment a run for their money. That said, there are also tough rivals like the Ford Ecosport, Hyundai Venue, and of course, Maruti's very own Vitara Brezza, so we cannot ensure if the Jimny would be the champion in this race. We'll have to wait and see if the fans of the Jimny are willing to put their money where their mouths are.