Just through some subtle modifications, this modified Maruti Ignis looks much better than the original version. Check out the modified Ignis here.

Maruti Ignis is among the first hatchback cars with SUV-styled image in India. On the course of its first debut, the Ignis looks quite a bit quirky that divides the reactions from the enthusiasts into “love it or hate it” polarity. For those who seem not to resonate with the styling design of the Maruti Ignis, this mildly modified Ignis car may change your opinion easily. Being a work from a customization centre named “Speed Demonz”, this is a modified version of the Ignis facelift which was just launched in India earlier this year. It is based on the entry-level Sigma variant of the hatchback that was originally finished in a shade of Pearl White. Since it’s a base trim, the Ignis here misses out on all the modern comfort goodies but the folks at “Speed Demonz” have tried to compensate for that by playing the colour cards quite brilliantly.

This modified Ignis gets a tasteful mix of black and white colours with the black treatments for the entire roof panel, front grille and outside rearview mirrors. Some chrome detailings are made to the grille of the hatchback as well, making it a highlight at the front fascia of the model.

Other than that, the 15-inch alloy wheels and roof-mounted spoiler also receive a few black add-ons with the former comes shod with 205/55 R15 tires. The modified Ignis car features smoked headlamps with LED projector units along with LED DRLs and sequential turn indicators. In the stock form, the Sigma variant of the Ignis doesn’t offer fog lamp as standard but this modified Maruti Ignis now gets fog lamps too. 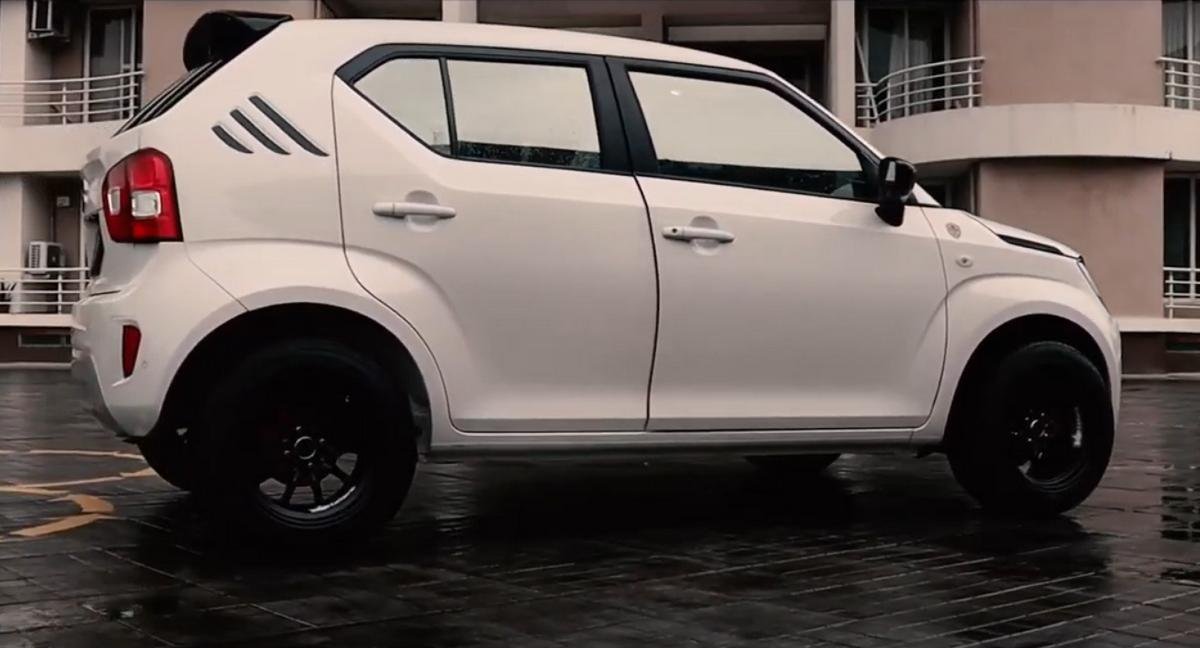 Again, it is quite a bit letdown as a basic infotainment system is given a miss on the regular Sigma variant. However, this modified Ignis gets a massive rectangular Android infotainment system. Other prominent changes on the inside of the modified Ignis car includes JBL speakers for both front and rear, custom brown-coloured artificial leather seat upholstery, remote-controlled ambient lighting, added 3D floor mats, along with the premium all-black theme for the cabin.

As for the regular Maruti Ignis, there’s no denying the fact that the carmaker has tried to make the car a more attention-seeker by adding a host of SUV-inspired styling elements. Powering the Maruti Ignis is a 1.2-litre four-cylinder petrol motor that churns out 83 PS of max power and 114 Nm of peak torque and comes mated to a 5-speed MT and a 5-speed AMT option. The Maruti Ignis is presently priced at around Rs 4.89 - 7.19 lakh (ex-showroom, Delhi) and rivals the likes of Renault Kwid, Mahindra KUV100 NXT and the upcoming Tata HBX.