Here, we have a brilliantly modified Hindustan Contessa which has been given a two-door classic muscle car look.

Hindustan Contessa is one of the best-looking classic vehicles we have in India. Based on the Vauxhall Victor VX-series (1976 to 1978), the Contessa is sometimes also called the "Muscle car of India" due to its pony-car-like looks. Sadly, the car was way too expensive back in the day, and as such, did not do very well in the market. It still enjoys a cult following though, and there are many auto enthusiasts who have one in their garage.

Some of them have even customised their cars according to their liking, thus transforming this already majestic-looking car into a piece of art. Here, we have one such example. 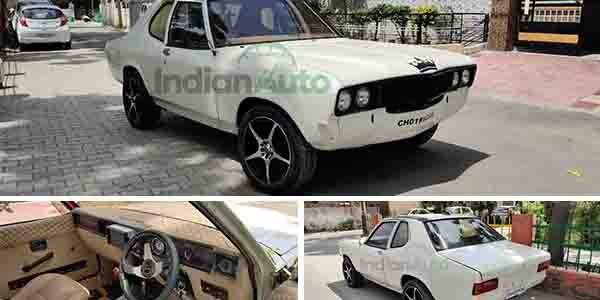 The owner of the car seen in the pictures here is Ishdeep Singh, a resident of Ludhiana, Punjab. This particular model is the 1.8-litre petrol version, and has been modified by Professional Certificate Motor in Moga, Punjab. It carries some significant modifications, both to the exterior as well as the interior. The biggest change to notice here is that this particular Contessa has only two doors and a shorter wheelbase than the standard version. The front and rear bumpers have been removed from the car, and the nose sports a custom, blacked-out grille.

The stock 13-inch wheels have been replaced by new, 17-inch, five-spoke, dual-tone alloy wheels shod with low-profile 205/50 rubber. To accommodate these larger wheels, the suspension system has also been changed. Even the paint of the car is custom, "Tata Safari pearl white" with 7-layer coating. The exhaust system has also been modified, with a giant tailpipe for loud and muscular sound. Due to the smaller passenger cabin and shorter wheelbase, the bonnet and boot now look proportionally larger, much like a real muscle car.

The interior of the car features a lot of original elements, like dashboard, seats, instrument console, etc., but there have been some new additions as well. For example, there is a touchscreen infotainment system installed in the centre console. The AC vents look unfinished, with wire mesh instead of plastic outlets. The owner, however, states that the AC system itself is quite a powerful unit. The biggest attraction in the cabin is the sports steering wheel with a faux carbon-fibre look.