Should Drivers Be Prevented From Using High Beam With This Dangerous Measure?

To stop others from using the annoying headlamps with a high beam, some drivers in Beijing are sticking scary decals to the rear car window. The Beijing authorities are paying attention to this phenomenon, realising the dangers that these decals can cause.

All vehicles today are equipped with headlamps which can be set at both low and high beam modes. Late at night, the high beam from the headlamps can be a cause of annoyance and even an accident to the oncoming cars directly exposed to it.

This problem has led to a creative but dangerous measure adopted by some drivers in Beijing to prevent others from using high beams: to stick scary decals on the rear car window. These stickers feature monsters, wolves, ghosts and characters from horror movies and even a written message which is straight to the point. The decals are slightly visible during the daytime and at night, it will be almost invisible unless it is exposed to the direct lights, like the high beams from the car headlamps. 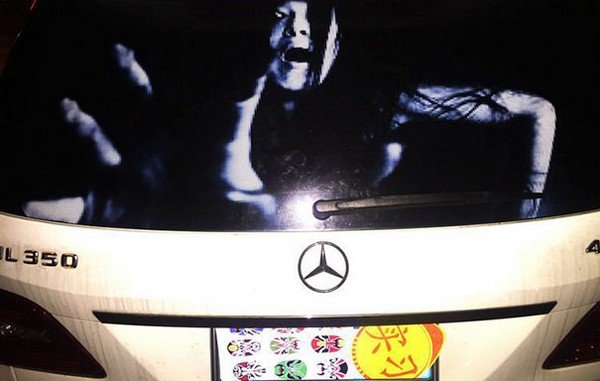 At night, the scary faces will become clearly visible if they are exposed to high beams from the behind headlights

The trend to stick these decals to the rear window of the car as a method to hamper the drivers behind from using high beams is becoming more and more popular in Bejing with numerous shops on e-commerce website Taobao selling them. However, this measure can be a double-edged sword as it can be a cause of accidents. Let’s imagine, you are driving in the night, then the scary images appear in front of you, you can easily lose control of the vehicle and cause an accident. In China, it is not illegal to stick decals to your car, but these kinds of stickers can be a safety issue and drivers could get fined for using them. Now, these stickers are widely sold on the Internet and have become a phenomenon in Beijing

To make people refrain from using this risky measure, it is necessary that all drivers should be civilized and use lower beams in their car. The higher beams should only be used as the last resort when there are no other choices.

3+6 Useless Car Hacks You Never Want To Use