The Suzuki Jimny has become an instant hit of the brand in the international market. Watch the Suzuki Jimny skillfully surfing around on the massive sand dunes with ease.

The Suzuki Jimny was launched in the international markets in late last year and the compact off-roader has quickly gained immense popularity in many countries it landed, especially in Japan and Europe. In India, the Suzuki Jimny has been one of the most-awaited car launches for the year of 2020 right after Maruti Suzuki announced its plan to introduce the Jimny in our country. Though the plan was shelved later on, sadly, it still receives a whole bunch of attention from the Indian auto enthusiast. Why does the Jimny become so popular? Watch this video showing the Suzuki Jimny brilliantly surfed through the massive sand dunes and you’ll know the reason.

Here’s a video showing a Jimny doing the dune-bashing in Dubai and it’s the Sierra version. It appears like a competition between the Jimny and a number of all-terrain vehicles (ATVs) on the sand and the Japanese car manages to tackle the challenges effortlessly. While most of the other ATVs are powered by massive V6 and V8 engines and comes with wide off-road spec tyres, the Suzuki Jimny seems to be in stock form. With full options in place, the Jimny Sierra weighs 1,135 kg only. Thanks to its lightweight body, the humble Suzuki Jimny can climb the steep incline of sand and surf through it without any problem. 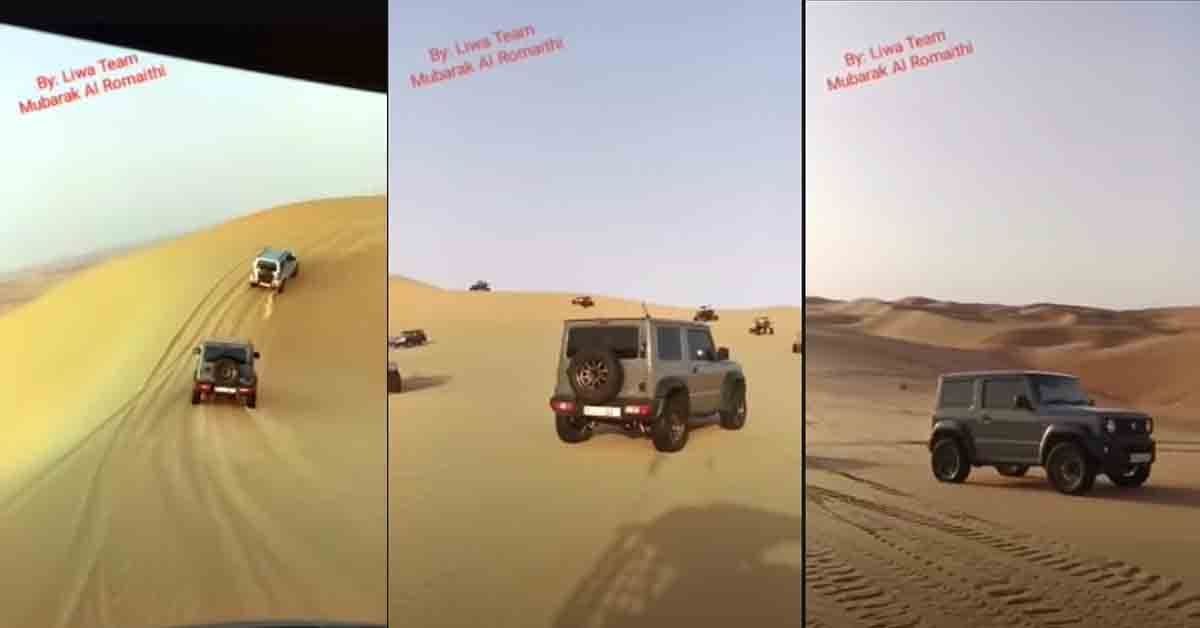 The all-new Jimny is a very capable off-roader and its excellent off-roading capabilities are attributed to its popularity in the Indian market. The purpose-built SUV draws the power from a 1.5-litre four-cylinder naturally aspirated petrol engine that can pump out 101 PS of max power and 130 Nm of peak torque. Do note this engine also powers the new Maruti Ciaz and new Ertiga in the Indian market. The Sierra can make use of a 5-speed MT or a 4-speed AT option. The 4x4 drivetrain on the Jimny with a low-ratio transfer case is extremely useful for the car to go off-roading. There’s also a regular version of the Jimny which is smaller than the Sierra version and comes powered by a 658cc 3-cylinder petrol engine option that churns out 64 BHP of power and 96 Nm of peak torque. The new Suzuki Jimny is based on the Heartect platform that also underpins many Maruti cars in India like Wagon R and Ertiga. It comes with a lot of bells and whistle for the convenience and comfort including SmartPlay infotainment system with Android Auto and Apple CarPlay connectivity, automatic climate control, keyless entry, engine start-stop and auto headlamps. In terms of safety, the Suzuki Jimny packs 6 airbags, hill hold and descent assist, tyre pressure monitoring system with electronic stability program.