This Tata Hexa turned turtle at speeds in excess of 120 kmph and then continued skidding on its roof for over 20 meters. However, all the occupants walked out of the car safely.

Tata Hexa used to be the most premium 7-seater SUV to come out of Tata’s stable. It isn’t on sale currently but is expected to make its way back to the market with an updated BS-6 engine. Just like other Tata cars, Hexa too boasts of a fairly strong chassis and bodyshell. Although it misses out on any official crash test rating, it must be kept in mind that the Aria, the crossover the Hexa is based on, secured a 4-star rating from NCAP. No wonder, then, that the car has proved its mettle in various accidents, which were reported by the respective owners. Even this time around, we have come across some visuals in which a Tata Hexa can be seen heavily damaged. The reason behind these damages is the accident involving the vehicle that took place recently.

Tata Hexa in the pictures belongs to Mr Anshu Chaurasiya, who hails from Jharkhand. He explains that the accident took place while he was on his way to Dhanbad with his friends. Also, he is thankful to the Hexa’s build quality, due to which all the occupants walked out of the car safely. The accident took place when a Maruti Swift overtook the Hexa very closely. Describing the proximity of the closeness, Mr. Anshu adds that Swift touched the Hexa’s ORVM. In a reaction to this, his reflexes steered the car to the opposite direction, which made the Hexa get on to the shoulder of the road. And, when he tried to climb back on the road, the tyres could not find enough traction.

Thus, the car oversteered aggressively and turned turtle with wheels in the air. The owner of the car adds that it was raining quite heavily, due to which the soil on the shoulder of the road became soft, therefore resulting in complete loss of traction. Also, the car skidded along the road in the same position for over 20 meters. Yes! All of it sounds scary, but thankfully all the occupants walked out of the car safe and sound. 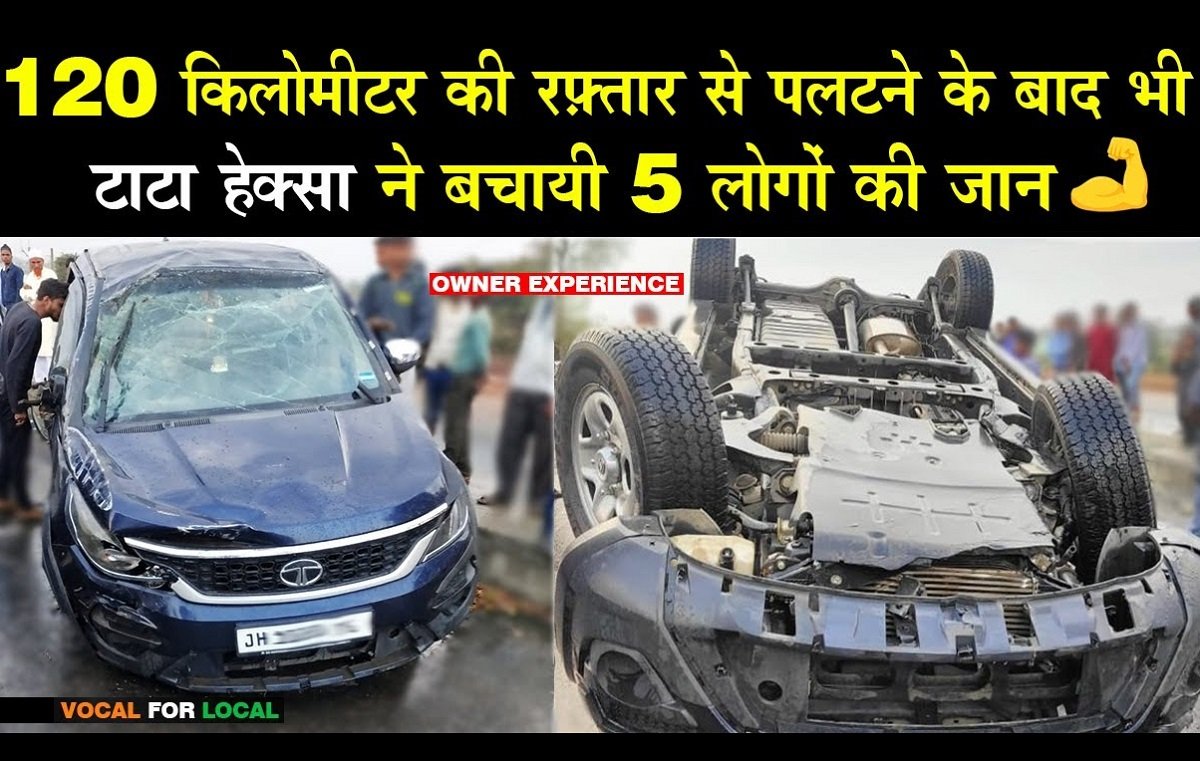 In general, Tata cars are known for their sturdy build quality and the safety they offer to their occupants, and it seems like Hexa isn’t any different. Also, to keep the occupants safe, the Hexa comes loaded with a lot of safety equipment, such as 6 airbags, ABS with EBD, ESP, hill-ascent and hill-descent control, roll-over mitigation, traction control system, and reverse parking camera with sensors.