A funny TVC focusing on the 5-point safety rating of the Tata Nexon has been released. Let’s have a look at this video.

In December 2018, the Tata Nexon became the first made-in-India car to achieve five stars in the safety tests conducted by Global NCAP. The sub-4-metre compact SUV got 16.06/17 points, the most impressive point achieved by Indian cars then. After that, other auto manufacturers in the country start to pay attention to the safety nature of their models by adding more safety features and focusing on a more steady structure.

A humorous advertisement which emphasizes the great safety nature of the Tata Nexon has been released. Before going into details, please take a quick look at this video.

In the video, a couple is talking about another woman’s attire. In the wife’s opinion, the woman looks a little bit funny in the clothes; however, the man pays a compliment to the woman’s beauty while staring at his mobile phone all the time. After that, the wife came near to the husband, giving him a questioning glare.

Then, a bold yellow text which reads ‘Accidents’ appear in the centre of the video and a message: ‘Accident.. They happen’, which indicates that accidents can happen at any time. Then the Tata Nexon appears, which hints that it can keep you safe under any circumstances. Nevertheless, whether the SUV can help the man calm his wife remains unknown. Perhaps, he can buy her a Tata Nexon as an apology. Just kidding!

As regards the Tata Nexon safety, it is equipped with a wide range of safety features, ensuring a safe journey for both the driver and the passengers. These include two front airbags, ABS with EBD, reverse camera, rear parking sensor system, front fog lights with cornering assistance, cornering stability control, various voice alerts and reminder for driver and co-driver seatbelt. Moreover, its body shell, structure and platform are also uniquely designed for strength and steadiness. All of these features, apart from the front fog lights and the reversing camera, are available as standard on all Tata Nexon variants. 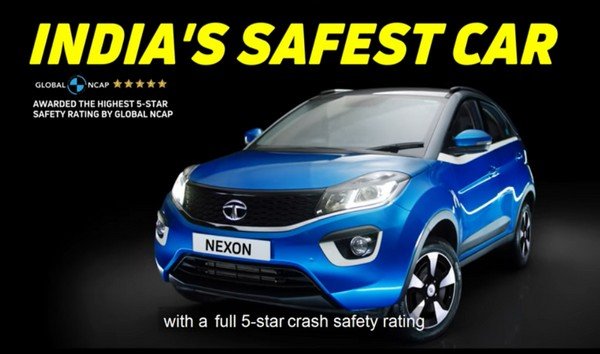 The Tata Nexon can provide both the driver and the passengers a safe journey.

With a view to improving passenger cars’ safety, several methods have been taken by the Indian government, which includes the Bharat New Vehicle Safety Assessment Program (BNVSAP), which make some safety features compulsory in all vehicles.

In terms of the Tata Nexon’s powertrain options, the SUV keeps under its hood a 1.2 litre 3-cyl turbo gasoline burner and a Revotorq 1.5-litre 4-cylinder diesel oil burner. While the former can delivers a maximum power of 108 BHP against a peak torque of 170 Nm, the latter can generate 108 BHP against 260 Nm. The transmission duties on both of the versions are undertaken by a 6-speed MT and AMT unit.

The Indian compact SUV segment is recently fiercely competitive with numerous new launches like those of the Mahindra XUV300 and the Hyundai Venue, both are equipped with some segment-leading features. As said, the compact SUV has achieved a 5-star safety rating in the Global NCAP crash tests. Moreover, the compact SUV also has great potentialities for modifications; one such example is its modified version inspired by PUGP theme. These two gave it a clear advantage over the rivals in the Indian auto market.