The Mahindra XUV500 has been one of the best-selling medium-size SUVs for quite some time now. It directly competes with the likes of Tata Harrier, the Tata Hexa and the Jeep Compass but manages to hold its own even in front of the more modern competition. The XUV500 has a bold stance and an aggressive appearance but it is not a hard-core SUV due to the absence of a full-blown 4x4 drivetrain, in spite of the availability of an optional AWD system. Recently, a hardcore off-road version of the Mahindra XUV500 has been skillfully rendered by Dharavi Team. First, let’s have a look at the video before getting into the details.

The Mahindra XUV500 has been rendered to look like a real off-roader.

The off-road version of the Mahindra XUV500 looks aggressive with some hardcore 4x4 treatment. Created by cutting and combining parts from other off-road vehicles, the final result looks stunning. Let’s now come to the details of the modifications which have been done to the Mahindra XUV500.

First and foremost, the SUV gets a bright neon paint scheme which gives it a unique appearance but may not please all car customers‘ eyes. The front grille has been finished in black, apart from the chrome bar on the top. The stock front bumper has given way to a minimized off-road unit which has been integrated with auxiliary lights and a winch.

In the side profile, the modified Mahindra XUV500 is now equipped with large off-road tyres which helps increase its ground clearance and its off-road capabilities also. Custom sidesteps have been added to help the driver and the co-passengers make an easier entrance to the SUV. Two LED bars have also been installed on the roof to offer the driver better visibility at night. More noteworthily, it now comes with a proper 4x4 drivetrain system; its suspension system has also been raised a little bit. Overall, this render should suggest some ideas of how an off-road XUV500 may look like. 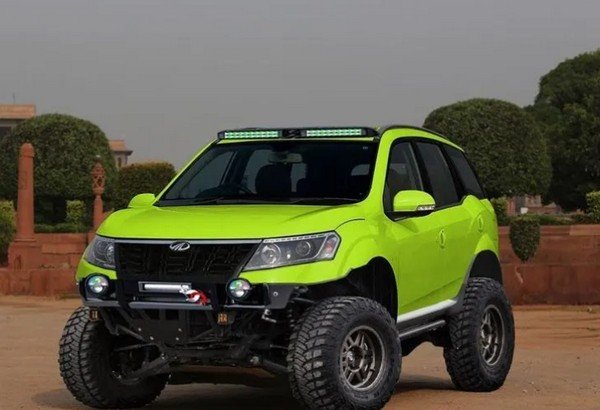 This rendered off-road Mahindra XUV500 appears to be aggressive.

The current Mahindra XUV500, like the Scorpio and the Thar, will receive a generation change in 2020. It is likely to be underpinned by an all-new platform and will keep under its hood new motor options which will comply with the upcoming BS-VI standards. A new 2.0-litre diesel motor will be one of the power sources of the new vehicle.