This Modified Maruti Suzuki Swift Looks Like A MINI Cooper

The Maruti Suzuki Swift is a good-looking car in its original form and looks even more desirable, like a MINI Cooper model, after receiving some modifications.

The third-gen Maruti Suzuki Swift was introduced to the Indian auto market last year. Based on the HEARTECT platform, it looks stylish in its original form. Back when the latest Swift was launched, it immediately reminded everyone of the iconic MINI Cooper due to similarities in the form factor. The Maruti hatchback has more than one time received the modifications to look like a MINI Cooper. Here is one such example.

The modification is done in Bhilwara, Rajasthan, and it also makes the Maruti Swift resemble the Suzuki Swift Sport, the performance version of the Swift which is on sale globally. The modifications make the vehicle outstanding from the normal Maruti Swift in India.

Firstly, it gets a dark orange cover all over the body along with a black roof and pillars. This two-tone paint scheme completely alters the appearance of the vehicle. Other exterior customizations consist of a black bumper splitter under the bumper, a big grille with a thick black bar across it and a MINI Copper moniker in the front. On the side profile, it is equipped with side skirts, aftermarket alloy rims and a new set of aftermarket tyres, which gives the vehicle a much more aggressive appearance. Coming to the rear, you can realize quite a few updates too, such as a roof-mounted spoiler and brand-new LED taillights which get a black wrap. 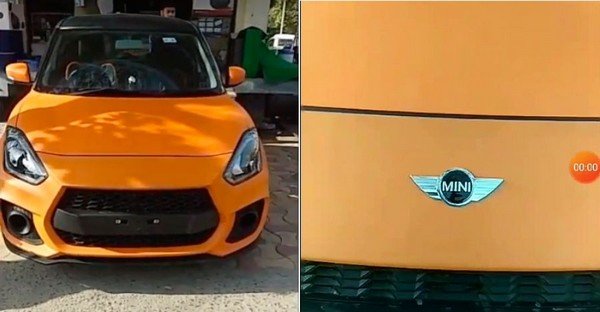 The vehicle does not only receive the customizations in the outside but also in the inside as well. An orange highlight is inserted to the dashboard. The seats come with aftermarket leather upholstery sourced from Nappa with orange highlights. All of these make the exterior and the interior of the car harmonious with each other.

The Supreme Court has banned modifications done to cars in India but it does not specify which modification has been banned. In India, changing the vehicle’s colour has been made illegal. Nevertheless, it is possible for a cover to be added to the vehicle to make it look different but keeping the original paint intact is a must. In this case, the Swift only gets an overall new orange cover, which is totally legal in India.

Be updated with interesting car stories in India by visiting our website - IndianAuto.com