0 0
A new rendering from SRK Designs depicts what the Tata Harrier could look like if made into a convertible. Hint: It is as awesome as it sounds!

While the Tata Harrier has been building up quite a fanbase in the Indian car space, the Harrier’s fans seem to have an insatiable preference for more exotic versions of the new SUV. For those very reasons, a digital artist from SRK Designs has come up with the rendering of a Tata Harrier drop-top. While it is the work of the artist's imagination, the rendering is good enough to satisfy our imagination of how the vehicle could look like.

Convertibles have not really had any real success in India so far, still very much remaining as the toys for the rich. Despite the odd renderings of regular models on the Internet or the rare sight of one actually driving down the road, convertible cars still remain a fantasy in India. However, since the popular Harrier is grabbing more attention on the road thanks to its attractive designs, the rendering on the convertible version of Harrier also catches our fancy as much as the regular model does.

In order to get the convertible look, the roof has been discarded completely while the rear doors have been removed as well. The two-door Harrier now looks sportier with the use of a new raked windshield which is surrounded by a black-out bezel. The car's wheel arches have been flared to fit the bigger black-out alloy wheels that attribute the more aggressive stance for the soft-top compared to the hard-top four-door variant. The front grille has been redesigned in all-black while the bumper and fender carry a dual-tone appearance, in contrast to the eye-catching yellow paint shade. 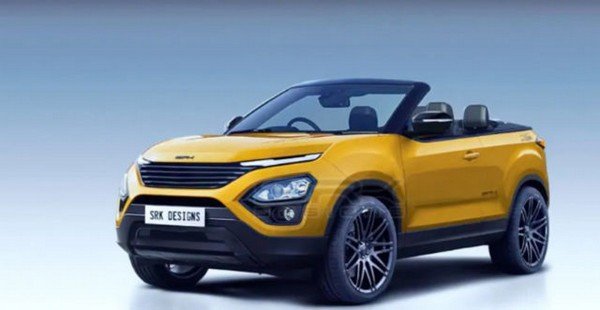 The production-spec Harrier Convertible might never be brought to production, therefore any cravings for this car makes little sense. However, customers can one way or another customize their vehicles in a similar fashion as this rendering. If anyone does decide to make this into a reality, it will be a complete one-off Tata Harrier in the market. Note that this should only be done in case you do not mind the excessively high customisation costs as well as the unfavourable weather conditions for using a convertible in our country.

Back to the regular Tata Harrier, the SUV was officially launched in India in January 2019 and is the first model to be developed on the OMEGA architecture as well as the IMPACT 2.0 design philosophy. In stock form, the Harrier does not get a sunroof but it can be installed as an after-market feature at the dealer level. The Tata Harrier currently offers a 2.0-litre MultiJet diesel engine derived from Fiat, which can also be found on the Jeep Compass as well. For the Harrier, the motor is tuned to deliver 140bhp along with the peak torque of 350Nm. A 6-speed manual transmission is standard for the Harrier SUV while a Hyundai-sourced 6-speed automatic gearbox is reportedly in the works and will come to us in the coming months. Also, the seven-seater of the Harrier christened as the Cassini is heading towards the Indian market by the year-end to keep the momentum that the five-seater Harrier has built, going strong.