This article from IndianAuto will bring you decent fuel-efficiency figures of the top 10 most fuel efficient automatic cars in the country.

Having provided a much more hassle-free drive compared to the manual counterparts, the automatic transmission has been rising in popularity in India. It could be explained by the fact that most automakers offer an optional automatic transmission for most of their car models, even for the ones in the mainstream segment. Let’s check out the list of top 10 most fuel-efficient automatic cars in the country.

It comes as no surprise that Maruti Suzuki Swift has registered the monthly sales unit at 18,556 units (calculated based on the monthly sales from August 2018 to January 2019). Being the most popular B1-segment model, its diesel model offers an ARAI-certified fuel economy of up to 28.4 km/l. This makes Swift’s way to the top first fuel-efficient automatic cars in the Indian market.

The diesel Swift receives the power from the D13A 1.3-litre engine which can generate 75 PS and 190 Nm output of torque. The automatic variant is featured by a Magneti Marelli-sourced 5-speed Automated Manual Transmission (AMT). For further information, the petrol AMT variant of the Swift has also considered a frugal car when giving out an ARAI-rated fuel efficiency of 22 km/l. Marking with an impressive average monthly sales unit at 19,730 units, Maruti Dzire AMT also offers the same fuel efficiency as the Swift with 28.4 km/l. Since the Dzire is a hatchback sibling of the Swift, it shares the similar 13A oil-burner as well as the HEARTECT platform with the Swift. The Dzire offers the petrol AMT format option with an ARAI-tested 22 km/l. Having received a great response from the customers, the Maruti Celerio AMT registered a monthly sales average at 8,602 units. As for the engine, the Celerio shares the same 1.0-litre three-cylinder engine with the Alto K10 and the Wagon R. Undoubtedly, it also offers high fuel efficiency in both manual and automatic transmission model. Notably, the ATM í mated to a 5-speed AMT which gives out an ARAI-certified fuel efficiency of 23.10 km/l. Being a flagship from Renault, the Kwid has successfully rolled out 5,511 units monthly calculated from August 2018 and January 2019. As a result, the Renault Kwid has managed itself to be in the top 2 of the most popular entry-level hatchback in the country. Being the fierce rival of the Maruti Alto, the Kwid offers two engine options including 1.0-litre and an underpowered 0.8-litre engine. In which, the former is available in both manual and automatic transmission. The AMT variant can churn out a fuel efficiency of 22.5 kmpl, which helps it land on the fourth position in the list of most fuel-efficient cars in the Indian market. Maruti Suzuki has not disappointed the followers when getting the fifth model in the production line-up to be in the list of top best fuel efficient cars in India. The Maruti WagonR has recently launched in the country and caught a bunch of concerns and interests of not only media but also the customers.

The tall boy for Maruti is available in two petrol engine variants which are 1.0-litre and 1.2-litre engine units. All that mentioned is pitted to an optional 5-speed AMT with an impressive efficiency figure. Thanks to the ARAI tests, the small hatchback proves to be frugal when returning up to 22.5 km/l for the more powerful engine and 21.5 km/l for the underpowered one. Having considered one of the most successful small models from the domestic automaker, Tata Motors, the Tiago has marked 7,792 average monthly sales units.

The Tiago is available with both petrol and diesel engine options. However, the transmission option which mated to 5-speed one is only equipped on the 1.2-litre petrol engine. It delivers an ARAI-rated fuel efficiency of 23.8 km/l. The Ameo from Volkswagon is among the most affordable sedans in the Indian market with 772 units rolled out monthly.

The Ameo offers both petrol and diesel variants. Particularly, the latter features a 1.5-litre TDI mill which can generate a peak torque of 250 Nm and a maximum power of 108.62 bhp. Remarkably, the Ameo is one of the two models in the list not to feature an AMT but a sophisticated 7-speed dual-clutch transmission. The DSG-equipped Ameo D delivers an ARAI-tested fuel efficiency of 22 km/l.

However, it is a pity that the Ameo could be on the way out of the market by 2020 as per report. 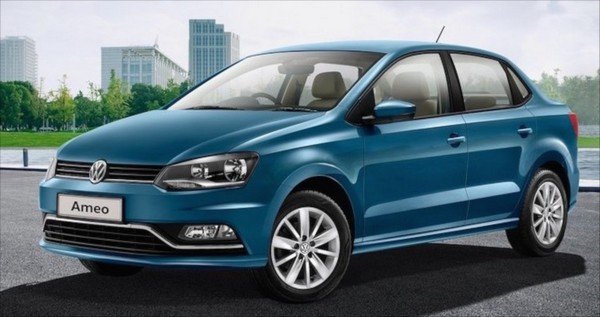 Being in the slow-selling C2-segment with an average monthly sales at 914 units, the Rapid from Skoda also managed itself to be in the list. As aforementioned, not only the Volkswagon Ameo features the sophisticated transmission but also the Rapid as well. The car model is equipped with a 1.5-litre TDI motor DSG engine mated to 7-speed DSG transmission. The car offers an ARAI-certified fuel efficiency of 21.66 km/l. Having been a Maruti Dzire and Honda Amaze-adversary, the Tata Zest has nailed an average monthly sale of just 980 units.

The diesel option of the Zest is equipped with the 1.3-litre RevoTorq motor. This engine is mated to an optional AMT. The car model offers an ARAI-tested fuel efficiency of 21.58 km/l, which helps it land on the final spot in the list of the most fuel-efficient automatic cars in India.