9 0
As the Australian Grand Prix – the opening round of the season – just ended and the Bahrain Grand Prix is coming near, we have compiled a list of some of the most iconic F1 racing cars of all time.

Another year, another Formula One season. Formula One is a mega event that is held around the world to celebrate the newest and the best innovations in automobile world as well as to honour the maximum of human's physical potentials in each racing team. However, some cars are designed better than others, and these would enter the Hall of Fame as the legendary or the game-changer of Formula One.

Statistically, the Maserati 250F was not particularly impressive, with only eight Grand Prix wins from 1954 to 1959. But the scarcity of records does not tarnish its reputation as the poster child of Grand Prix lore. Simple and graceful in form with a finely balanced cigar tube chassis, shapely tail, low snout, almost always rosso corso, it was a pure Italian race car. Not only aesthetically pleasing, but the 250F was also a pleasure to drive. Sir Stirling Moss once said it was the best front-engined F1 car he ever drove. Juan Manuel Fangio also won the Driver’s title once in Buenos Aires in 1954, once in Germany in 1957 where he broke the lap record at the Nurburgring with his 250F. Maserati 250F was not a pretty one, but there was one heck of a beast hidden inside the ugly cover

While the F1 grid at the time was filled with tubular steel frame chassis, Lotus designer Colin Chapman introduced the Lotus 25, the first racing car with a monocoque chassis in 1962. Its artistic simplicity and immense success in the hands of the legendary Jim Clark revolutionised the design for F1 racing car and eventually became the standard to every racing formula. Chapman understood that it was of the utmost importance to decrease the frontal area to enhance the speed, and the car was made with a very slim cigar-shaped body so that the driver would be almost flat on his back. With the Lotus 25, Clark won seven out of ten races and his first World Championship in 1963, an unequalled record until 1984. 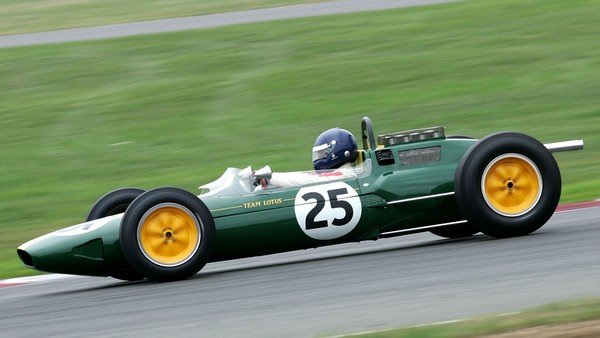 Lotus 25 was the car that changed Formula One for good

Closely based on the inspiring Lotus 72 with the same chiselled nose, side-mounted radiators and the wedge shape that optimised the car's aerodynamics, the McLaren M23 also featured a six-speed gearbox and a weight saving program after improvements and modifications. The car was first introduced in the 1973 season, but it was ex-Lotus racer Emerson Fittipaldi, who joined McLaren in 1974, that helped develop the M23 and used it to give his new team its first world championships that same year, beating Lotus itself. The 1976 season saw McLaren newcomer James Hunt win against Ferrari’s Niki Lauda by a mere one point and claim the title with the M23, the epic season-long battle portrayed in the 2013 movie Rush. Well-done preparation and continual development helped it win 16 Grands Prix, two drivers' and one constructors' world championships. Also known as the Ferrari F1-89, the 640 was the first Ferrari designed by John Barnard. It competed in the 1989 season driven by Nigel Mansell. The first F1 car with paddle shift located behind the steering wheel, it had a sharp, slim nose, a narrow monocoque chassis and bulging sidepods designed to house the radiators with maximum aerodynamic efficiency. The 640 was also the first to contain a semi-automatic gearbox in F1, which was unreliable before the power supply problem was fixed. Barnard's innovation changed the transmission design for F1 race cars forever when semi-automatic gearboxes became the norm by the mid-90s. The Ferrari 640 proved to be fast: it brought Mansell and Ferrari a remarkable victory on its debut in Brazil. The latest, biggest change in F1 regulations was none other than the utilisation of hybrid power units in 2014, and Mercedes answered with the W05 (also called Mercedes F1 W05 Hybrid). The car first appeared at the Australian Grand Prix and won it with Nico Rosberg, then went on to conquer the Malaysian Grand Prix, Bahrain Grand Prix, Chinese Grand Prix and Spanish Grand Prix with Lewis Hamilton. With the W05, Mercedes split the compressor from the turbo, packaging the former at the front of the engine and the latter at the rear. This proved to be useful to the aerodynamic efficiency and battery usage, allowing the car to run at the same pace as before while using 35 per cent less fuel. The W05 ended the 2014 season successfully with the drivers' championship for Hamilton and the constructors' championship for the team.