Have you ever wondered what fictional vehicles look like in reality? Some enthusiastic fans of them have built their real-life versions. Check out this article to see top coolest ones!

Do you believe that everything is possible? Back in the time when Einstein’s Relativity Theory was merely theoretical and people would not believe what he said is true. Or just as when Galileo was humiliated when he insisted that the Earth orbits around the Sun. Not only do the two examples show us everything is possible, but there are also others like when our imagination comes true. The only prerequisite for them to happen is our attempt to bring them into reality or prove their existence. That is also 100% true in the wonderful world of fiction, where imaginative or fictional figures and elements intrigue people to seek for escapism, in other words, doing the impossible. Some automobile manufacturer or car fans have been inspired so much by fictional vehicles that they decided to create real-life versions of them. For instance, in this article, you are going to speculate the most prominent ones, which include Halo’s Warthog, Star wars’ X-34 Landspeeder, Scooby-doo’s Mystery Machine, Tron: Legacy’s Light Cycle, and The Flintstones' Car.

Any fan of the game knows that the Warthog or Hog belongs to human beings UNSC (UNITED NATIONS SPACE COMMAND). The fictional vehicle is responsible for ground transportation and their variants are depending on the weapons they are mounted. Although there are a couple of Hogs are intended exclusively for transportation, most of the rest carry versatile anti-armour or anti-aircraft, which help optimize their deft mobility and light armour. And here are other specs of the Warthog: This is how a real-life version of Halo’s Warthog look.

Therefore, it is no doubt that many of Halo’s fans dream of having a real cool off-road Warthog. And among the fans, Peter Cooper decided to make a fan-film titled Operation Chastity in which a 1983 Land Rover Defender was chosen to be converted into a real-life Warthog. Unfortunately, his project had to be cancelled for numerous reasons, and the non-fictional Warthog had no role anymore. In the end, Cooper sold it.

The blockbuster films have been amazing viewers with spectacular and epic space battles which involve impressive weapons, automobiles and aircrafts. One of the most featured protagonists in the movies, Luke Skywalker, owned an old but cool hovering vehicle named X-34 10Landspeeder before selling it to pay for passage to Alderaan. Just as the rest of its kind, the Landspeeder is a futuristic personal vehicle with advanced technologies. That is to say, it does not move on the ground by wheel, but hovers thanks to the turbine engines. Old but gold is what some people say about the Landspeeder.

The epic and innovative idea of the Landspeeder’s design has evoked the creativity of many people including Tommy Built Design Studios, who made an attempt to create a real version of this fictional vehicle. They did very well with the body; however, despite their hard work, they could find a way to make the real version hover. Maybe, in the present time or a few years more, technologies and involve greatly to help create real flying cars.

Scooby-doo’s series never gets old in the hearts of many people. And the real fans will always remember the iconic van having painted ‘The Mystery Machine’ on both sides. Indeed, that is the Van takes the Mystery Inc. on their thrilling adventures all over the world! The fictional vehicle is kinda easy to build, which is unlike the previous two outstanding cars. If you want to make one, just simply find a van, some paints and tools, then decorate it. However, painting is not always a piece of cake, there are many people who did it wrong, which led to awful drawings instead of a colourful Mystery Machine. Does this picture remind you of your childhood?

Nevertheless, there was a person in love with building fictional cars. His name was Jerry Patrick and this man spent 30 days just to convert a 1968 Chevy van into his very own version of the Mystery Machine. The reason why Patrick’s Mystery Machine version stood out is that the details of his van were almost 100% the same as the fictional version. In other words, It had a beautiful paint job, vanity plates that read "OSCOOBY", a themed interior, and wonderful upholstery.

Tron: Legacy succeeded in creating one of the most thrilling and innovative sci-fi worlds. And anybody watching the 2010 blockbuster will be excited to an extent when a bunch of Light Cycles racing. Furthermore, the bike is just a fictional vehicle in a virtual environment in the film, which explains why it can ignore all the normal physics. 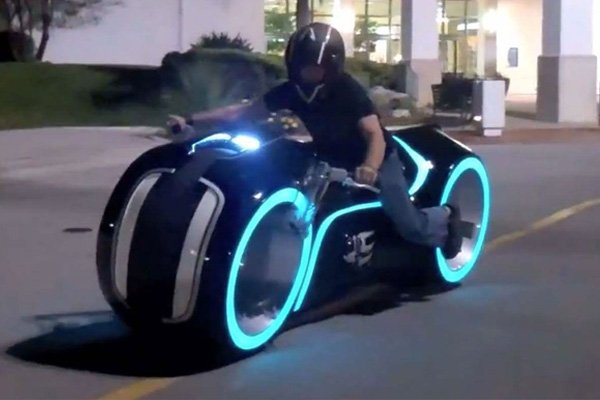 Isn't it cool to ride the Light Cycle at night?

Despite the illogical way the bike functions or the unreasonable and uncomfortable postures of the rider, Parker Brothers Choppers decided to build a real version of the Light Cycle. The total cost of this real-life version is estimated up to $55,000. But the extremely large tyres are too disturbing to ride easily on the road.

Fred's footmobile was a prehistoric vehicle having stone rollers, an animal skin covering, and a wooden frame. Despite being lack of engines, air conditioning system, and a floor, the Flintstones must have a very creative mind to create such man-power consuming automobile (that is because they fuel it with their amazing legs). Sebastian Trager built his own version of the Flinstones' car.

The first impressive replica belonged to Sebastian Trager. Being inspired by childhood nostalgia, the German man incorporated a 1.3-litre engine in his real-life version of the fictional vehicle. However, because the windshield, lights, wipers, and indicators are lacking in the Trager version, it became illegal on the street. Sultan Ibrahim Sultan Iskandar also has another replica of the fictional vehicle.

The second amazing one belongs to of Johor, one among the wealthiest and most powerful Malaysian state rulers. Last year (Jan 2019), the sultan posted on his FB page ‘Yabba, dabba, doo’ after receiving a replica of the Flintstones’ car from a fellow royal. According to the owner, this car was so awesome because he didn’t need to use his legs to power the vehicle, instead, the car had a motor.

And that’s all for top 5 amazing real-life versions of fictional vehicles. If this ain’t interesting enough for your boring day, more tips and stories are awaiting you on our website IndianAuto.