Toyota Innova Crysta Transformed Into A Luxury Condo on Wheels

This Toyota Innova Crysta looks like an absolute stunner with an array of modification kits that have been done to take its luxury and comfort factor to a higher level.

As you may know, the Toyota Innova Crysta has been quite a true success story for the Japanese auto major in India. Considering a big and comfortable MPV for daily use, the Toyota Innova Crysta comes out of top as the main topic of conversation among enthusiastic customers. The Japanese MPV has been selling in extremely good numbers in every market it is sold in including India and even outsells rivals like Tata Hexa, Mahindra XUV500 and others by a considerable margin.

To achieve that success, Toyota has gone extra miles to make the Innova Crysta an ideal MPV among the middle class with the introduction of a solid build quality, powerful yet frugal engine as well as a ton of creature-comforts. The MPV has also become a crowd-favourite in the customisation world among car fanatics. In a bid to optimize the car’s overall look and comfort, a custom car studio named Executive Modcar Trendz has brought out an  exclusively customised Toyota Innova Crysta with a heavily overhauled cabin that makes it look like a plush, mobile meeting room. The pictures here show that this modified Toyota Innova Crysta is absolutely the epitome of high quality craftsmanship. The interior has been meticulously done up in a way that will, without any doubts, leave an impress from the very word go. For the connoisseurs, the Innova Crysta’s cabin will ook distinctive compared to various lounge style-based customized cabins. While the other lounge-style interior mods seem too expensive and classy for corporate use, this revamped Toyota Innova Crysta turns out to be more simple and useable, especially for the business-on-the-go types. 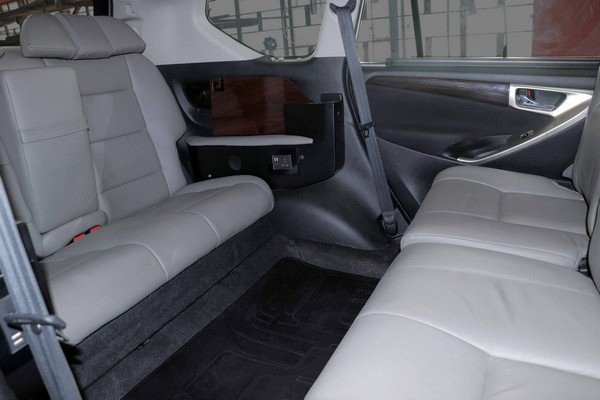 When you step inside, what pleases the onlookers’ eyes most is the pearl white upholstery, which brightens up the overall cabin tenfold. The white leather seats get a semi-reclining feature combined with wooden foldout tables to further redefine the premiumess of this MPV's interior. Moreover, it has been redesigned with two rows of lounge-style seats which face each other, perfectly fitting our needs and aspirations for important discussions on the move.

One of the main reasons for the popularity of the Toyota Innova Crysta is based on all the comfort that the MPV has on offer. Therefore, this special meeting room-styled interior mods are definitely a welcoming sight. That said, the unique prime creation here should stand on top of your must-have wish list if you are have a keen interest in big, comfortable business-minded.machines.