WWE has turned quite a few wrestlers into global stars who regularly use luxury vehicles in their everyday drives. Read on to discover.

WWE, which stands for World Wrestling Entertainment, has been one of the most popular entertainment sports company for quite some time now. It has helped many wrestlers become international celebrities who are not only well-known for their strength but also for their car collection which consists of some luxury cars used for their everyday trips. Earlier, we have helped you gain an insight into some celebrity car collections, today, we would like to provide you with a list of some of the most outstanding WWE stars cars.

One of the greatest wrestlers in WWE history, Triple H regular uses the Cadillac Escalade for his daily travel. The vehicle has an elegant but somewhat intimidating appearance. The vehicle receives its power from a 6.2-litre V8 motor, which can generate 420 BHP against 624 Nm. Triple H's Cadillac Escalade has an elegant but intimidating appearance.

Triple H also owns a Rolls Royce Phantom which has a black paint scheme, which he also uses on a regular basis. The premium sedan gets its power from a large 6.75-litre V12 motor which can deliver 453 BHP against 720 Nm. Being one of the actors who receive the highest salary in the world, Dwayne ‘The Rock’ Johnson is the owner of some supercars. The one seen below is the Ford F150 pick-up truck which has been modified with a custom lift and an all-black paint scheme to suit his preferences. His garage also includes another Ford F150, which is named “Black Gorilla”. Powering both of the two trucks are a 5.0-litre V8 motor which can deliver a maximum power of 570 BHP. A Cadillac Escalade also makes his garage become more diverse. 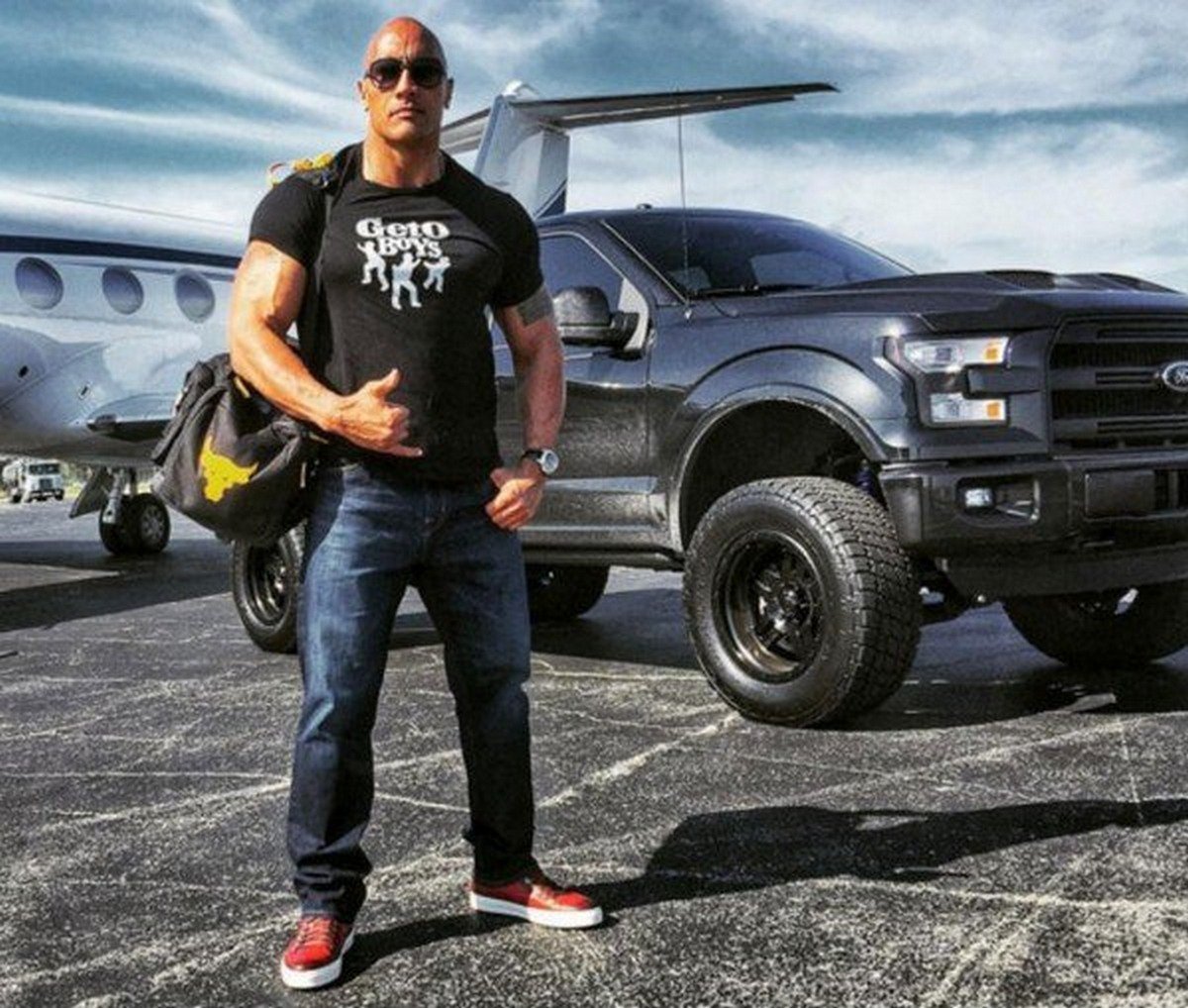 The Rock's Ford F150 has been customized according to his preferences.

Besides the SUVs and the pick-up trucks, the Rock also possesses a black Rolls Royce Wraith, in which he has been spotted quite a few times. Being a 2-door coupe which is based on the Rolls Royce Ghost, the vehicle receives its power from a 6.5-litre Stone Cold win turbocharged V12 motor which is good for 623 BHP. The Rock has also been spied in his Rolls Royce Wraith many times.

Camaro has a passion for classic American muscle cars, among which the red Chevrolet Camaro is one of the most familiar ones. Being a COPO Camaro, this vehicle is a 1969 model and has a muscular appearance. Thanks to the 427 big block motor which serves as its power source, it is even more special. Other outstanding classic automobiles in his collection consist of Oldsmobile Cutlass Rallye 350, Dodge Charger and Plymouth Superbird. Apart from classic automobiles, John Cena garage does contain a few modern cars. The most notable one is the Rolls Royce Phantom which is regularly used by the wrestler on a regular basis. Being a 2006 model, the vehicle is powered by a 6.75-litre V12 motor which can deliver 453 BHP against 720 NM. Despite its muscular appearance, it has a quite fast acceleration speed which helps it speed up from a standstill to 100 kmph in only 5.9 seconds. Other modern automobiles in his garage consist a Land Rover Range Rover Autobiography and a Bentley Continental GT Supersports.

Another WWE star who should be included in this list is Stone Cold aka Steve Austin. He has a McLaren 720S, the most exorbitant car in his garage. Being a phenomenal sports car, the 720S is also a competent track tool which is often called the ‘Hypercar slayer’. The 720S receives its power from a 4.0-litre V8 twin turbocharged motor which is good for 710 BHP against 770 Nm. This supercar can accelerate from a standstill to 100 kmph in only 2.8 seconds. It is also available in the open top version. The McLaren 720 S is a phenomenal sports car with an impressive acceleration speed.

Besides this car, his car collection also includes many vintage vehicles and a 1995 Ford Bronco. Having said that, his favourite vehicle is the grey Range Rover Autobiography, which can be seen in the image below. Besides, he also owns a wide range of other SUVs, most of which are appropriate for his posture. Being well-known for not only his special fighting style but also his colourful clothes, Hulk Hogan also has an impressive car collection which mostly consists of American Muscle automobiles with models produced in different eras. One of the latest additions to his garage is the Dodge Challenger Demon, from which he has removed the speed limiter to increase its maximum speed from 160 mph to 203 mph (326 kmph). Hulk Hogan has increased the speed of his Dodge Challenger Demon by removing its speed limiter.

Another muscle car which is also often driven by Hulk Hogan is the Chevrolet Camaro. He owns a number of Camaros from different eras. The famous wrestler has been spied driving his muscle cars multiple times. Hulk Hogan uses the Chevrolet Camaro as his daily vehicle.

Above is the list of some WWE stars and some of their favourite automobiles. Which one impresses you the most? Please share with us in the comment section below.