What Are The Greatest Auto Innovations Of 2018?

6 0
At the year-end period, let’s take a look at how far the car industry has gone by looking back the greatest innovation in the automobile industry.

Industry 4.0 has taken us by storms. In no time, we will see autonomous and all-electric cars driving around. The auto industry is developing and moving up toward a totally different auto world that we are recently living in. Each year, there are more and more techs to be innovated and applied in new cars models. IndiaAuto will review the best innovation of 2018 on the following reading.

The last year has seen the rise of electric vehicles. And Jaguar I-Pace is among the best one introduced. The electric motor with 394bhp and 694Nm on tap is able to launch the car from idle to 60mph in just 4.5 seconds.

More than just a sleek EVs, the I-Pace is the solid proof of incredible off-road ability. The AWD system could pull the car through the toughest terrain, rocks, flood, or slopes, you name it. It could even emerge in the 19.7-inch deep flood, which is equal to the size of an average wheel, with no sweat.

Moreover, the I-Pace also offers an outstanding high-speed charging that allows the car to take on 80 per cent energy in 40 minutes, among the fastest charging speed we have ever seen. Here comes another incredible electric car. If the I-Pace stuns us with its unparalleled off-road capacity, the C_Two has our jaw dropped with its incredible speed. In fact, the car is acknowledged as the fastest EVs. The car could develop 1,914bhp and 2304Nm, desirable numbers even for a fuel-powered car, let alone for an EV. It only takes 1.9 seconds to rocket to 60mph.  And this hypercar also costs a fortune to own. The car is priced at 2 billion dollars. After Alexa – the home assistant, Echo Auto is the latest smart speaker made by Amazon which will go with you on the road. Costing you just about $50, the speaker is smart enough to hear your voice above other the surrounding noises, and take your commands to do any given task. Even though it is not a thousand-dollar tech, the Amazon has clearly taken a major huge leap in the auto market for introducing a smart device at an affordable price. It is more likely to impact our daily habit than other fancy technology. 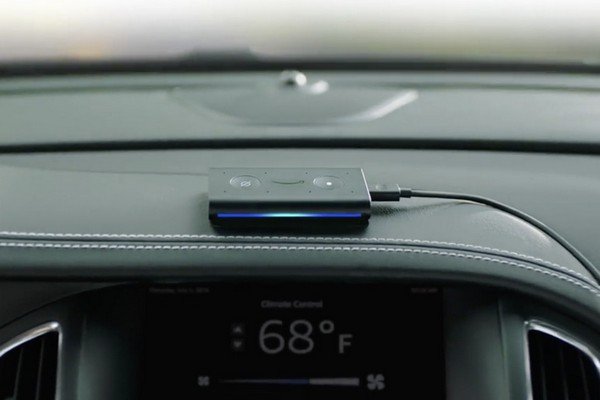 Echo Auto is the driving-assisting version of the Alexa

Electrify America, Volkswagen’s subsidiary, is taking off their plan of revolutionizing America’s electric charging infrastructure with its latest charging cable. This cable is able to charge 300 miles of range within 15 minutes. What’s more, with the cooling mechanism, the device could do it without gathering heat. It is in their plan to introduce a huge number of chairing stations throughout the country. It is hoped that it will soon arrive our shore as our government also aim at constructing a wide-spread network of charging station to foster the electrifying process in our country. Electrify America has introduced the fastest charging technology this year

It would be a big miss not to mention the E-Tron Virtual Mirror provided by Audi on this list. Instead of the traditional side wing mirrors where you can get a glimpse of the back, Audi offers an advanced tech that allowing you to get the virtual images of the back on the interior touchscreens. The screen delivers the images from the two exterior wing cameras. The touchscreen allows you to zoom in and out of the view. The adjustable lighting allows you to get adapt even when it is dark outside.

Autonomous driving is the new king of the automobile industry. Every car manufacturer is trying to develop a more potent and refined autonomous driving technology. Among the most noticeable attempt of the year is the Cadillac’s Super Cruise. The Super Cruise is a semi-autonomous car and it must be one of the best that we have ever had.

The tech is employed in 2018 CT6 and afterwards. With the Super Cruise, for the first time, the driver could enjoy an extended time of driving without touching the wheel. With all the camera and sensors, the system could keep a clear track of the surrounding. It even outsmarts other technology in the way that it could detect if your eyes are on the road or not with its internal lens. And it will remind you to channel your attention back to the road if needed.

Self-driving Vehicles: A Dream or A Nightmare