Tata Sierra, Suzuki Grand Vitara XL7 and Chevrolet Forester are some of the great SUVs that totally flopped in India owing to some reason or other

The SUV segment in pretty much every country in the world is booming. And that’s especially true here, in India. According to the Society of Indian Automobile Manufacturers, sales of SUVS have doubled in the less than a decade. Sales growth of SUVs in 2018 outranked every other type of passenger automobiles, which includes motorcycles, and scooters too. In fact, the sales of SUVs were so good, sales growth was seven times than that of regular passenger vehicles.  So, naturally, with every automobile manufacturer wanting a slice of that pie, there comes a long list of hits and misses. We’ve come up with our own list of SUV favourites which could be deemed futuristic for its time but, as you’d find out why, failed to make an impression in our country. The car that was known and loved around the world as the Subaru Forester, came to us with the golden bow at the front and back. It was in fact, GM India’s first steps into our market and the first car in India to be marketed as a Chevrolet. It even laid the foundations for the premium SUV market in India. It had all the makings of a great luxury utilitarian car, for a country with as many utilitarian needs and riches as we have. It had a modern, smart-looking cabin design, leather upholstery, a peach of a 2.0-litre boxer engine making over 120bhp, self-levelling suspension and a fantastic all-wheel drive system with rally pedigree. The Chevrolet crossover had a lot to offer but with a price tag north of INR 15 lakh, it just didn’t sit well with the general population. It is a prime example to show that buyers of the time just weren’t ready for a car with a foreign badge worth as much as a house in some parts of the country. The Invader is another classic example of an SUV that came before its time. It was built on the commercially-popular Bolero platform, and styled using practically the same lifestyle-vehicle philosophies that the Thar is built on today.  It was meant to take you to the beaches of Goa, the sand dunes of Rajasthan or pack in a dozen friends, ready for transport to the movie theatre. It was built to steal the thunder from the Maruti-Suzuki Gypsy, the vehicle of choice at the time for the adventure loving urban youth. It came with a 2.5-litre diesel making 63bhp and 177Nm of torque. While it had a clear power advantage over the Gypsy, it failed to lure in customers willing to trade in their gasoline powered vehicles for a diesel built for recreational use. In its entire production lifespan of 9 years, it just couldn’t make a mark or create a place for itself in our market They say that monopoly is the enemy of innovation. And in the early 2000’s, Maruti-Suzuki was very much at the top of the automotive food chain. Clinking the champagne glasses of success and its demand far exceeding the actual supply, the company had enjoyed being the king of the Indian automotive segment for far too long. So, failing to immediately notice the change in customer’s taste and threats from a barrage of new SUVs from its competitors, Maruti decided to begin selling the new Grand Vitara XL7 in India. Customers, which at the time thought twice before even opting for the AC option, got the car as a CBU unit from Japan. The car wasn’t even displayed on showroom floors, the company chose instead to send only select invites for viewing and test driving purposes. Even though it had all the bells and whistles like a 2.3-litre all-alluminum V6 making in excess of 150bhp, ABS, EBD, automatic AC, a well-appointed cabin and the works. Alas, a familiar name and luxurious appointment just weren’t enough to convince buyers to shell out more that INR 15 lakh as the base price for a car from the house of Maruti. Based on all the love and acceptance Hyundai had garnered from India, in the early 2000’s they concluded that the country was ready for a taste of the Terracan. It was essentially the first of the big, brawny ladder-on-frame chassis welding full-size SUVs that we oh-so-love and even preceded the mighty Fortuner by half a decade. This was a fairly confident and groundbreaking move by Hyundai for the time. It had a powerful 2.9-litre diesel engine with 148bhp and 383Nm of torque, with a 5-speed manual transmission, a shift-on-fly AWD system and even a limited slip differential. It was luxurious too, with standard fitment which included leather seats, automatic temperature control, electrically adjustable ORVMs and a semi-digital instrument console. Where they once aimed to reach the vast majority of Indian car buyers with the Santro, it was now aiming to reach the attention of the fairly well-to-do. It was imported in as a CBU unit from South Korea and that factored in the pricing at just a shade under the INR 20 lakh mark. While the company justified the move as production expansion, the customers at that time failed to see eye-to-eye with Hyundai and its visions for the now-lucrative SUV market. Eventually, the Terracan, like the other SUVs on our list, was quietly taken around the back of the barn and shot in the head. The time was 1991 and India, as a country was just beginning to bare the sweet fruits of economic liberalisation. Tata envisioned that Indian car buyers were ready to taste the delights of some home-cooked SUV goodness with a sprinkle of fancy gadgetry. The Tata Sierra was launched to mixed reactions. It was completely designed and developed in India, and had a unique design which caught the fancy of many but the  hearts, of just a few. It came a 2.0-litre turbo diesel engine which developed 68bhp and 110Nm of torque. It was loaded with tech too, which was hardly a priority for any at the time. Luxury fittings included power windows, power steering and even a tachometer, which was a first for any car in our country. Sadly, the Sierra was a niche product and failed to generate the kind of volumes Tata had hoped for, from a country on the rise. 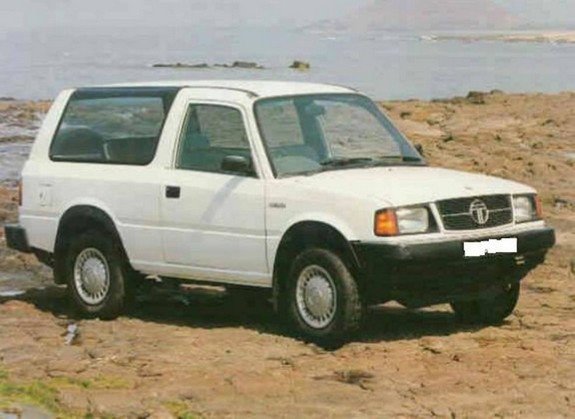