2017 Renault Captur: Will it be the next hit for Renault?

Making it international debut back in 2011, but until 2017 did its make appearance in the Indian market. This promising car is expected to be the next success for the Renault after the Duster. Let's read the following review to know if this car is capable of making its way to the top in the Indian market just like Duster did.

Renault was among the first manufacturers to enter and venture the mid-size SUVs segment. As the result of the good timing, Renault has gained their well-deserving success with the Duster. However, with many new players–notably Hyundai Creta–to enter this profitable market, the Renault Duster has lost the prominent status in the segment. As a step to improve their recent performance, Renault has introduced its new premium crossover named Renault Captur which will lock horn with the Creta.

Unlike the international market in which the Captur is developed on the platform of the Clio, India-spec Captur is based on the Duster. In the Russian market, you might find the Captur under the name Kaptur.

It is also worth mentioning that the Captur stands at a respectable ground clearance of 210mm. Moreover, it is the widest and longest car in its class at 1813mm and 4329mm, respectively. And the wheelbase of 2673mm is not insignificant either. Renault has gone a long way in designing its new crossover, creating a distinctive model from its previous model. While the Duster brings the conventional SUV styling with muscular, boxy and sharp design elements, the Capture is more on the soft and curving side. It doesn’t have the rugged and imposing high-raised bonnet, instead, employs a swooping front face. The styling and curvy grille is flanked by two winding headlamps. Plus the shoulder line highlights its charming charisma. The dual tone bumper applies horizontal slat on its air dam, which resonates with the above grill. What’s more, it comes with LED DRLs on the fog lamps, full LED on the headlights as well as on the taillight. The front of the Renault Captur is appealing with curvy lines 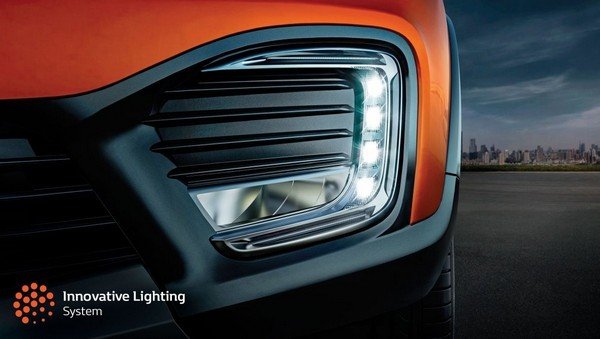 The LED lighting is fondly used throughout this crossover from Renault

On the side, the Capur looks sleeker with a floating dual tone roof (dual tone is optional but it absolutely worth it.) Renault doesn’t forget to add slashes of body cladding to the door as well as to the flared wheel arches to make it look SUV-ish, not to mention the impressive alloy wheels. The side profile looks balanced and proportionate. The side profile of the Captur looks refined and balanced Moving toward the side, you can see that it inherits certain features from the hatchback Kwid. Generally, it echoes the design from the front with a curved rear windshield and taillights. If it wasn’t for the dual tone plastic bumper, you might mistake it for a hatchback. Especially, the Capur offers a good deal of customization choices, providing the customers with a wide range of styling options.

The interior color applies the dual tone theme with black and grey coherently mixed on most parts of the car, for example, on the dashboard, car doors, and seats. Its interior design is on spot, which looks eye-pleasing smart and styling. The layout is simple and straight-forward, allowing a high practicality. But the biggest miss of the interior is the use of the hard plastic, which has downgraded the overall design a lot and doesn’t seem to be in line with its claimed premium SUV tag. 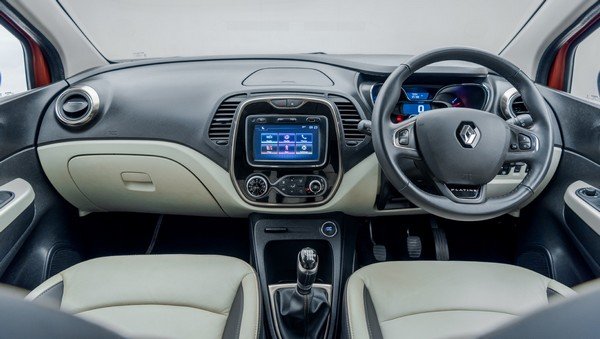 Inside the Captur, the interior is well-designed and good-looking

The seats on the front as well as on the rear offer a supportive and good cushioning. But the taller folk might find it deficient in thigh support. The Captur offers a good space, but still, doesn't seem to match it its dimensions

From the given dimension of the Captur, you might expect a generous and roomy cabin inside. But, disappointingly, Captur’s interior turns out to be an average-sized one with just enough headroom and knee room. It houses a 390-litre boot space. 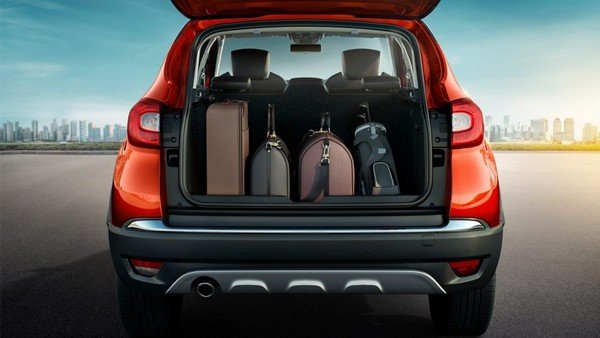 The Captur is fully-loaded with a pack of features. Notably, it comes with a 7-inch touchscreen with a reversing camera which resembles one from the Kwid. However, Apple CarPlay and Android Auto support are not available in this unit. What’s more, the six-speaker audio system of the Captur is of good quality. 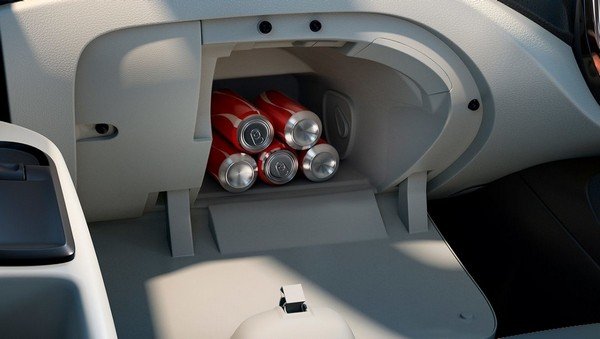 Inside the Captur, you will find a lot of comfort features, like this chilled glovebox

The standard features also include keyless entry, engine push start-stop, and automatic climate control. It also offers automatic headlamps, rain sensing wiper as well as chilled glovebox. At the rear, passengers will get AC vents. Renault also generously treats the Captur with an abundance of LED use ranging from the exterior to interior lighting. Another interior miss is the split 60:40 rear seats. 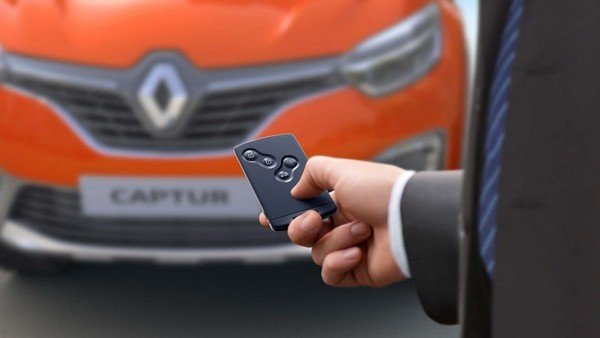 Renault Captur also plays big with its safety kit with Dual front airbags, ABS with EBD, ISOFIX child seat and brake assist coming as the standard features. On the higher variants, the Capture is added with more airbags, hill-hold assist, ESP and rear parking camera with a sensor. 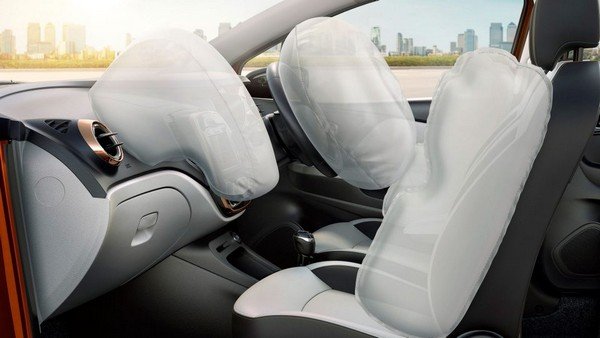 The 1.5-litre K9K oil-burner creates 110 PS of peak power and 240 Nm of peak torque. One encouraging feature of the engine is that there is hardly any turbo lag. Moreover, at low revs and mid-range band, the car is lively and smooth. The full-loaded capacity could not prevent it from adequately performing. With the assist of a light clutch, the Captur makes a great company at city driving. On the highway, the performance is not less impressive. It remains powerful until reaching the top-end revs, making it a good highway runner as well. What’s more, the NVH level is improving a lot from the Duster with less noise penetrating the cabin. 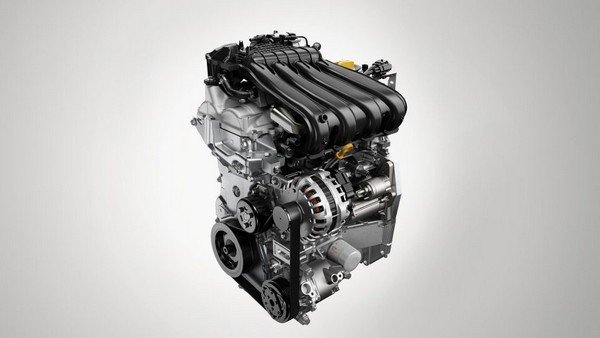 Renault Captur comes with both diesel and petrol engine, both displace 1.5 litres of fuel

The petrol unit could churn out 106PS of power and 142Nm of torque, and come with a 5-speed manual transmission.

Sharing the underpinnings with the Duster, it is no surprise that the Capture gives out the same handling feels. They both are stable and pliant. Bumps and potholes are ironed out in such a good manner that you can tell when sitting inside the car. Steering is responsive and well-weighted when the car speeds up. It could be regarded as one of the best steerings in its class, which leaves us with no complaint. 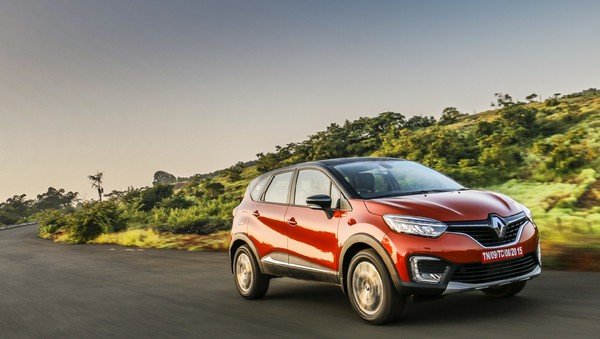 It seems that Renault has made it a right choice with the debut of the Captur. The car offers a touch of premiumness as what Renault promises. And its performance is decent too.

-    Full-loaded feature list as well as a fulfilling safety kit

-    No offer of automatic transmission

Renault HBC (codename) is a sub-compact SUV that will be positioned close to the Triber and, in all probability, lower than the Maruti Vitara Brezza