0 0
Buying a Tata Safari always meant that you have reached a point in your life. Now, Safari itself has reached a point where it has gained a Storme suffix. But is it all the Safari you would ever need to go on a safari through a storm? Let's find.

Tata Safari was launched back in the year 1998 and it will now be bidding goodbye to the production line with a lifespan of almost 22 years. Safari was initially designed as a family SUV for European and Indian markets. It was based on the same chassis as the Telcoline and the shared the same 87PS 2.0-litre turbocharged Peugeot diesel that was doing duties on the pickup. Things, however, changed for the Safari in 2012, when Safari earned itself a Storme suffix. The suffix gave the car a refreshed design on the outside and a revamped dashboard on the inside, and also a Varicor engine. But was it all that was required to help Safari hold on to its legacy? We find out. Tata Safari Storme is a big and brawny SUV on the outside and catches a lot of attention when on the road.

The word ‘Safari’ means an excursion to watch wild animals in their natural habitat and that’s the reason Safari was designed like a full-fledged offroad-worthy SUV or Tata named its full-fledged offroad-worthy SUV ‘Safari’. That said, Safari in its Storme state of the update is more of an evolution than revolution. It carries that typical Safari silhouette, but without a tailgate-mounted spare wheel. The Strome has also ditched a lot of curves for some straight lines, which hints towards some Land Rover design cues.Front View 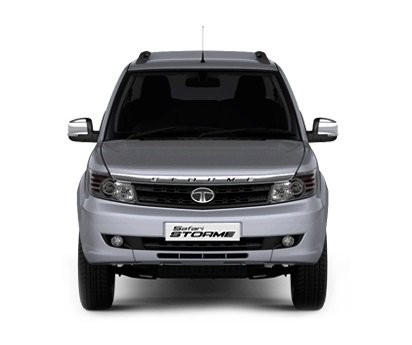 From the front, Tata Safari Storme has an uncanny resemblance to the Rovers, thanks to the new grille and clamshell bonnet.

The Strome has a similar windscreen as that of the older Safari and that is the only design component that has been retained here from the older car. Yes! Rest everything is new. It now gets a slim air dam on the lower bumper and so is the grille now. The clear lens headlamps are also slimmer now in comparison to the old model it replaces. Holding all the design slimmer design elements in place is the new clam-shell bonnet that also gives the new Safari Storme a very Land Rover-ish appeal. Overall, the face is clean and looks upmarket as Tata has refrained itself from keeping front fascia of the car busy and cluttered. The thin strip of LED-DRLs mounted on the front bumper, however, looks like an afterthought. 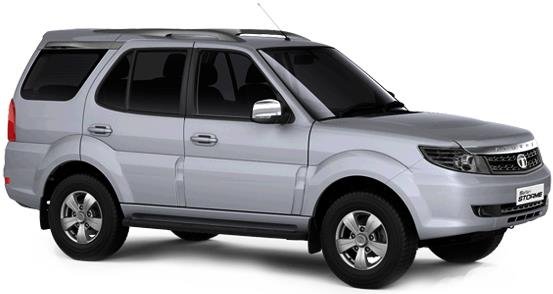 Much has not changed on the sides of a Tata Safari Storme in comparison to the older car, as it still retains the legendary Safari silhouette.

An SUV without any visual bulk on its side fails to classify as one. Safari with the Storme moniker has lost a little on the length as the spare wheel is now moved its position to under the body from the tailgate. The new bumpers also add a little more maturity to the car’s design; however, the prominent Safari window line shouts out loud that it is a Safari. With new 5-spoke alloy wheels, door handles, and body cladding, the Strome has parted ways with the senescence for some modern feel to the car. Moving to the modern dimensions the car hasn’t compromised on any of the SUV credentials. It has a large glass area with 3 proper windows and the 3rd rear window or the quarter glass also mimics the windows of a Discovery 4 with silver inserts above it that tries hard to resemble an alpine window. 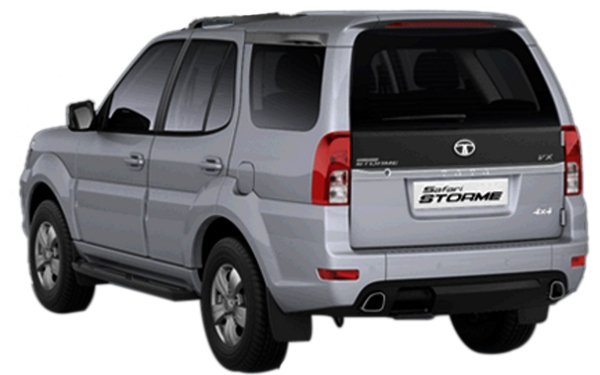 Safari has now ditched the tail-gate mounted spare wheel for a cleaner and matured look.

Identifying a Safari was always easy with its tailgate-mounted spare wheel but with the addition of Storme suffix, Safari lost the tailgate-mounted spare wheel. This gave the car a matured rear end, which never excited anyone for sure. Apart from this major change, the rear facet of the car also received itself a pair of new tail lamps and also a bumper. However, Tata has used the same windscreen as of the old Safari, which means there’s a canvas of sheet metal expanses left unattended on the tailgate. Tata tried its best to make use of that empty place by painting it in two different shades and shifting the number plate housing assembly from the bumper to the tailgate.

Safari Storme is a massive SUV by all measurements, and helping the car with those proportions are its dimensions and a kerb vehicle weight of 2030 kg. The Safari Storme measures at 4655 mm in length, 1965 mm in width, and 1922 mm in height. Thus, the SUV also has a road presence that can dwarf overs almost every other car on the road, while with a ground clearance of 200mm Safari Storme can tower over almost any speed bump without scraping its underbelly. With a boot space of 981 litres when the 3rd-row jump seats are not in use, Safari Storme proves itself as a potent overlanding SUV. Also helping it do the task is the 63 litres fuel tank. All of this bulk sits on 16-inch wheels which are shod with 235/70 R16 rubber.

Tata Safari Strome is one massive car and the dimensions of the car aid the SUV in doing so.

On the inside, Tata Safari is more spacious than a studio apartment (Pun Intended). The space on offer inside this SUV is actually more than what 5 average size adults would ever need. The car also offers a luxurious cabin and big seats to accommodate the largest of human beings. Storme does lack a modern-day amenities seen in the latest SUVs or crossovers taking over the market, but you do get all the basic comfort and convenience feature that you might ever need in a car. But what? Let’s find. Safari Storme is a 7 seater full-size SUV, however, the 3rd row in the car isn’t ideally the best iteration of a seating layout for a 7-seater car. That said, first and second row are super-spacious and comfortable, while the 3rd row gets a set of two jump seats facing towards each other. With both the seats the place there’s hardly any boot space left to use as the seats are placed in the boot itself.

Safari Storme will soon be discontinued from the market as the car is not capable enough to withstand the compliance with the latest safety compliance of AIS-145. Although, the car gets a few safety features like the dual-front airbags, ABS with EBD assistance but only on the higher variants. Safari might be a bare-bone-basic car in terms of passive safety features; the car uses a safe architecture with intelligent integration of structural safety consideration in the frame’s design. It gets a fairly large crumple zone at the front and side safety bars to further enhance its safety quotient. With the update, Safari now gets a new steering wheel and a Harman music system, but the traditional watch fixed in the dash is now gone.

If a big car or rather say a humongous SUV isn’t comfortable, it doesn’t make sense to buy one. Folks at Tata knew of this fact and they designed the car with whatever they could do they make the Safari a comfortable car. Tata performed this job by adding features likes Connectnext Harman system with steering mounted audio controls, reverse parking sensors, adjustable steering column, remote central locking with flip key, electronically foldable and operable ORVMs, manual-dimming IRVM, separate arm-rests for driver and co-passenger. The rear seats of the car also get an armrest that has space to hold two cupholders. Apart from all these features, the car comes loaded with a shift-on-fly mechanism for the 4wd system.

On the security front, Safari Storme isn’t short of any gear to keep itself and the occupants secured. It comes with security aids like engine immobilizer, central locking, and child safety lock. Apart from these, Safari Storme also gets a door ajar warning and key-out warning for headlamps on.

On paper, Tata Safari Storme gets two engine options. Technically, it is just one engine in two different states of tune. One seen on the lower variant produces 150PS and 320Nm while in the higher state of tune this engine churns out 156PS and 400Nm as its peak power output and these engines comes mated to a 5-speed and 6-speed manual transmission respectively.

Safari is still a capable car when it comes to driving aesthetics. There’s noticeable body-roll as the car is tall, but with double-wishbone with coil springs at the front and a rigid axle with coil spring type 5-link suspension on the rear, Safari can eat potholes in breakfast, speed bumps in lunch, and all sort of remaining undulations in the dinner. Safari comes equipped with a potent suspension and mechanical hardware to take on the path less traversed.

The hydraulically assisted steering is easy to work around in both city and highway conditions. The clutch action is also progressive as it gets a self-adjusting clutch. The engine here (one with 400Nm of torque) has the highest power figures on paper and is capable enough to propel all those 156 horses and 400Nm to the ground. With the assistance of a proper 4wd system, Safari can lay down all of its proper to tackle the worst of the terrains. To hail its prowess off the road it gets a shift on the fly mechanism for switching in between 4wd-low, 4wd-high, and 2wd-high, and a limited-slip differential at the rear axle. On the road, Safari is one comfortable car and it is only the big craters that can disturb its stability. As said earlier, it is a shies a little form the corners but can enter and exit them with grace, which is acceptable for an SUV of this size. There's a sufficient amount of body roll when it goes around the corner, but on straight roads, Safari cruises with ease and can eat up all the undulations you throw at it.

NVH levels on the Safari are an uncontrollable affair. Even Tata fails to do so. With age, it starts rattling and one can also hear squeaks from the doors panels and other plastic panels.

Tata Safari Storme has ARAI claimed fuel efficiency figure of 14.1 kmpl for a combined runabout in city and highways. In real-world condition, Safari easily returns a fuel efficiency of 12kmpl in the city and a 14-15kmpl on the highways. These figures coupled with a tank capacity of 63 litres gives this car a tank range of more than 800 kilometres.

Tata Safari Storme is available in 5 different colourways, and they are Arctic White, Pearl White, Arctic Silver, Sky Grey, and Urban Bronze. Those opting for the base-spec LX will not have many options to choose from as it can only be had in just Arctic White colour scheme. Safari Storme is all set to go off the shelf soon as the manufacturer has decided to pull the plugs on this legendary SUV, but it is a considerable purchase if you are a Safari patron.

Tata Safari has always been a car that almost every Indian dreamt of buying at least once but the tantrums that car threw in terms of its poor after-sales and service made potential buyers change their decision. Things are now changed with the new Varicor 400 motor. It is now peppy and can be driven around almost anywhere with A/T rubber. Given that the car is massive, has a space of a living room, glides over craters like a flying carpet, Safari Storme is a viable option for those plan to go off the beaten path quite often. Although, those commuting around the city around the year and looking for a car loaded with features should rather be looking elsewhere.