Also being called the Kool Utility Vehicle, Mahindra KUV NXT happens to be the very first endeavour by the manufacturer to experiment with the crossover segment.

After the first six months of launch, Mahindra KUV100 started to lose ground to other cars like Maruti Suzuki Ignis and Hyundai Grand i10 over styling and convenient features. The situation required prompt action from Mahindra and 21 months was all we had to wait to see a complete makeover of the outgoing KUV100 – the KUV100 NXT. Also called the Kool Utility Vehicle, this happens to be the very first endeavour by the manufacturer to experiment with the crossover segment. Simply put, the car is an oversized hatchback and doesn’t look that much different from its predecessor; however, it comes with many changes in terms of features and devices. This article offers you an in-depth look at the car’s new features which will help you make the decision on whether to buy the vehicle or not. At the first glance, the car obviously retains the KUV100’s contours. Zoom in on the details and you will start to notice quite a host of alterations which altogether bring about the difference here. The front grille is the first feature to catch our notice. It gets redesigned and chrome inserted, giving off a very bold and pronounced look, with the sunglass-themed headlamp clusters on both sides being accompanied with new DRLs. The new look can also be said of both front and rear bumpers, which are covered with silver skid plates. And thanks to the 25mm more added to its length, the vehicle itself has a boost-up in ramp angles, amplifying its performance on rough terrains.

The wheelset, for its own part, gets the fancy and smart 15-inch diamond cut alloy wheels, while wing mirrors are equipped with turn signals. Other new devices include tail lights with clear lens, sharper swage lines and the rear spoiler highlighting the rear profile of the car. Regarding paint colours, the SUV comes with 2 dual paint options, which include red or silver shade with black top, along with six other single colours: Dazzling silver, designer grey, fiery orange, midnight black, pearl white. Arguably speaking, the KUV100 look much more trendy compared to its predecessor; the new design, without doubt, redefines the vehicle’s segment, which is more of SUV than the hatchback. Once again we’ve got the chance to appreciate elegant and sophisticated interiors of the KUV100 in its facelift – the KUV100 NXT, whose top-spec K8 variant gets the majestic all-black version, which in turn amplifies the cabin’s charm. On the whole, we still have the spacious cabin copied from the old car, which means there is a comfortable room for occupants of both rows. The previous grey covering is now replaced with black upholstery – quite a match for the piano black dashboard. Meanwhile, the familiar and user-friendly controlling knob to the A/C is replaced by buttons which may not fit the taste of many folks.

However, the most notice-worthy improvement should be the brand new 7-inch touch screen system in place of the retiring 2-DIN audio one. Undoubtedly, the most notice-worthy change is the brand new 7-inch touch screen system in exchange for the old-fashioned 2-DIN audio one

The whole system comes with a total package of USB, mp3 Bluetooth and integrated navigation but unfortunately, miss out on Android and Apple CarPlay; displays intel and status of the vehicle like fuel efficiency and DRL settings; and proves to be accessible. Other convenient features include power-foldable and adjustable ORVMs, LED interior lighting kit, start-stop function, power drive mode and eco mode, rear sensors, to name a few. Safety set coming as standard across all variants incorporates dual-front airbags, antilock braking system alongside electronic brakeforce distribution and speed sensing auto door lock. The seat configuration has no change in a number of seats ( can be five or six depending on the variant). Unchanged boot space remains at 243 litres, and is customizable, which means it can be increased up to 473 litres for luggage. 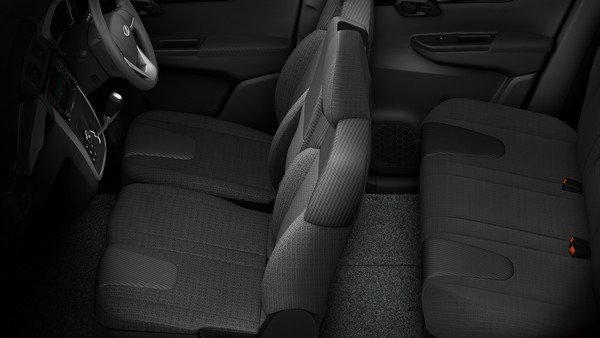 There is no alteration to the seat layout, it remains 5/6-seat depending on the variant Mahindra KUV100 NXT 2017 is to go with either the 1.2-litre G80 petrol engine or the 1.2-litre D75 diesel engine. Only manual transmission is available

The falcon twins 1.2-litre G80 petrol and 1.2 litres D75 diesel engines of Mahindra KUV100 will once again be on tap, and both mated to a five-speed manual gearbox - neither get an AMT option, which may make an appearance at some point in the early half of 2018 according to the manufacturer’s statement. NVH levels have also been significantly improved, making the car seem much more refined in comparison with its predecessor. Check with the price tag before making the transaction coz you are in no position to splurge on a vehicle. Thanks to the number of seats it offers and is well priced, the KUV100 NXT is a good option for budget buyers who are seeking for a family car but do not have money to squander around. People with a thing for a mini SUV, which means compact but offers generous cabin, may find this car worth a shot. In addition to that, the advent of 2017 facelift finally gets the KUV catch up successfully with other cars of the same segment by counting in many other convenient features.

The car starts at Rs 4.51 lakhs with the K2 6 STR variant. That said, the K8 variant, in particular, have an average on-road price of Rs 7.46 lakhs, making it less appealing being placed beside other more refined opponents of the same price like Maruti Suzuki Swift ZDi and the Ford Figo Titanium Plus TDCi.

Mahindra KUV 100 NXT 2017 is available with 4 color options including:

>>> Here is a video KUV100 NXT Adventure Drive from Mahindra