You will know a Mahindra car when you see one, and it doesn’t take much of effort to pull that off. They’ve got the similar looks which grow out of one core design. But the same thing can be said of tons of cars out there roaming the roads of India, and that doesn’t necessarily mean the style is boring and repetitive. Actually, it is the opposite, the design itself is the trademark of the brand and it sears the image of Mahindra car on your brains. The Scorpio 2018 facelift carries on this very trademark of a look with a total package of hot updates which catches up with the trend and proves its worth with the clients. The first feature to be noticed (since it is too conspicuous) is the imposing brand new-looking 7-slat grille at the car’s front part, being chrome highlighted which contributes a lot to the vehicle’s highboy stance and getting flanked by headlamps on both sides. Redesigned fog lamps get chrome treatment and ORVMs are paired with side indicators; meanwhile front bumper (with horizontal air intakes) doesn’t get much of a change with skid plate getting nothing to flaunt about but some minor touch-up. The side profile remains the same except for the new flashy wheelset. For the rear end’s part, the revised tailgate section comes with new boot lid. Other updated features (though negligible) include taillights, bumper and skid plate, LED turn signals, etc. In short, it’s fair to say that the SUV hasn’t seen much of change to the appearance, just enough to make it not be mistaken with the model. 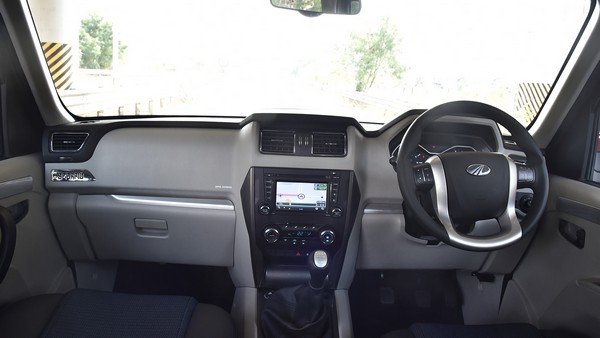 Moving to the under-skin modifications, the SUV gets redesigned dashboard housing the new 6-inch touch screen infotainment system, which is integrated with multiple-tongued GPS navigator. Having that being said, the system is not designed to be compatible with or yet-to-be-connected to Apple CarPlay and Android Auto, which is quite a shame in terms of inside entertainment. Regarding upholstery, here we have faux a leather for the seat covers, as well gear lever and steering wheel, which receives chrome garnish with the iconic Mahindra oval badge being put at the centre of the wheel. The A/C system goes with Automatic Climate Control, which is a big plus when it comes to dealing with the boiling heat of the Indian summer. Top-spec pieces of equipment like a reverse camera for parking assistance does come as standard across all variants, along with 1-touch turn signal, power windows, rain-light sensor, to name but a few. We can also easily notice new small details such as sunglass holder, phone holder and jump seats of the back seat row.

The SUV retains the old dimension of the last Scorpio. According to Mahindra Brochure, the car itself is 4,456mm by length; the width measures at 1,820mm with a height of 1,995mm and the wheelbase is 2,680mm long wheelbase; in addition to that, the ground clearance is of optimum height which is 180mm.

But the game-changing factor, the silver bullet or whatever you put it, is the new and more powerful mHawk diesel engine of Mahindra XUV500. To be more specific, the 2.2-litre engine comes with the lower-spec variants, generating 120bhp of power and 280Nm of torque. In the case of the higher-end model, this very 2.2-litre unit continues to power the vehicle but with different level of performance, in fact, it reaches to 140bhp of power when the car revs at 3,750rpm and 330Nm of peak torque at 2,800rpm. Furthermore, a 2.2-litre petrol engine is also on offer, and the gearbox option offers a 6-speed manual and a 6-speed automatic transmission. And though the car has no improvement in fuel economy per se which means same mileage, the manufacturer sure did its best to enhance the engine’s performance as a tradeoff for the wasted fuel; to put it in perspective the Intelli Hybrid variant runs with 16.36kmpl of fuel consumption and the base-trim one with 15.4kmpl. NVH (noise, vibration, and harshness) sure was tackled seriously and effectively, giving comfort and an easy feel for passengers; we actually felt the clear difference while driving with the Scorpio for the sake of testing. 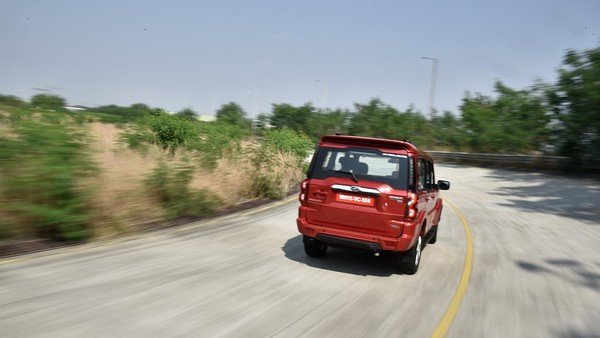 About the safety package, dual airbags for the front seat row appears at all models, along with ABS (Anti-Lock Braking System), emergency brake assist and immobilizer. The manufacturer, as an act of catching up with the trend, has expanded the combo by adding anti-theft system, speed alert system (which helps in maintaining the correct speed to avoid accidents), and power door lock to the safety equipment list, all for the security of car occupants.

Along the same segment of SUV, the Scorpio this time around with all the updates it has received will compete with potential opponents like the sporty-looking Hyundai Creta, the newly tweaked Tata Hexa, the fancy Renault Duster, the handsome Nissan Terrano, and all the other tough ones you can think of. The starting price of the SUV stands at Rs 9.97 lakh for the trim level variants, and then works all the way to Rs 14.78 lakh (ex-showroom New Delhi) for the higher-spec trim of S11. And did Mahindra already pull out all the stops and exhaust all their resources on this Scorpio model or there are still some tricks left they want to save for the upcoming facelift, we don’t know, but the current one sure will not let you down, cause Mahindra always oblige their clients with the best they have.

Here a recent rendering of the new-gen Mahindra Scorpio, which shows all the sides of the upcoming SUV. It will derive power from a petrol and diesel engine.

The new-gen Mahindra Scorpio is likely to be offered with 2.0-litre petrol and 2.2-litre diesel engine options. The Mahindra SUV will compete with the likes of Tata Safari.

An all-new Mahindra Scorpio is likely to enter the market by the end of this year. The new SUV was spotted during a high altitude test in Manali, Himachal Pradesh, alongside a Mahindra Thar.