Tata Harrier Test Drive Review gives you an insight into the most modern Tata car ever, with full details on specs, interior, features, mileage and more

This article is going to provide you with a detailed Tata Harrier review, which is currently considered the most modern Tata car ever.

Debuted as the H5X concept at the Auto Expo 2018, the long-awaited Tata Harrier was launched on January 23, 2019, and has soon become the flagship model from the home-grown auto manufacturer. Some of the main highlights of the SUV include its Omega Arc platform, which is based on the L550 architecture of the Land Rover. Another noteworthy point of the vehicle is the 2.0-litre diesel motor sourced from FCA which has been branded as ‘Kryotec’ when it serves as the power provision source for the Tata Harrier. Moreover, despite being aggressively priced, the Harrier is still well-equipped right from the base variant. Let’s come to the detailed review of the Tata Harrier as regards its design, specifications and price list which will help you gain an insight into the most modern Tata SUV in India. The Tata Harrier was launched on January 23, 2019, at an aggressive price range.

To be more specific, the exterior of the Tata Harrier comes with a unique front fascia with a tri-arrow pattern and a Euro-spec multi-tier lighting arrangement. Some of the outstanding exterior features in the front of the Tata Harrier include blade-shaped DRLs which have been doubled to serve as turn indicators and contribute to the freshness of the vehicle. Furthermore, a low-positioned system of HID projectors is placed between the fog lamps. The Tata Harrier front looks almost similar to that of the H5X Concept.

With only a quick look at the side profile of the Tata Harrier, it is possible to realize its bold stance and large dimensions which will be elaborated in the next section. Some of the outstanding features which are equipped on the side profile of the car include ORVMs, an upward sweeping beltline, a blacked-out D-pillar to create an effect for the floating roof, flared wheel arches and five-spoke alloy wheels. In the rear, you can easily recognize the LED tail lamps which perfectly match the design of the front and the Harrier badge which is positioned in the centre. The Tata Harrier side profile indicates its great dimensions and bold stance. The rear of the vehicle properly matches the front.

While the design is a matter of personal taste, it is undeniable that the Tata Harrier has a butch and aggressive appearance, which is typical of an SUV. That said, to deal with the increasing Indian auto buyers’ boredom with the traditional design of SUVs, Tata Motors has given the Tata Harrier a unique and contemporary design, which will help the Tata Harrier look good even in the long term. The SUV is sure to attract everyone’s attention at any times and in any places it appears.

Whereas the exterior remains almost all the characteristics of the H5X, the interior of the Tata Harrier gets a more traditional design with control buttons and knobs, unlike the concept model which come with touch panels. Nevertheless, the overall cabin is still so high-quality that we would have difficulty in finding any low-quality plastic materials inside. It features an upmarket dashboard with a piece of faux wood and the top which is made from soft material. Moreover, the cabin also sports premium oak brown seat coverings. The air vents and the door pads get metallic trim, which can also further enhance the premium feel of the Harrier.

The Tata Harrier’s cabin is packed with a wide range of top-notch features. Particularly, the top-of-the-line Harrier XZ is packed with the whistles and the bells. Being the largest-ever touchscreen infotainment system in any Tata products, the 8.8-inch unit found in the Tata Harrier supports Apple CarPlay, Android Auto and reverse parking camera connectivity. Tata Motors has also equipped the SUV with a 7.0 screen which takes up most of the instrument cluster to showcase the tachometer and plenty of other information. Other outstanding interior features of the Harrier consist of automatic wipers, automatic headlamps, an 8-way adjustable driver seat, a multitasking driving wheel, a cooled storage box which is positioned below the front armrest and rear AC vents which are mounted to the pillar. The Tata Harrier is packed with a wide array of top-notch interior features.

It would be no exaggeration to say that the Harrier is a strong athlete when considering its build quality and reliability. Borrowing L550 architecture from the Land Rover, the Tata Harrier is underpinned by the advanced OMEGA Arc platform, which gives the car a lighter weight and also makes it easier for the car to be made from the high tensile materials such as the high strength steel. This helps reduce the vibrations and the noises to a great extent.

Moreover, the Tata Harrier also ensures both the driver and the passengers a safe journey with a wide array of safety features, among which some outstanding ones include 6 airbags and ESP with 14 additional functionalities.

Although the Harrier is a 5-seater SUV (the 7-seater version is expected to be launched later this year), thanks to the large dimensions, the Harrier comes with a roomy cabin. Both the front and rear passengers can have an enjoyable journey with amber headroom, shoulder room and legroom. Particularly, the roomy leg space makes the new model become a favourite chauffeur-driven vehicle of any Indian auto enthusiasts. Also, the cabin comes with multiple cubby holes which serve as the storage space for passengers’ personal things such as mobile phones, tabs or even umbrellas. The 425-litre boot space sounds not too large but has proved its practicality when managing to carry many bags and shooting equipment. However, we have difficulty in accessing the front and rear 12V socket and near the A-pillars exists a large blind spot.

Overall, the Tata Harrier is a spacious modern vehicle which is equipped with a wide array of cutting-edge convenience and safety features. While it is not flawless, it deserves to be called the most modern car in India.

Being a full-size SUV, the Tata Harrier measures 4,598 mm in length, 1,894 mm in width and 1,706 mm in height. It offers a 2,741 mm wheelbase and a 205 mm ground clearance. As mentioned before, the great dimensions would translate into a bold stance and an amber cabin of the SUV.

The Tata Harrier is powered by a detuned version of the FCA-sourced 2.0-litre turbo diesel motor with 4 cylinders which is borrowed from the Jeep Compass. This version can produce a maximum power of 140 PS instead of 173 PS as in the Jeep Compass, but the torque has been maintained at 350 Nm. Currently, the transmission duties are undertaken by only a 6-speed MT gearbox with the automatic option expected to be introduced at a later stage.  In spite of a reduction in the power and the increase in weight, the Harrier can still deliver a good performance.

While the driver can use the ‘Eeco’ mode to deliver a higher fuel mileage figure when travelling in congested roads, even the ‘City’ mode can deliver a good performance in most conditions. Having said that, it is highly recommended that the ‘Sport’ mode should be used on the high way. With this mode, the Harrier can provide both the driver and the passengers with the most pleasant travelling experience. 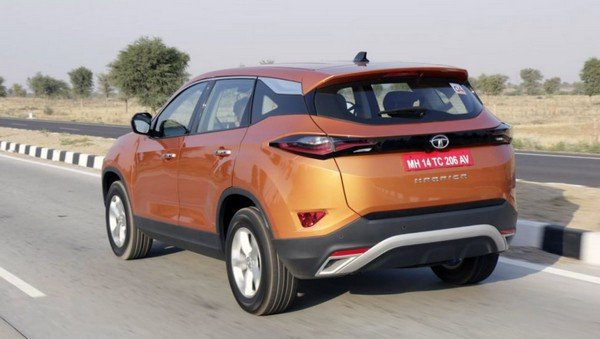 With different driving modes, the Tata Harrier can offer all the occupants an enjoyable travelling experience.

The Tata Harrier also comes with well-controlled turbo lag with only 1,750 rpm. The 6-speed MT gearbox provides good ratios; however, the gearsticks are a little bit notchy. The vehicle’s clutch is not so heavy; nevertheless, the pedal travel will turn an AT gearbox into a long-awaited feature. The NVH should have been better controlled at high speeds.

As mentioned before, the Tata Harrier is a good performer on highways; however, its excellent riding and handling even impress us more. The Omega Arc platform and the Lotus-tuned suspension can deliver good results. The suspension can easily absorb almost all types of undulations, which helps the passengers enjoy the journey to the fullest. The excellent riding quality which can be compared with other premium SUVs helps the Harrier become a reliable companion of long-journey drivers.

The Harrier gets a quite good handling quality, too. Featuring a hydraulic power steering, the Tata Harrier can deal with high speeds with only slight body roll which is an inevitable problem for an SUV of this height. 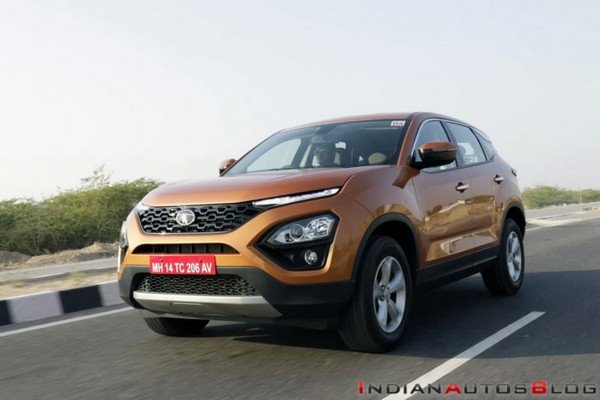 In spite of the absence of the AWD system, the Tata Harrier still delivers good handling and riding quality.

Overall, the Tata Harrier has great dimensions, impressive performance as well as an excellent riding and handling quality.

The Tata Harrier is priced in the range from INR 13.45 lakh to INR 17.30 lakh (ex-showroom, Delhi). In this price range, it directly competes against the Mahindra XUV500, the Hyundai Tucson, the Hyundai Creta and the Jeep Compass. Refer to the table below to check out the price list of the Tata Harrier.

The Tata Harrier, with its contemporary design, modern cabin and impressive performance, has proved that the domestic auto manufacturer has kept up with the trend and managed to satisfy almost all the SUV enthusiasts. However, with the absence of a sunroof, a petrol motor, an AWD system and an AT gearbox, the SUV is not perfect. However, with all the good features abovementioned, the Tata Harrier deserves to be the current flagship model of the home-grown auto manufacturer. The petrol version, the AWD system, the AT variants and the 7-seater version are expected to be introduced in the foreseeable future. With such a competitive price range, unique design and impressive performance, the Tata Harrier pose a great threat to other SUVs in India.

>>> Visit our New Cars page for more information and updates about the upcoming cars and the out-going car models.

Tata Motors has given the Tata Harrier SUV an update with its prices hiked up by over Rs 1 lakh over the earlier version. Are the updates worth your money? Let's find out in our 2021 Tata Harrier review.

Used 2020 Harrier XT plus for sale in Ahmedabad