Read on our intensive review of Renault Lodgy to know what we think about the multi-purpose vehicle. The Renault Lodgy review is written on the basis of prices, features, dimensions, engines and more.

Renault Lodgy is available with 7 variants as below:

While the Indian buyers’ tastes and likeness are not really for the van-like upright stance of the Lodgy in present days, we can’t deny that the Renault Lodgy is an underrated value-for-money MPV car waiting for the opportunity to redefine its prowess. Renault first launched the Lodgy in 2016 and gave it a premium iteration in 2017 with the Lodgy Stepway which fits nicely in the gap between in the upmarket Toyota Innova and the Maruti Ertiga in terms of size and price in the segment. While there are many factors that worked against the Lodgy, leading in a sinking sales volume of the car in India, we decided to work on the Renault Lodgy review to figure out good personalities and characters that the MPV has on offer. 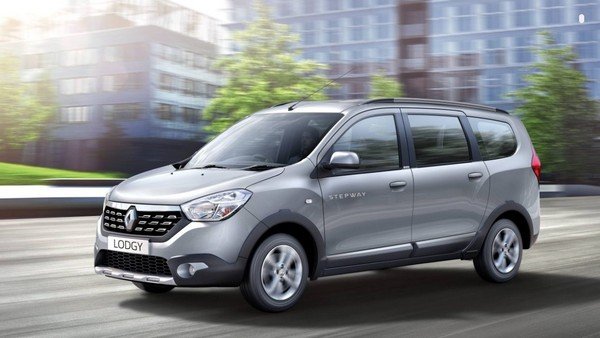 The multi-purpose vehicle segment in India has been changing drastically in the last few years. The demand for rugged-looking crossovers and SUVs is on the steeper side hence many automakers have promptly pushed their existing products and released newer models to meet the rising demands. The Tata Hexa or Innova Crysta are some of the examples and now we have the Lodgy as one such attempt.

The Logdy has got what it would call “success” in India and as I said earlier, the van-like upright stance of the MPV is not really well-received in the competition in recent days. Well yet, just look at it. The Lodgy might not be an SUV-oriented model as the Innova Crysta, but it is a burlier and more rugged MPV, built to offer great comfort and good ride quality on the undulated roads. The Renault Lodgy has undergone a massive makeover in terms of exterior design, especially on the face. The Renault car comes with a large and pronounced grille that features a chrome strip on top. The parallel chrome inserts also add more bling factor to its appeal. The swept-back headlamps look sporty enough to brighten up the front fascia but sadly, they haven’t come with projectors and DRLs unit. What makes the ruggedness of the Lodgy’s front profile is the heavy adoption of plastic cladding along with the silver skid plate on the front bumper, thereby adding to the crossover-ish flavour of the vehicle. Joining with the bumper cladding is the underbody plastic cladding that stretches over the sides of Renault Lodgy. The new body-coloured ORVMs setup looks cool with a black base. The B and C-pillars are blackened out while the silver alloys and roof rails come to enhance the upmarket feel around the MPV. However, the van-like three-box design of the car, which could be easily noticed on the side profile, is something that the Indian buyers do not really appreciate and can cause a bit letdown for them. 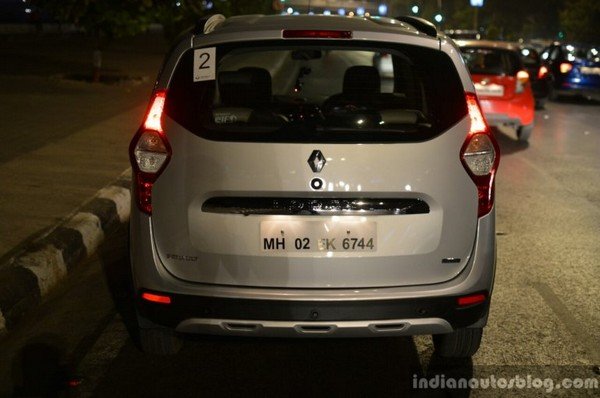 The rear end, on the other hand, boasts a new plastic-cladding bumper and like the front, with silver skid plates. The tailgate is redesigned that fits well with the slightly restyled massive tail lamps too. The overall look of the Lodgy is quite chunky and premium enough the catch the attention of the onlookers from the rear.

The Lodgy is a big MPV that delivers great street presence. In its premium iteration Lodgy Stepway, the sizes of the car even increase by quite a margin, regarding the length, width and weight. Here are the dimensions of the Lodgy:

MPV cars are often known for the comfort and spaciousness and that’s also the biggest USPs of the Renault Lodgy. That said, the three-box design of the MPV has a good point, as once you step inside, you will be awestruck by the grand space that the car offers on the inside. In fact, the Renault Lodgy’s cabin is one of the roomiest in the segment, thanks to the massive wheelbase of 2,810 mm as well as the MPV’s tall stance it offers. The ample space is what the Renault Lodgy excels in and that helps the car accommodate up to 8 people comfortably on the go. The MPV from Renault is available with a proper 7-seater layout that comprises of captain seats in the second row along with an 8-seater configuration with bench seats in the second row. Unlike other MPVs that mostly offer the third-row seating arrangement for kids only, the Lodgy does come with a proper 3rd-row seating good enough for adults.

Be it a family mover, comfort features are what Renault has focused much when building the Lodgy MPV. The Renault Lodgy comes packed with an advanced touchscreen MediaNAV infotainment system available with USB, Bluetooth, Aux supports. However, this infotainment system might not be up to the mark for many, especially when compared to its rivals in the segment competition. Note that the MediaNav system is also offered on the cheaper Duster and Kwid hatchback in the company’s product range. The three-spoke steering wheels offer mounted controls for telephony, music and cruise control. However, the Lodgy misses out on the auto climate control which is another disappointment for the private car buyers. The cruise control it does offers, on the other hand, is not so popular and useful feature on the Indian driving conditions as you need to put a constant foot on the brake pedal to avoid uncalled issues on the roads. Some major comfort goodies highlights on the Lodgy include tilt steering, roof-mounted aircon for the second and third row, power-adjustable ORVMs as well as 12-volt charging sockets along with plenty of storage spaces around the cabin.

On the safety front, it is another letdown that the lower-spec Std and RxE trims are not available with airbags. The higher trim RXL is equipped with diver airbags while the RxZ variants come with driver& passenger airbags. The standard safety equipment of the Lodgy comprises of ABS and EBD, brake assist, engine immobiliser, rear child lock and door ajar warning. The central locking is offered from the RxE trims upwards while the driver seatbelt reminder, auto door lock, rear wiper and defogger are only given in the RxL and RxZ trim levels.

Renault Lodgy is available with one engine and two gearbox options on board. It is powered by a 1.5-litre K9K diesel engine which comes in two different states of tune – an 84 BHP/ 200 Nm and 108 BHP/ 245 Nm, depending on the variant.

The power delivery of the Renault Lodgy is quite linear but there’s some turbo lag that causes some nuisance on the bumper-to-bumper city traffic. The less powerful version seems to be more drivable on the city traffic. The ride quality is of a Renault hallmark, is quite elegant while the suspension absorbs bumps properly.

The Renault Lodgy has a noiseless engine and delivers quite a good fuel mileage figure of around 20 – 21 kmpl (ARAI- tested). That also enhances the affordability quotient of the MPV to a higher level.

Renault Lodgy Price: Is It Affordable?

For a very much full-size MPV, the Rs 8.63 – 12.11 Lakh price range of the Lodgy gives it quite a value-for-money quotient on its boards. The competitive price is also one of the main good points that the Lodgy has to offer. The Lodgy Stepway is priced above Rs 8 Lakh that is pretty lower than the Innova MPV counterpart and almost the same as the Maruti Ertiga. Then, the Lodgy offers a full-size third-row seating and an 8-seater layout that meets the demand of those who requires more seating capacity in the vehicle. To analyze more, the Lodgy comes with quite an affordable per-seat cost.

Renault Lodgy Colours: How Many Colour Options Are There?

All in all, you are someone who is searching for a full-fledged MPV with a tight pocket, the Renault Lodgy is a worthy option for you. But in case you cannot compromise on the quality of the materials on the cabin and load of features and has an eye for a nicer design, you might check some other MPVs car in the segment before giving the final decision. Indianauto hopes that the above Renault Lodgy review could be useful to you when you consider buying a new affordable full-size MPV model. For more in-depth reviews of other Renault cars in India, kindly go for the new car section where you can find most of our review articles written by our experienced authors of Indianauto.

Maruti Ertiga vs Mahindra Marazzo vs Renault Lodgy: Which MPV Is The Best Option For You?

What is the MPV that will be most suitable for you? The value for money Maruti Ertiga. Or could it be the newly-entered Marazzo? And what about the Renault Lodgy? Here is how these three vehicles pit against each other.