The hotter version of the Audi A5, the Audi RS5 Coupe was launched in India on April 11, 2018. Read on our Audi RS5 First Drive Review to know what we had on mind after a quick short spin with the car.

When Audi first reached our shores in March 2007, the biggest challenge for the German luxury brand is that they started from scratch in India. When Audi began its innings in our country, they were wondering what to offer the Indian customers. As the Indian buyers’ predilection is quite special and different from the rest of the world, then to think of the right equipment, the right product for the country is an absolute must. Over times, the company’s Indian lineup sees the presence of four luxury models under "Brat Pack" moniker. Firstly, we have the four-door hardtop coupe, known as Audi A5 Sportback. Then the two-door convertible Audi A5 Cabriolet joined the game two years ago. Understanding the unlimited passion for mind-blowing performance with high speed, Audi moved on with the tarmac-tearing Audi S5 Sportback which is capable of clocking up to 350 BHP/ 500 Nm of torque. Desire is insatiable. Audi knew that well and wrapped up with the RS5 Coupe – the perfect final member of the pack. We took the Audi RS5 Coupe out for the quick spin and came back, totally impressed! Read on our first-drive review of the Audi RS5 Coupe to know how we feel after staying behind its wheels. 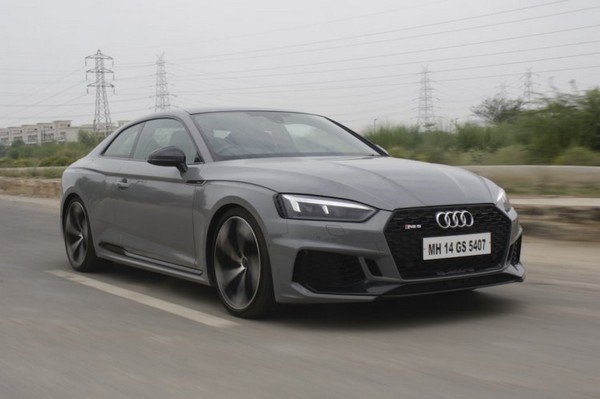 Who could a luxury performance-oriented sedan target to? Quite obviously then, Audi has aimed the RS5 at the young urban tech-savvy buyers who might suppose that the S5 Sportback isn’t getting fast enough. The Audi RS5 Coupe costs at a decent Rs 1.11 Crore, good enough for you to buy a decent-sized house, really. The RS5 does stand out from the crowd. Even in a rather plain-looking Daytona Grey paint option, the Coupe can turn every head at anywhere it goes to. 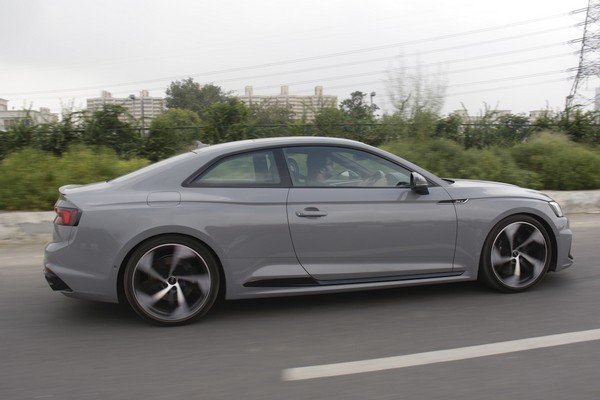 Inherited the elegance from the Audi A5, the RS5 is quite a good looker. Even it fits the coupe-style better than the Cabriolet and the Sportback. The RS5 gets a sporty nose. At the front, the massive blacked-out honeycomb grille housing an RS badge looks prominent. The character lines stretch seamlessly from the nose to the tail makes a good combination with the imposing shoulder lines, giving the car a sportier look. The sharp LED headlights and taillights get some grooves around their outer ends that not only looks pretty cool but also contributes to a better aero performance. What makes this really a head-turner is a set of classy-designed 20-inch diamond-cut alloy wheels on the side profile which should be, doubtless, the second hint of the car’s performance credentials. Besides, the muscular-looking wheel arch extensions have further accentuated the coupe’s distinction. Interesting enough, the RS5’s wheel arches are essentially 19 mm wider than that of the base A5 model. The roof slopes down smoothly and merges well with the boot, the integrated lip spoiler, twin-exhaust pipe and rear diffuser spruce up the aggression of the model. 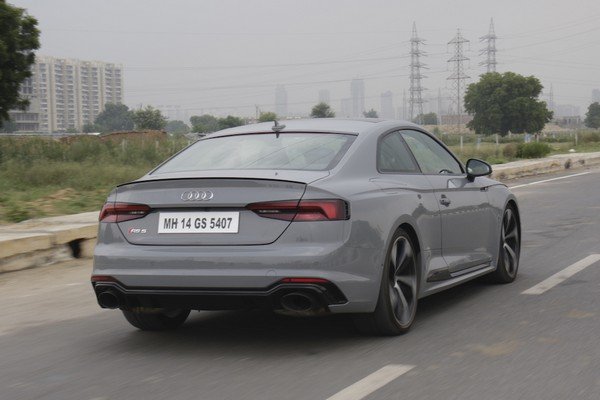 To say a mouthful, the Audi RS5 looks absolutely gorgeous. In terms of exterior design, the coupe gets everything on point. It is apparently nothing short of a looker.

Before revving the engine at three-digit speed, let’s take a quick tour on the inside of the RS5’s plush cabin. Just like the regular A5, the overall design of the RS5 is largely similar. For some people, the interior of the car might be far less dramatic as compared to its appearance. For us, they’re fairly awesome and typical of an Audi car. The MMI infotainment system with Audi’s Virtual Cockpit, which consists of an 8.3-inch touchscreen and a fully-digital instrument cluster, is rather phenomenal to look at. The flat-bottom three-spoke multifunctional steering wheel is leather-wrapped and packed with an RS badge. Other highlighting interior features include a 19-speaker Bang & Olufsen Sound System supporting both Android Auto and Apple CarPlay, cruise control, climate control along with a rearview camera.

Well, we get all leather sports seats inside the Audi RS5 Coupe. There should be little carbon-fibre to speak of and yes, seating inside the coupe is very comfortable. At the front, the headroom and legroom are decent enough to accommodate the tallest of passengers, to say the least. The adjustable front seats with adjustable wings help us find our perfect seating position, not to mention the massage function they have on offer. 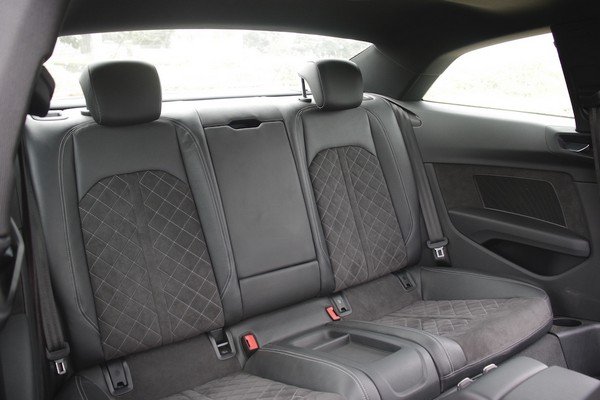 The rear space is not as generous yet it also isn’t cramped. The seating capacity at the rear is two that fit the average-sized passengers properly. However, the under-thigh support is not provided as much as we expect that could make long-distance commute somehow uncomfortable too.

The Audi RS5 offers 455-litre boot lit which is fair enough to pack most of your luggage. It is also worth noting that the rear passenger seats are 40:60 split-foldable, adding more to the car’s practicality.

What makes the Audi RS5’s biggest strength and at the same time, set it apart from the S5 lies in its heart. It’s a new 2.0-litre V6 engine with two turbochargers, same as the one seen in the Porsche Panamera S and Cayenne S. This engine is capable of producing a maximum output of 450 HP and 600 Nm and comes linked with an 8-speed automatic torque converter as most of the new RS models. While it could be as powerful as the V8, its torque is much higher than the latter by 170 Nm. 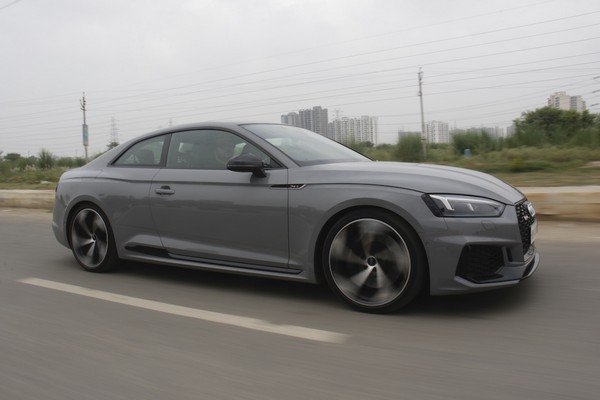 As claimed by Audi, the RS5 Coupe can take off like a stabbed rat and cross the 100 kmph mark from a standstill in only 3.9 seconds. In fact, driving the car at the triple-digit speeds is as easy as falling off a log. As just mentioned, the RS5 uses a conventional 8-speed automatic torque converter rather than the old 7-speed DCT unit. That causes someone to wonder if Audi’s decision is on point but they would just know why once you stay behind the wheels of the coupe. The gearbox is very responsive and in the Comfort mode, the car is refined but surprisingly quick too. If you’re feeling like you aren’t going fast enough, putting into the Dynamic driving mode and things will surely get a lot more aggressive. This 2.9-litre V6 twin-turbo engine might feel boisterous as the Mercedes-Benz AMG G63’s V8 or as characterful as the BMW M4’s straight-six though, it is nice enough to make you “hair-raising” on its own.

At the weight of 1,770 kg, the Audi RS5 Coupe is marginally lighter than the S5 Sportback. In comparison, the RS5 is shorter in terms of length and wheelbase and the sport suspension setup even makes it sit lower than its brother. Combining that with the Quattro system and a rear-biased AWD system, you can find the exact recipe for the thrills and spills. 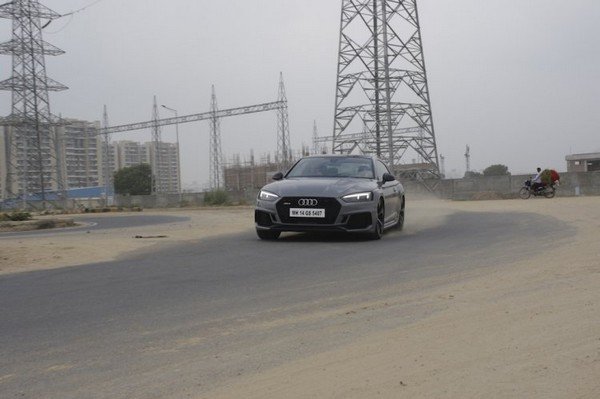 The RS5 feels light to steer and quick in turn-ins as the new V6 twin-turbo is lighter than the V8. The sport suspension soaks up all undulations with little fuss and does a pretty good job in keeping things in order, regardless of the big 20-inch wheels. The ground clearance turns out to be just enough so the larger speed breakers might pose little threat. The Quattro system is, of course, what leads the show. The torque-vectoring LSD seems to sort everything out and you’ll have plenty of grips. Racing it into a corner, the RS5 will understeer then give you plenty of space to apply the brakes, correct your error in a precise and comfortable way. Even without traction control, the car acts without any hesitations. 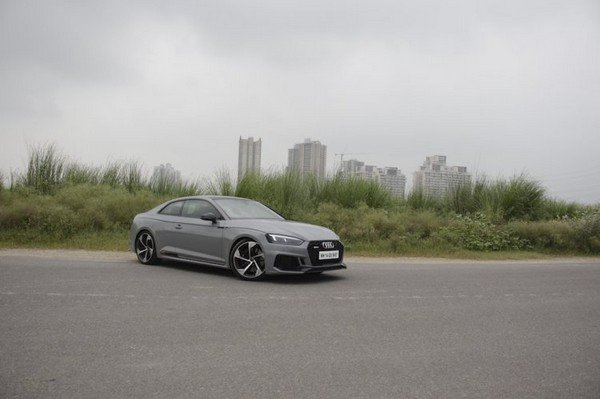 Well, there's a little something that let me get under my skin. Things seem a bit unpleasant on the bad roads. Still, the Audi RS5 is a great car for the daily commutes. We must admit that the variable-ratio Dynamic Steering is the only grouse, especially for our country’s roads conditions. The throttle is, says, too snappy and the steering, though weighs up well in the Dynamic mode, tends to feel uncertain and vague once you go really fast.

To tell the truth, the Audi RS5 has absolutely good handling prowess. It’s a good-looking sports car with a peppy engine that can set everything on fire on the tarmac. However, the hefty Rs 1.11 Crore price tag of the car is always a matter of concern. Is it value for the money? The answer is up to people’s viewpoints and of course, their budget. In my opinion, I prefer the S5 Sportback that is fairly capable and far more practical.