Volvo XC40 is the entry-level crossover SUV in the company's portfolio which launched back in 2018. The SUV rubs its shoulders against the likes of the BMW X1 introduced in 2001, Audi Q3 which came out in 2011 and Mercedes-Benz GLA which was launched in 2014. The XC40 based on the Common Modular Architecture (CMA) platform co-developed by Volvo. Volvo is also planning new strategies to boost production to satisfy the high demand. Moreover, the XC40 has got honoured by the 2018 European Car of the Year awards. In total Volvo offers three SUV in India- XC40, XC60 and XC90. The good part is we've got our hands on the all-new 2018 Volvo XC40. So, here's the review about what we think about the newly launched Volvo's premium crossover SUV. The Volvo XC40 has got honoured by the 2018 European Car of the Year awards.

On the outside, the Volvo XC40 looks like a baby mammoth. At the front, the SUV employs a bold looking piano black grille along with Volvo insignia. The most striking part of the car is the Volvo's conventional projector headlamp with hammer-shaped LED DRL. The lower part of the bumper gets an air damp, front parking sensors and fog lamp which comes embedded into a blacked-out insert. Moving towards the side, the Volvo XC40 sits on 18-inch sporty alloy wheels. The XC40 is offered with two different types of alloy wheels. The first one is a 5-spoke alloy wheel and the second one is the 6-spoke black diamond-cut alloy wheel. Moreover, it gets blacked-out A and B pillar along with glossy black wing mirrors with integrated side blinkers and body coloured door handles. 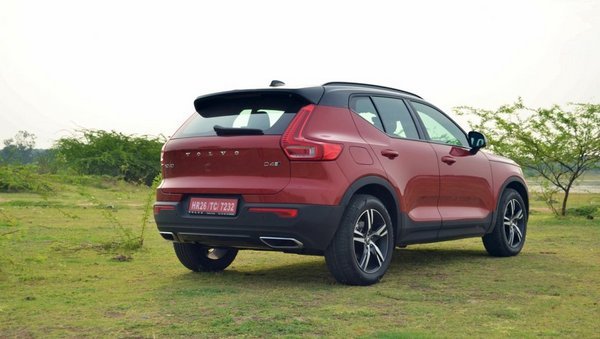 The most striking part of the car is the Volvo's conventional projector headlamp with hammer-shaped LED DRL.

The all black wheel arches and door cladding along with a skid plate at the front and rear signifies the off-road capabilities of the crossover SUV. The car looks quite premium with the employment of a panoramic sunroof, shark fin antenna and roof rails. The most recognizable and stylish part of a Volvo SUV is the rear. It gets uniquely designed taillights, a sport rear spoiler, dual chrome exhausts, Volvo badging, and rugged lower bumper. The Volvo XC40 offers a choice of three colour options – Crystal White, Bursting Blue, and Fusion Red. All three come with a black finish roof. Dimensionally, the crossover SUV is 4425 mm long, 1863 mm wide, 1652 mm in height and has a wheelbase of 2707 mm. The stand 211 mm above the ground and it has a turning radius of 5.7m. The Volvo XC40 tips the scales at 1733 kg. Overall, the design language of the 2018 Volvo XC40 is quite muscular and elegant. 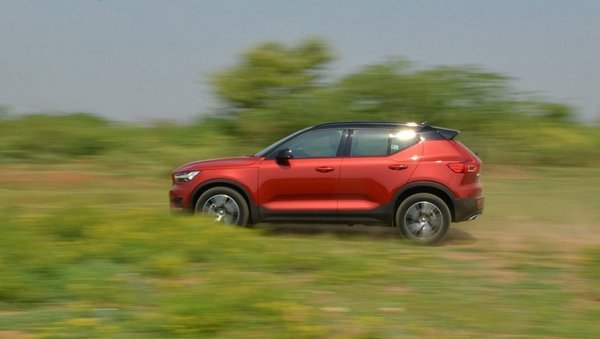 On the inside, the Volvo XC40 looks very premium and upmarket. The centre console boasts a 9-inch touchscreen infotainment system, which looks no less than a tab. The side of the infotainment console bordered, with narrow vertically stacked aircon vents. The instrument console consists of a full-digital unit which gets a speedometer on the left, a tachometer on the right. The middle part of the instrument console displays information regarding temp, time, odometer and warnings coming in through the Radar Based Active Safety package. The cabin of the SUV features leather/nubuck upholstery, steering wheel and gear selector wrapper in perforated leather along with aluminium dashboard inlays. If customers are looking out for something more exclusive than an all-black interior, they can go for a black and lava red combo interior. The front seats provide a plush amount of comfort. The front and rear seats offer an excellent amount of side and under-thigh support. The driver's seat is electrically adjustable and, it also gets memory function. The Volvo XC40 can accommodate 4-5 passengers at once. Moreover, it provides a humongous boot space of 460 L. The storage spaces consist of the cup holder, bottle holders, side pockets and a glovebox. 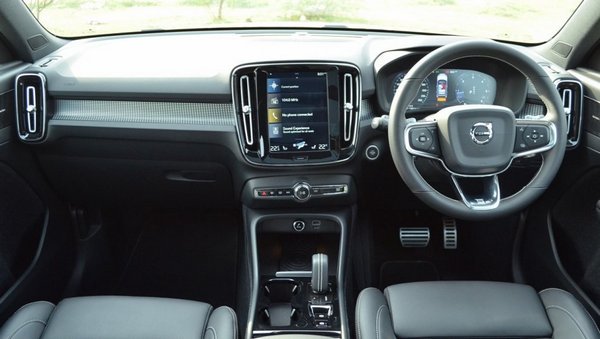 The centre console boasts a 9-inch touchscreen infotainment system, which looks no less than a tab.

The best thing about Volvo cars is it comes loaded with all the bells and whistles this means the XC40 comes loaded with alot premium features which a person anticipates to get from a car of this price bracket. The SUV employs features, like a panoramic sunroof, wireless charging, power operated tailgate, Park Pilot Assist, and a 13-speaker Harman/Kardon sound system. The seats feature heated seats as well, which is questionable in a hot country like India. The 9-inch touchscreen infotainment system supports both Apple Car Play, Android Auto and Navigation. Talking about safety, then most of you may know that Volvo cars are one of the safest cars around the world. The Volvo XC40 is no less it comes with the Radar Based Active Safety suite as standard. City features look out for the safety of vehicles, pedestrians, cyclists, and large animals warning the driver if a crash expected. The car will apply brakes automatically if a driver fails to react, to avoid an accident. The safety feature Run-off road Mitigation assures the Volvo XC40 stick on the road. This safety feature utilizes steering input and brakes to grip you safely on the roads. Other feature like Pilot Assist uses steering input and braking to keep a constant speed and maintain a safe gap between you and the car in front of you. It will also hold the SUV in its path. Feature like Pilot Assist uses steering input and braking to keep a constant speed and maintain a safe gap between you and the car in front of you.

Powering the Volvo XC40 is a 2.0-litre, four-cylinder, turbo charged oil burner which churns out power and torque outputs of 190 hp and 400 Nm. Transmission duties are done by an 8-speed automatic gearbox with an AWD system which sends power to all the four wheels. The diesel engine is fuel-efficient to provide a mileage of 17 kmpl and the fuel tank is big enough to store 57 L of fuel at once. Braking is done with the help of four disc brakes as standard. On the other hand, the suspension duties are done by the front and rear air suspension. The SUV can accelerate from 0-100 in just 7.9 seconds and it can achieve a top speed of 210 kmpl. The power delivery is quite smooth with fair 400 Nm of twisting force as the SUV moves off the line quickly. I really like how smoothly the 5 -speed transmission works by offering favourable shifts. But the car responds a bit lazy at downshifts. The motor provides a sufficient amount of pull until 4,000-4,200 rpm post which power reduces off. The 235 / 55 R18 section front and rear tyres provide a good amount of road grip. The cabin of the XC40 is not that well insulated, engine noise can be heard inside the cabin. Powering the Volvo XC40 is a 2.0-litre, four-cylinder, turbo charged oil burner which churns out power and torque outputs of 190 hp and 400 Nm.

Ride quality can be felt a bit hard while cruising down at slower speeds. But, it automatically feels better as speeds build up. The SUV maintains its control on both on and off-road surfaces. The XC40 comes offered with five different driving modes, namely- Comfort, Eco, Dynamic, Off-Road and Individual. The leather-wrapped steering wheel looks quite premium and feels light on the bumper to bumper traffic. I have driven the car most of the time on Dynamic mode as it adds weight to the steering, intensifies its response making the XC40 more pleasant to drive, which means that the entry-level Volvo SUV is a fun to drive car. The SUV comes loaded with features like driver and passenger airbags, adaptive cruise control, hill start assist, hill descent assist, park assist pilot+park assist, front and rear and rain sensors. 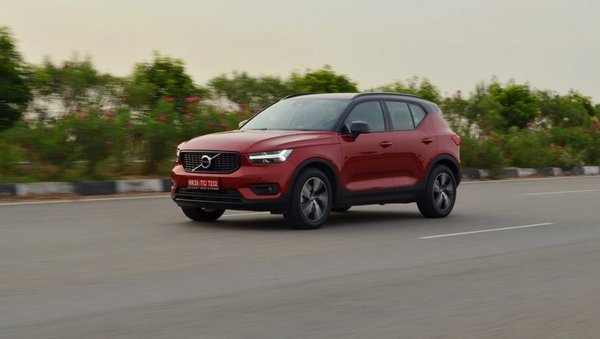 Before I give any of my judgement about the Volvo XC40, let me tell you about some cons of this SUV. The rear seat of this SUV is positioned a bit too upright and increasing window line can make the passengers feel irritated. The car comes available in three attractive colour shades, but I wish there were some more choices. The SUV comes available in two variants Momentum and Inscription which is priced at Rs 39,90,000 and 43,90,000 (ex-showroom, Delhi). The Volvo XC40 looks premium, comes loaded with new features and gets a sufficiently powerful engine and, I guess that the XC40 is the best option in its segment. 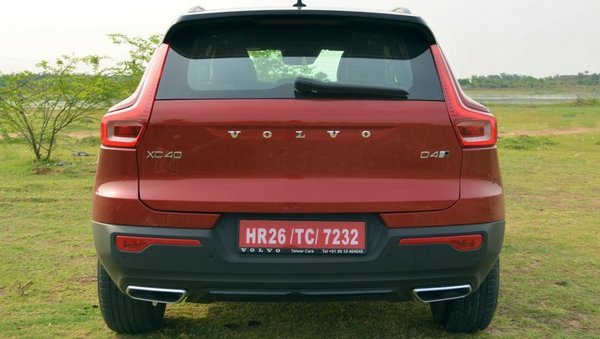 Volvo XC40 is finally showcased in India, and the bookings for the same will open by June this year. Read the detailed report here.

Volvo XC40 Offered With Discounts Of Up To Rs 4 Lakh

Volvo is offering discounts up to Rs 4 lakh on its entry-level SUV, the XC40. The SUV comes loaded with all the bells and whistles to rival the likes of Audi Q3, BMW X1 and more.