Honda, while not managing to attain an as large as market share as Maruti Suzuki and Hyundai, has been successful in creating a certain degree of prestige and trust among the Indian auto buyers, thanks to its products’ appealing appearance and reliability. The Japanese auto manufacturer is popular not only in the new car market but also in the pre-owned one with numerous car offers in both markets. One of the best-selling vehicles from Honda for the Indian second-hand auto market is the Honda CR-V.

TheHonda CR-V has been on sale with good combinations of engines and gearboxes options, making variants of the CR-V for sale in the Indian space over the years as below:

III. Is Pre-owned Honda CR-V a Good Option to Go For?

More than one year ago, the long-awaited fifth-gen Honda CR-V was finally launched in the Indian auto market after witnessing a disappointing total sales number of only 17,600 units over the four previous generations despite arguably being considered to be the most favourite SUV worldwide. In this latest generation, the Japanese automaker has added two things: the third seat row and the diesel engine. These two things have helped its new SUV become a big hit in its segment.

In terms of the exterior, the new Honda CR-V has managed to fulfil the goal of enhancing the dynamics of the SUV over the outgoing model. Thanks to Honda’s evolutionary design philosophy, the 2018 CR-V looks more aggressive and fresher than its previous version, thanks to a wide range of updated features.

As regards the interior, the most remarkable upgrade must be the addition of the third seat row, which transfers the new CR-V to a 7-seater SUV. The 5-seater layout used to be a big drawback which made the CR-V interior to its rivals which are available with a 7-seater layout. This is a big improvement over the outgoing model and can satisfy many SUV enthusiast’s interests and demands. Nevertheless, bear in mind that since folding down the second seat rows is quite time-consuming and the legroom in the rear seat row is quite limited, entering and exiting the third seat row might be annoying sometimes. Having said that, the cabin is large and comfortable in general.

In comparison with the outgoing model, the new Honda CR-V comes with a more premium cabin with an elegant use of mixed materials along with upmarket woods and chromes on the dashboard. Moreover, the SUV also comes with a wide array of top-notch advanced features, which ensures all the occupants a safe and comfortable journey.

Regarding the powertrains, for the first time, the Honda CR-V is offered with an oil burner. The fifth-gen CR-V receives its power from both a 2.0-litre petrol motor and a 1.6-litre turbo diesel unit. While the former can generate 154 PS against 189 Nm, the latter is good for 120 PS against 300 Nm. While these two engines are less powerful than those of most of the CR-V’s rivals, they deserve a thumb up for the decent refinement. Moreover, you can also enjoy the convenience of the CVT and AT units in the petrol and diesel variants, respectively, as well.

Every coin has two sides. The Honda CR-V is not an exception with its pros and cons. However, thanks to its surpassing good points, people can easily overlook all of its negative aspects. As a result, the Honda CR-V is not only a popular SUV in the new car market but also in the used car one as well.

IV. How Much does a Pre-owned Honda CR-V Cost?

While a new Honda CR-V is priced from INR 28.27 lakh to INR 32.77 lakh (ex-showroom, New Delhi), the price of a second-hand unit depends on various factors such as the model year, the mileage and most importantly, the condition of the car, etc. Generally, a used Honda CR-V is available with a resale price from INR 80,000 to INR 22,50,000. In the table below, we have compiled a list of pre-owned Honda CR-V by five most-searched cities.

V. Which is Popular Previous Year Model of Honda CR-V on indianauto.com?

While numerous second-hand Honda CR-V offers produced in different model years are available, the most popular production years of the vehicle appear to be from 2014 to 2016.

VI. What is the Fuel Mileage of Used Honda CR-V?

When buying a used car, buyers usually pay great attention to its fuel mileage since second-hand cars are usually notorious for reduced fuel mileage if not well maintained. Refer to the table below for the detailed fuel mileage figures of the used Honda CR-V by its variants. 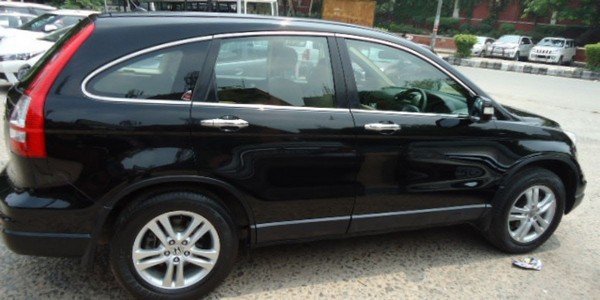