The second-generation Mahindra Thar is said to be underpinned on an update ladder frame chassis. The all-new Thar will make its official debut in 2020.

Ahead of its official unveiling set for some time next year, the next-generation Mahindra Thar has been, once again, spotted testing with the hard top on the Indian roads. The upcoming SUV will share an updated ladder-on-frame chassis with the new-gen Mahindra Scorpio sibling. The new-gen Mahindra Thar is all set to be launched in India next year, the local debut is set for April 2020.

The all-new Mahindra Thar is expected to get an increase in terms of dimensions as compared to the outgoing generation. It will be a little longer and wider than the previous-gen Thar and will feature an evolutionary styling design, both inside and out.

On the outside, the new-gen Mahindra Thar will retain its signature seven-slot grille up front that is flanked by circular headlamps taken from the outgoing version. These lights will continue to be halogen units and miss out on LED treatments in order to keep the costs in check. It will take over a lot of the design cues from the current-gen model such as fender-mounted turn signals or an upright windshield. The rear end of the SUV, as seen on the outgoing Thar, is kitted out with a spare wheel mounted on the side-hinged tailgate. 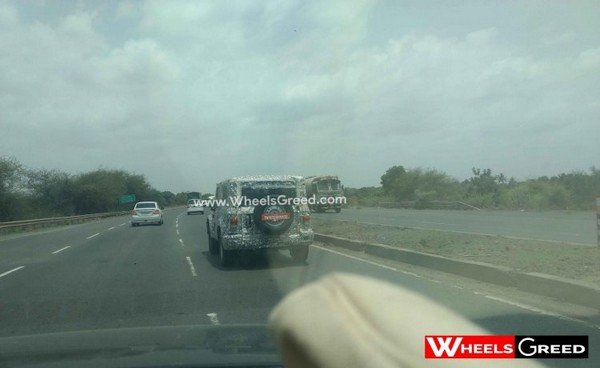 The new-gen Thar has been recently spotted with hard top roof during its test mule in India.

The 2020 Mahindra Thar will comply with the new stricter BNVSAP crash test norms thanks to the utilization of more solid construction and additional safety kits including driver airbag, speed alert, rear parking sensors, etc. in compliance with the AIS 145 safety regulations. Note that the new stringent safety regulations will come into effect from today (July 1, 2019).

According to a set of spy shots, the next-gen Mahindra Thar will get a completely new cabin setting with new dash layout, multi-functional steering, a large MID sitting between the speedometer and tachometer of the instrument panel along with a handful of family-oriented and comfort-focused fitments.

As reported earlier, the imminent Mahindra Thar will be powered by a BSVI-ready 2.0-litre diesel motor making 140 PS of max power and 300 Nm of peak torque. It will come mated to a 6-speed manual transmission as standard along with an optional manually-operated 4WD system. The 2020 Mahindra Thar will stack up against the next-gen Force Gurkha in India.