The next Mercedes GLA, due in 2018, becomes more spacious and more mature.

I’m going to embrace the cliché by beginning this article with a quote: “Money cannot buy happiness. But somehow it is much more comfortable to cry in a Jaguar than it is to cry on a bike”. Of course! Jaguar here is not exclusively referring to the car brand itself, but inclusively synonymous with luxury cars. Well! It is just a joke! We all know that people don’t buy automobiles just for weep in it, right? The thing is my uncle has been boasting about this very reliable Mercedes-Benz GLA of his for a while and it triggers me to learn more about this car whose debut dates back to 2013. Emerging from the same batch of the CLA and GLC, the GLA benefits greatly from the platform of the old but posh A-Class hatch – which at the same time functions as some kind of Mercedes’ mould to produce more cars. So is this vehicle going to live up to my uncle’s words and lend you an opulent space for the business of crying your eyeballs out? We will figure that out in this review.

Apart from the GLA 45 which is paired with the AMG-specific suspension, comfort off-road suspension will appear on all variants of the line-up. This sounds neat like some kind of improvement has been made but our experience of the ride didn’t agree with that, in which the car lacks grip on comfort mode while driving on the uneven road, which is better dealt with sports mode. What’s more is that steering doesn’t respond clearly enough, which means you will need a lot of practice to get used to it. That said, the car has stable body roll no matter what mode you put it on.

As for the powertrain, the 2018 line-up will carry on with the familiar 2.0-litre petrol engine of 183 bhp and the 2.2-litre diesel motor which generates 136 bhp of power. There is no further news on the long-awaited 2-litre oil burner which is so far reported to have not made an appearance on the Indian market. Judging from the outside, the GLA boasts a bigger frame than its A-Class sibling (to be more specific it is the 59mm difference in height). In an attempt to make the GLA appealing to the eyes, the grille gets a refreshed design, being flanked by the two swept-back headlamps. Sunroof (or if you like it, skylight) also makes an appearance in the list of updating. The coupe-like outline is achieved by extending the bonnet and adding a wrap-around windscreen to the previous model’s design. Open the car door to enter and somehow you will start to have a feeling that this is actually a copy of the Mercedes A-Class's, though with some modifications to make its own identity of course. That means you will get a stylish dashboard of triple shades of finish (Dark grey, metal mica and beige). Eye-catching are the round rotary air vents, centre console along with instrument panel and inside door handles receiving chrome treatment. Enough said of fashion, it is the big minus of ergonomics that get the fair amount of frown. Both front and back seats show a noticeable lack of back and thigh support and driver’s posture is limited due to offset pedal’s position.

Another disappointment which could be easily avoided with good design is visibility inside the facelifted GLA. The problem comes from the rear thick roof pillars alongside puny back window greatly impact occupants’ (or more exactly driver’s) sight, making merging in traffic difficult and hindering the act of driving backwards from a parking spot. This rookie mistake can be reversed (well for the next-gen model) by larger back windscreen and slimmer pillars. 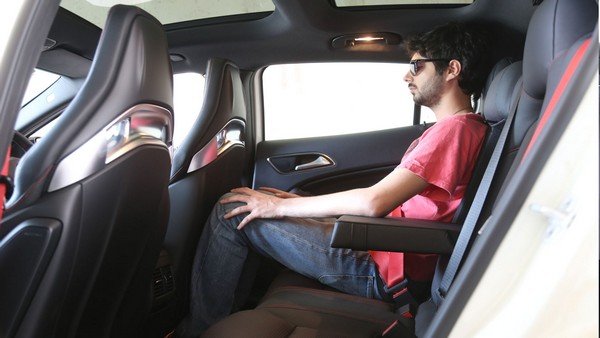 Maybe the most valuable saving grace of all is the cargo space which stands at a competitive volume of 421 litres (having rear seats up). Fold flat the back seat row and you free up another 415 litres of more space for heavy gear and stuff, amounting to a quite likeable storage compartment of 836 litres. By folding flat the rear seats, you add 415 litres of more space to the initial boot and make up to 836 litres for storage

The entire line-up will start with the entry-level 200 Sports petrol variant whose price tag reads Rs. 33.78 lakh. The base diesel version of 200 D Style is priced at Rs. 31.72 lakhs. The pricing continues to work its way through other variants and end with the 45 Aero Edition petrol which stands at Rs. 80.67 lakh.

It doesn’t seem so harsh to give Mercedes a C for the pricing in the case of a premium car like the GLA being compared with its cheaper but outstanding Nissan Qashqai. The fact that it ran a quite fair and complete round of upgrading safety equipment and convenient features doesn’t come near to justifying the inflated sum to get the car. Shortcomings which includes a shortage of cabin space, poor handling and rackety engine, can’t be expected to get balanced with impractical upsides like the handsome dashboard and comprehensive standard kit. Long on style and short on content, you can put it.

Mercedes-Benz GLA and BMW X1 are two popular options in the luxury compact SUV space. IndianAuto will give you a detailed comparison between these two models.