Let's take a look at the next hit from Tata - Tata Hexa, its interior, exterior and performance.

The Tata Hexa was launched in January 2017. Ever since then, it has been a successful attempt at penetrating the market in the SUV market. Besides a rich-feature package,  the Tata Hexa also offers powerful engine options and a premium interior. All of which has contributed to the appeal of Tata Hexa. Tata had earlier impressed with the Tata Tiago, and now, we bring you an in-depth review of the 2018 Tata Hexa.

It is noticeable that the exterior of Tata Hexa has inherited some facets of the Aria. In terms of the proportion, the MPV-like look, and its overall structure, definitely set up the Tata Hexa as a match for the Aria. Despite the familiarity, it is still a modern take on a  fresh design with enhanced looks. Exterior of Tata Hexa bears some similarities to the Aria

Unlike the mild front fascia of the Aria, the Tata Hexa has an aggressive, SUV-like front profile. The black grille and air dam make it look more dominating with the hexagonal details added on. Tata did not forget to include its signature “humanity line”, linking the two headlamps with the rest of the Hexa’s design.  The smoked projector headlamps helps it look smart and sportier.

Tata Hexa from the front 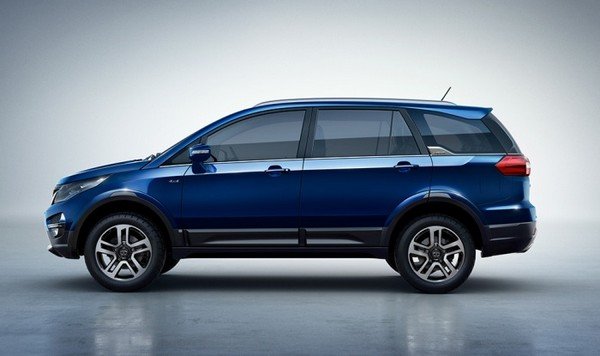 The side of Tata Hexa

Step to the side and the Hexa impresses with its 19-inch five-spoke alloy wheels in the top variants. Compared to the 16-inch alloys of the lower variants, these alloys have a greater visual impact. A chrome strip aligns under the window and stretches all the way to the rear. The rear-profile is neat and simple with a dallops of chrome between the two lamps.

The USP of the Hexa is its premium, feature-rich interior. It features an all-black theme, complemented by a beige roof lining. There are also loads of chrome-plated trim strewn across the interior.

The Hexa’s dashboard features a five-inch touchscreen which serves as the infotainment display as well as the reverse camera display. While the design and placement of switches on the centre console is quite cluttered, it does get lots of chrome and premium-feeling touches. The steering wheel is leather-wrapped, which can be adjusted for rake but sadly, not for reach. The instrument cluster two modern-looking dials for the speedometer and tachometer, with an LCD screen for other information like time, fuel consumption, and drive mode. One of most impressive features inside the car is the ten-speaker sound system from JBL which features excellent sound quality. 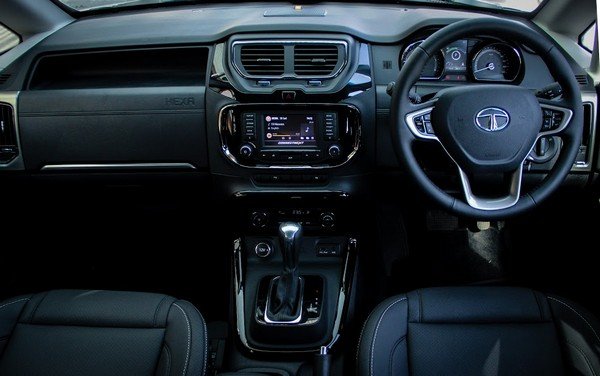 The space inside the cabin can be described as spacious and roomy. It allows for easy ingress and egress thanks to the large doors. The driver seat has 8 different settings for adjust, which will help drivers of every stature find a comfortable driving position.  The first two seat rows provide occupants with loads of legroom, headroom and shoulder room. The third row, on the other hands, seems to be suitable for kids rather than adults. However, despite the rows, all passengers will be seated in comfort with Benecke-Kaliko leather upholstery and necessary features like AC vents in every row and a USB port for charging as well. 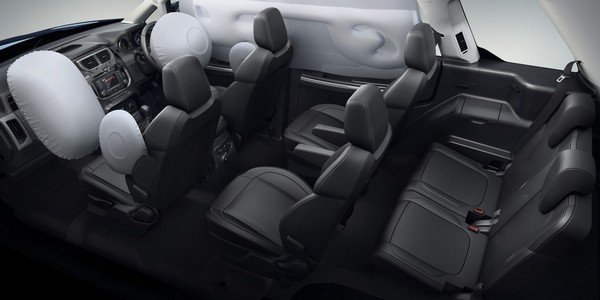 The view of Tata Hexa’s cabin

The lack of sunroof, however, is a disappointment when you compare the cars to all its rivals which do carry the feature. Another common overlook, is the lack of a engine start/stop button in the Tata Hexa, which is common in every car in its range. The lack of sunroof is a disappointment in regard to the exterior. Tata Hexa also fails to have a starter button which is common for a car of the premium section.

Tata Motors offer only one diesel engine options in the Hexa but in two different versions. This is the familiar 2.2-litre VARICOR diesel engine that comes into 2 different states of tune, the first is the 150bhp/320Nm version and the second gets 156bhp/400Nm. The latter is restricted to the higher variants – XM and XT and mated with a 5-speed manual gearbox; whereas the former is available for XE variant. The top-end variants with the more powerful engine get the option of either a 6-speed manual or 6-speed automatic transmission. The top-spec XT 4x4 is exclusively paired with the 6-speed manual gearbox. Despite the impressive power and torque figures it gives, Hexa still falls behind other cars from the same segment in term of power-to-weight ratios. These low figures are the result of an imposing kerb weight of 2,280kg.

When it comes to its driving dynamics, the Hexa does manage to keep the layman happy, but would not impress the enthusiasts. The Hexa has a light clutch and is easy to manage while maneuvering in the city. On the highway, cruising at high speeds above 100 km/h is a fairly easy task. In general, the performance is competent.

The NVH level of the diesel is acceptable at low speed driving conditions. The engine is not particularly peppy and rev-happy with noticeable turbo lag below the 1500rpm mark. Th Hexa also gets multiple drive modes which including Auto, Comfort, Dynamic and Rough Road, available in manual gearbox version. Auto mode is ideal for most driving situations. On the other hand, Comfort mode works to provide a more comfortable drive and is the most fuel-efficient driving mode. As a result, power doesn’t come in as lively as it does in other driving modes. Dynamic mode promises a more exciting drive and works best while driving on highways. Finally, the Rough Road mode, as the name might suggest, is optimum for off-road driving conditions.

With the automatic transmission variants, the Hexa gets even lower levels of NVH. The transmission is conveniontional CVT unit with a 6-speed configuration. It gets a Sports mode which enables to be driven more eagerly and aggressively.

The Tata Hexa gets Double Wishbone Type with Coil Springs at the front and back, and works beautifully on Indian road conditions. Even when driving on bad roads with excessive bumps, the suspension still works wonderfully. Even more surprisingly, the high speed doesn’t affect the firm handling either. The Hexa completely trumps its competitors like the Innova Crysta in this regard.

However, the steering feel is its major drawback compared to the wonderful handling. It is heavy when parking or driving at low speed, which requires a certain amount of work in city driving. On the highway, the steering starts to weigh up well but is still not as responsive as its competition.

The safety features of the Hexa include a total of 6 airbags, an electronic stability program, traction control, hill ascent and descent control and anti-lock brakes. There are 6 variants available to choose from - XE, XM, XMA, XT, XTA and XT 4x4. The price of Tata Hexa ranges from INR 12.49 to INR 17.63 lakh (ex-showroom).

The true rivals of the Tata Hexa include the Mahindra XUV500 and the new Toyota Innova Crysta.

The Tata Hexa Safari Edition was expected to launch in 2020 itself, but it didn't happen as the engines failed to meet BS-VI emissions. But Tata has now confirmed the updated Hexa is launching in 2021.

Tata Hexa will soon re-enter the Indian car market, albeit, in a BSVI avatar, along with the Safari Edition model that was showcased at the Expo

Recently, Tata Hexa Safari Edition was spied during testing. The launch of new new Hexa will mark the return of this model to the Indian car market.